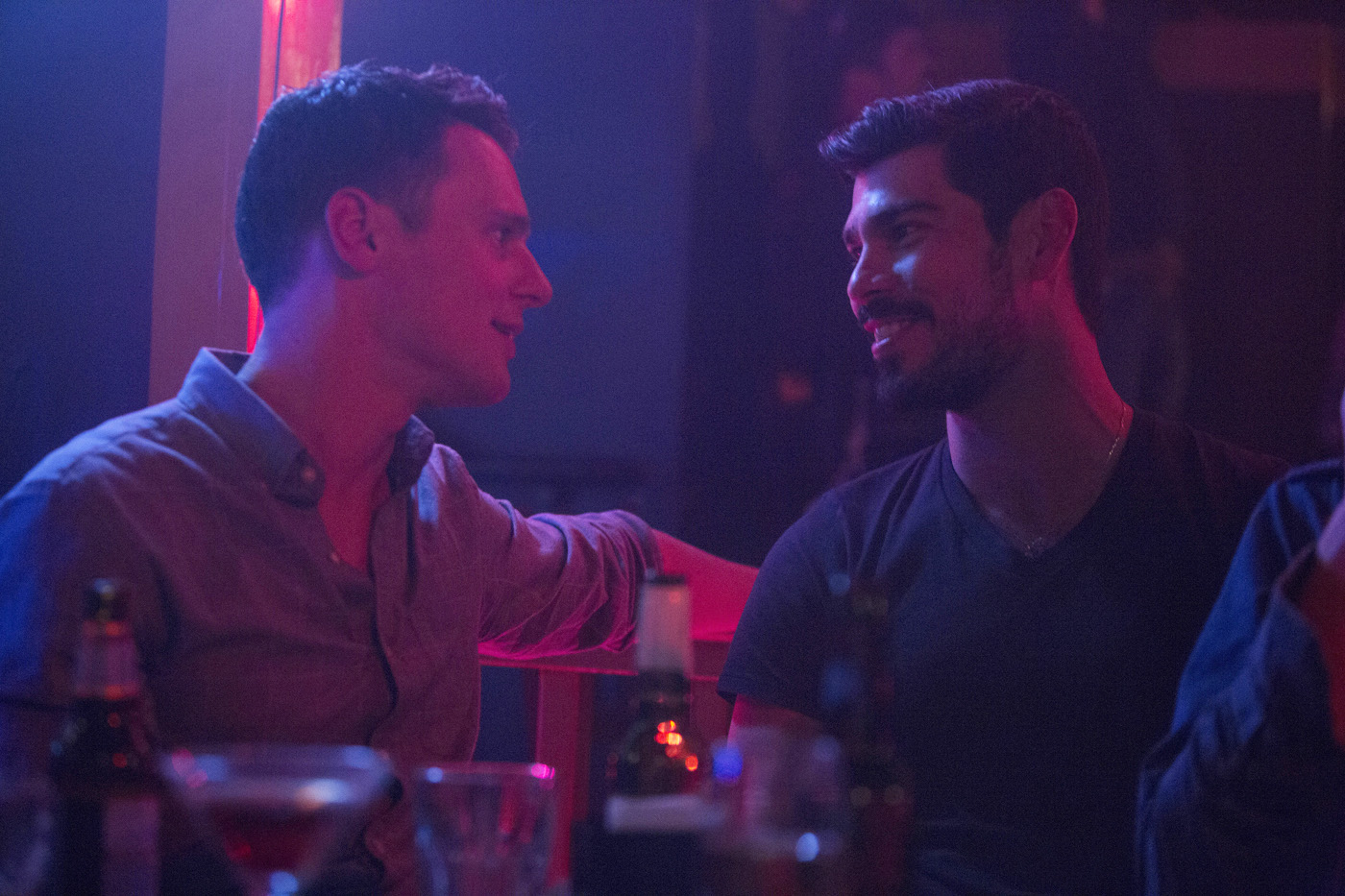 There’s a moment in the opening minutes of Looking: The Movie that feels like old times, or lost youth (it can be tough to tell the difference). Pressing against each other in a semicircular booth, sipping Mai Tais under a faded mural, Patrick (Jonathan Groff) and his friends revive arguments and repurpose jokes, slipping into the rhythms of their bygone days together. It’s an unassuming sequence, peppered with details about the characters we’ve come to know, but it’s also a potent one, sketching the faint outlines of a former life. A year since fleeing San Francisco for Denver, in the aftermath of “Looking for Home,” Patrick is in town for a wedding, and his return is a reckoning—with Richie (Raúl Castillo), with Kevin (Russell Tovey), with the person he was, is, and perhaps still hopes to be. In the movie, a lovely, bittersweet coda to HBO’s underappreciated series, even the references to what’s changed are a kind of reminiscence. Exquisitely nostalgic, it’s as comfortable, and as complicated, as a reunion with an old friend, poring over the past in search of its promise and risking the sharp pang of regret.

In focusing on Patrick’s desire to “close the chapter” and “bury the dead,” Looking: The Movie adopts his perspective, seeing the ensemble’s successes through his eyes. As Dom (Murray Barlett) watches his restaurant grow, Doris (Lauren Weedman) revels in her relationship with Malik (Bashir Salahuddin), and Agustín (Frankie J. Álvarez), still with Eddie (Daniel Franzese), settles into a new gig, intimations of their own anxieties bubble to the surface, but Patrick’s longing suffuses the movie with an idealistic glow. He suspects he’s the last of his friends to figure it out, and Andrew Haigh’s observant direction, floating through nightclubs and the city’s streets, encourages empathic treatment of these doubts. As the image of Patrick alone in a mirror dissolves into a long, lingering pan across couples embracing and kissing, pairs blurring together into perfect wholes, the movie captures the poignant sense of incompleteness that we call disappointment. “This does not last forever,” Doris assures Patrick, seeing in his expression something she’s been through herself. But for those in the midst of it, “this” can indeed appear infinite, its resolution out of reach.

If the movie, written by Haigh and series creator Michael Lannan, seems slight at times, in particular as it reduces Richie’s boyfriend, Brady (Chris Perfetti), to a smug caricature, its depiction of a life at loose ends is nonetheless affecting, built from the naturalistic precision that’s defined the series from the start. It may be that I, too, am in San Francisco for a friend’s wedding, spending my time reflecting on the recent divergence of the life I’m leading from the one I’d planned, but Looking: The Movie cuts remarkably close to the bone—in particular Patrick’s determination to go back over the preceding decade, as if the act of remembering might reshape the present. While the camera drifts through familiar locations (Patrick’s former apartment, a bar called The End Up) and acute sensations (bad blood; cold feet; a steamy, tender fuck), the movie suggests the act of paging through a photo album, fingers caressing certain images, flipping past others. It’s more selective in its attentions than the series was, with fewer jagged edges and more clean lines, but it mimics the ache of life’s interstitial moments in meticulous detail, earning the sentimental affect of its conclusion: “What happens when you’ve sobered up, and the wedding’s over, and you’ve lost this sense of romance?”

By the time the camera retreats for the last time, in a deft allusion to “Looking for Home,” Looking: The Movie can offer no firm answer, except perhaps that the only cure for the romance of retrospect is the leap of faith—the new home, the new career, the new marriage—that forces one to “adapt,” as a justice of the peace (Tyne Daly) counsels, if not quite to “change” completely. The movie recalls not Joan Didion’s “Goodbye to All That,” to which I made reference in my “Looking for Home” recap, but “On Keeping a Notebook”: “I’ve already lost touch with a few of the people I used to be,” Didion writes, and this swansong, despite the warm optimism of its final sequence, also replicates her half-rueful remark. Move forward, Patrick urges himself. Close the chapter. Bury the dead. But his notion of the man he is, or was, remains integral to the man he might become. The one specter none of us manages to fend off is that of our former selves. We’re running into them all the time.

Review: The Get Down: Season One