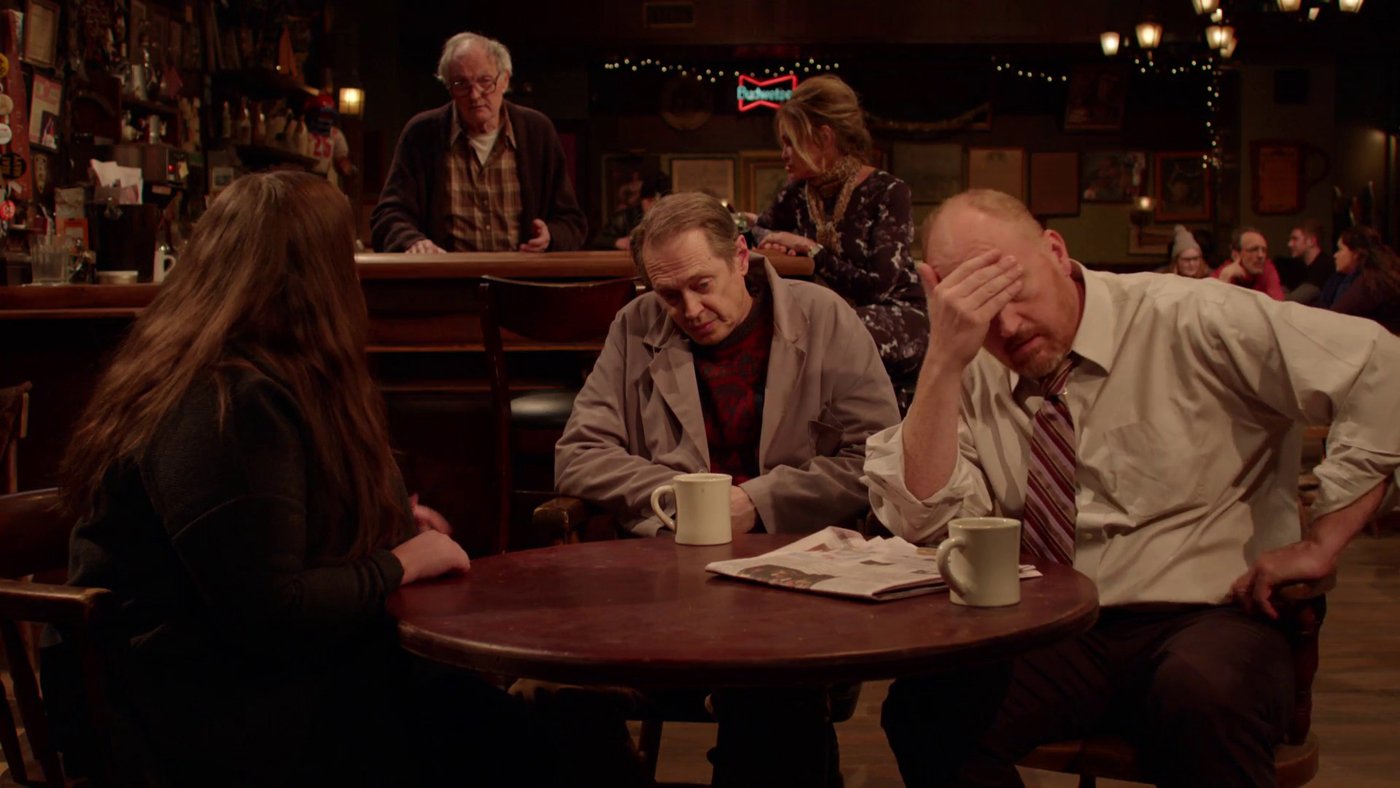 While most dramatic TV shows now strive to emulate the lush production values of cinema, Louis C.K.‘s Horace and Pete embraces its resemblance to theater, vintage broadcast programming in the tradition of Playhouse 90, and multi-camera sitcoms, confining itself primarily to two settings that are obviously sets, which characters enter and exit with poetic decisiveness that’s captured mostly in master and medium shots. The dialogue, however, is pointedly modern in sensibility: ornately pared down, declaratory, contemporarily political, prickly, self-scrutinizing, and subtly obvious.

C.K. has a prodigious ear for the way people reveal themselves intentionally in keeping with their personas, while signaling something deeper and less controlled in the process. Horace and Pete, then, has something pivotally in common with its characters: It’s mannered and vulnerable, polished and neurotically raw, each quality informing the others in surprising and resonant dimensions. The series feels like a catharsis for its creator, an announcement of some yet-to-be-defined transition in C.K.‘s art-making.

Most importantly, and of probable inspiration to future productions, C.K. resists the insidious striving for faux-“reality” that governs so much popular art. Horace and Pete is defiantly artificial, calling attention to its own construction, which oxymoronically empowers the series to plumb emotional realms unreached by most television, rendering it vividly real. The wedding of TV-industry formalities with C.K.‘s own obsessively verbose parables of tolerance and empathy cumulatively serves to interrogate the “rules” of anticipation and payoff that govern most TV shows, questioning the rules of social life by extension and implication, pinpointing the arbitrariness of much convention, highlighting the control over our own lives that we unquestioningly cede. Or simply, C.K.‘s freedom and confidence as an artist serve as a counterpoint to the constriction felt by his characters.

If anything is possible in life and art (and why shouldn’t anything be possible for a talented and affluent artist like C.K.?), the show’s denizens have either forgotten it or never knew it to begin with. Horace and Pete’s character are trapped in a fugue state so pronounced and relentless it resembles hell. Most of them are alcoholics essentially living at the titular bar, and a few, perhaps even sadder, are on the wagon, but can’t leave their old lifestyle behind, forever eavesdropping on the baroque miseries aired by those drunk and capable enough to spin their lives into gutter arias.

The series is about inherited pain, genetics as a real-life manifestation of classical tragedy. Horace and Pete’s is a bar that’s existed in Brooklyn since 1916, run by varying generations of men with the same names. These men are usually brothers, sometimes cousins, depending on how mating rituals worked themselves out. The present-day owners of the bar are Horace (C.K.) and Pete (Steve Buscemi), brothers somewhere around their 50s who’re haunted by the abusive legacy of their family. A deeply bigoted elder Pete (Alan Alda) lingers on as a bartender, making up his own salary and floating Horace Sr.‘s former lover, Marsha (Jessica Lange), on a tide of free booze. Other hangers-on include Leon (Steven Wright) and Kurt (Kurt Metzger), who have an informal dog-and-pony show composed of the former’s laconic decency and the latter’s embittered conservative outrage. Potentially unsettling this stably unstable habitat is Sylvia (Edie Falco), Horace and Pete’s sister, who’s suing for the right to sell the place off.

C.K. drops us into the bar mid-narrative, allowing us to figure the various relationships out for ourselves, with exposition often arriving unexpectedly when a character breaks their silence to perform an elaborate monologue (like much theater, the line separating the performances of the actors from those of their characters is murky). Guest stars come and go, most memorably Laurie Metcalf, playing a tormented housewife who airs an astonishing confession that lasts nearly an entire episode, painting a woman’s adult life in Cheever-worthy evocations that are intensified by Metcalf’s own performative rhythms, which involve a withheld ferocity that gradually loses its tether.

Another highpoint is an awkward morning-after encounter between Horace and Rhonda (Karen Pittman), a sensual “drunk,” to use her word, who questions Horace on his tolerance of transgenderism, bringing to mind the famous Louie episode in which the hero’s empathy for overweight women was similarly scrutinized. In Louie, C.K. allowed the scene in question to collapse into preachiness. In Horace and Pete, he grounds a topical point in suspense (was Rhonda once a man?) using the viewer’s own mounting discomfort as a sophisticated means of audience implication.

Though C.K. is clearly striving for a masterpiece with Horace and Pete, often allowing his work and his self-consciousness to show, the series abounds in casual brilliance. C.K. somehow makes it look sort of easy to recruit all these great actors and redefine their presences in startling fashions. Buscemi has given dozens of wonderful performances, but the sadness that drives most of his roles crystallizes here in a way that feels revelatory. Near the end of the series, C.K. gives Buscemi one of the greatest scenes of his career: When Pete’s told that he will have to go off an experimental medication, which might lead to his re-institutionalization, he breaks down in the doctor’s office and cries, succumbing to the loneliness and self-hatred that he’s been battling with resigned hopefulness. It’s a moment of staggering vulnerability.

There’s at least one classic sequence in every episode of Horace and Pete, cumulatively justifying and transcending C.K.‘s obsession with narrative traps. The writer-director-actor has more in common with Woody Allen than roots in stand-up comedy, as both spin stories that work from theses. Both artists correctly resent the flimsy uplift that pop culture uses to nurture hope in despondent, rote-thrill-seeking audiences, and both have a fatalistic view of life that they probably see as objective truth. Unlike the Allen of many recent films, C.K. has the curiosity and the empathy to allow his characters to breathe within that frame, though it grows oppressive.

There are no moments of levity in the series, only the bone-dry absurdism that emanates, perhaps inadvertently sometimes, from the predetermined aura of mercilessness. And there are maybe three encounters in the entire production that allow for any even qualified joy—and those are mis-directions designed to distract the audience from an incoming deathblow. Pete has dinner with Jenny (Hannah Dunne), a much younger woman he met online, and they hit it off after overcoming initial awkwardness, achieving a beautiful, wounded rapport that testifies to C.K.‘s gift for portraying happiness as something hard-won and ripped from the jaws of insecurity and personal damage. But this scene is preparation for Sylvia’s loathsome attack of Pete for Jenny’s benefit, which is filtered through Sylvia’s battle with breast cancer, her own loneliness, and resentment of Pete for things that will be revealed later, and so on.

On its terms, it’s an amazing moment, especially for Falco’s fearlessly visceral performance, but it feels like a narrow betrayal of what might have been an expansion of the show’s vision. C.K. pulls this bait and switch again in the final episode, preempting desolation with connection, not quite attaining the grandeur for which he’s clearly aiming.

Yet C.K. ultimately achieves, with Horace and Pete, something that’s exhilaratingly clean in its bleakness and eye-opening in its refusal to spare any of its characters anything; it’s about the bravery of maintaining some semblance of optimism and decency in an existence that C.K. sees as doomed and pitiful. Horace and Pete evokes the spirit of a Charles Bukowski or Raymond Carver story, or of a Tom Waits song, heightening our petty ways of letting ourselves down into the stuff of legend.