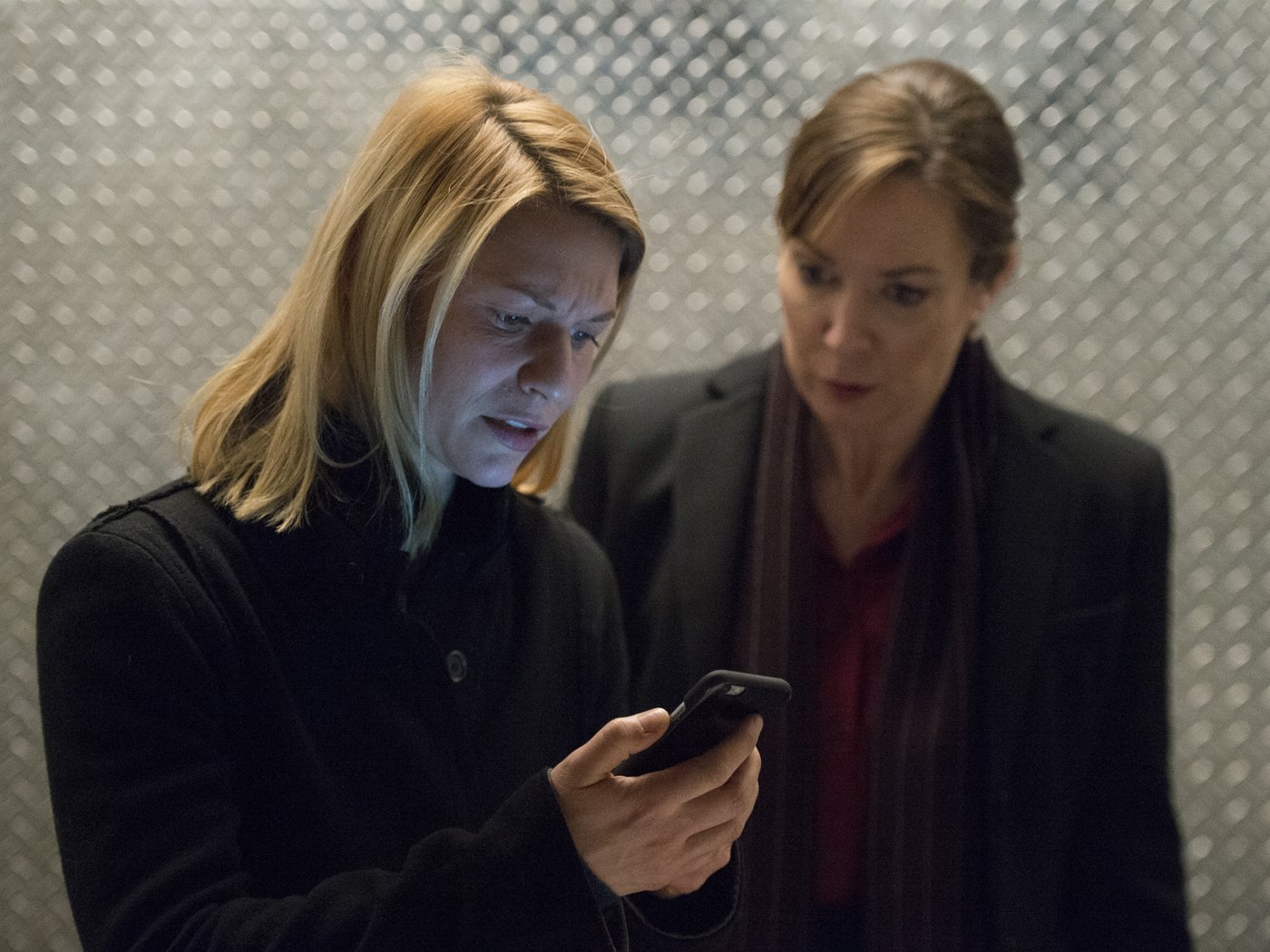 For 11 episodes, Homeland has been burying its lede in plain sight, making us believe that its sixth season was little more than a traditional spy thriller. Many pains were taken to establish a “deep state” conspiracy, led by Dar Adal (F. Murray Abraham) and General Jamie McClendon (Robert Knepper), and shamelessly abetted by the right-wing propaganda machine of talk show host Brett O’Keefe (Jake Weber). “America First” plays along with that ruse for much of its running time, sending Carrie Matheson (Claire Danes) and Peter Quinn (Rupert Friend) on a last-ditch mission to save President-elect Elizabeth Keane (Elizabeth Marvel) from some sort of half-baked military coup.

While this setup does in fact lead to a major assassination attempt against Keane, it’s so hastily resolved and light on action that it quickly becomes clear that Homeland isn’t really interested in the conspiracy itself so much as the lingering, paranoia-inducing effects of such a betrayal. An abrupt cut to “six weeks later” makes this abundantly clear. Audiences don’t get to mourn Quinn, who dies in a spectacularly sacrificial hail of bullets while driving Keane and Carrie out of the military’s kill zone, because a certain point must be underlined: that the entirety of this season has actually been a stealth origin story, one that charts President Keane’s Orwellian rise to power.

In the episode’s first half, Saul Berenson (Mandy Patinkin) presents a thesis statement for this origin when he suggests to Keane that people consider her so dangerous because she can’t be controlled from within. And toward the episode’s end, a now-incarcerated Dar confirms as much, suggesting that while his actions may have been unforgivable, and certainly darker than he intended, they weren’t necessarily wrong. “There’s something dogmatic and dangerous, something distinctly un-American,” says Dar of Keane. As it turns out, he was right—even if it’s some kind of self-fulfilling prophecy.

Keane’s paranoid, vengeful, and illegal actions against the intelligence community (only a few of whom tried to control and kill her) have made O’Keefe look prescient: In just 36 days, the new president has expanded the Patriot Act, diminished the rule of law, and thrown 60 elected officials into military prison. Carrie, in her new temporary role as a liaison to the president, tries to reassure high-ranking (and innocent) individuals, like Rachel Crofts (Orlagh Cassidy), the C.I.A. deputy of counterintelligence, that Keane isn’t planning some sort of purge and that the arrests of people like Senator Coto (Alfredo Narciso) were justified given the depths of their treason.

But by the episode’s end, it’s revealed that Keane and her new chief of staff, David Wellington (Linus Roache), have merely been using Carrie to keep the intelligence community complacent while she sets about detaining them based on N.S.A. metadata; Saul himself, who almost died trying to protect Keane, is arrested by members of Keane’s administration at gunpoint. In the episode’s most chilling scene, Keane sits isolated in the Oval Office, sipping her water in an almost psychopathically calm fashion as Carrie begs her to reconsider her most recent wave of unlawful detentions, yelling through the closed door as Secret Service officers escort her from the White House.

The episode intensely homes in the on the very moment in which Keane snaps and becomes a monster. The van carrying Rob Emmons (Hill Harper), her chief of staff, has just been blown up, and Agent Thoms (James Mount), her bodyguard, has just been executed by two of McClendon’s Delta operatives. Carrie pauses to try and rally Keane, to keep her from going into shock. “Either we stay here and pray they don’t find us,” begins Carrie, only to have a practically hyperventilating Keane interrupt her: “Let’s get the fuck out of here. I can’t sit here doing nothing.” After choosing action at any cost, Keane ends up surviving only because a loyal soldier, Quinn, is willing to sacrifice himself to put her, and Carrie, first. Is it any surprise, then, that she still feels the need to strike back and assert herself?

In retrospect, Keane’s actions are nothing if not consistent with everything we’ve seen from her up to this point—such as her increasingly dominant confrontations with both Dar and O’Keefe—and with the mentality of her closest advisors. Look at how Carrie bristles when Saul suggests that he’s worried about her. “Well, maybe I don’t like the idea of you worrying about me anymore.” Re-watch the moment in which Saul praises Keane for having balls, which, for Keane, is a massive step up from being written off as a bitch.

Everyone is a pawn in someone else’s power play, but one wishes that Homeland didn’t have to give the short shrift to pivotal characters in order to make that point. Quinn’s memorial service is mentioned only in passing, in a terse scene between Carrie and Saul, while Max shows up drunk at Carrie’s doorstep for no apparent reason other than to give her a shoulder to lean on. The moment when Carrie discovers images of herself among Quinn’s prized cache of photos of his son whom he never met (they’re hidden in a copy of Great Expectations) is so conspicuously shoehorned in the middle of two other hastily resolved scenes that it barely registers as a posthumous expression of mutual love. America first, literally, and forget the little people.

Ultimately, “America First” serves as a prologue to next season. The final shot works wonders to establish a seismic paradigm shift, the framing such that Carrie, in black, stands relatively equal in size to the Capitol building. It’s an epic setup for what looks to be a David-versus-Goliath dustup. But Carrie’s distance from the building and the politics it represents also speaks to the fact that Homeland’s sixth season, while it did well to pose its characters in clear opposition to one another, often kept the audience at arm’s length, rarely allowing us to get inside anyone other than Keane or Carrie’s head.