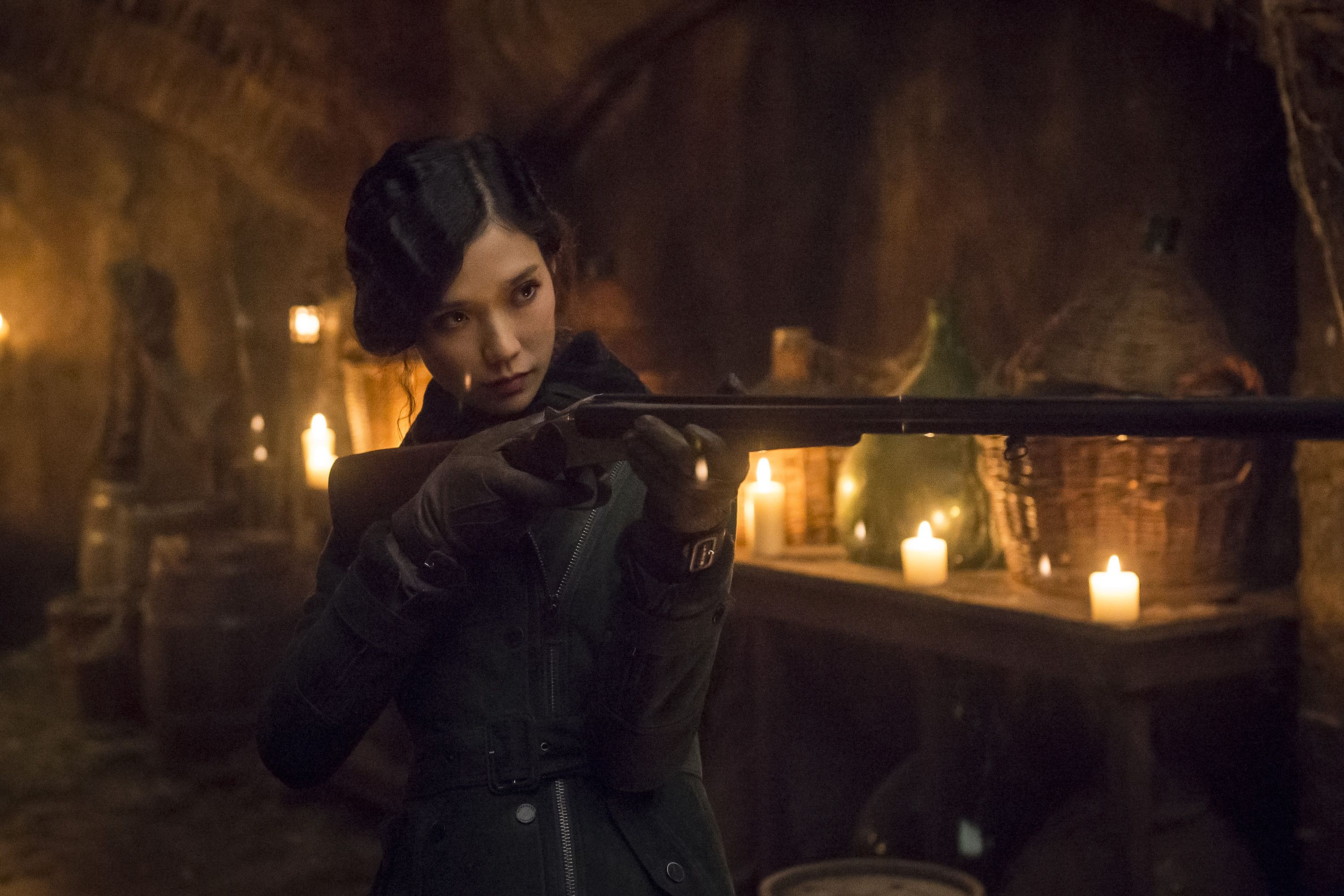 The change in locales on Hannibal, from the American East Coast that dominated the first two seasons to Europe, has unleashed a latent giallo gene in the series, with emphasis on the genre’s lush colors and tendencies to favor emotional textures over the literal. “Secondo” switches things up a bit, fusing the giallo with the gothic stylistics of the classic Hammer horror films that often featured Christopher Lee and Peter Cushing. Will’s (Hugh Dancy) decision to forge ahead into Lithuania, where Hannibal (Mads Mikkelsen) grew up, sends the series into the woods and fog of the latter’s troubled psyche, intensifying the titular antagonist’s similarities to Count Dracula. The land of Hannibal’s home is even mysteriously said to contain places on which he cannot tread, like a vampire in relation to hallowed ground.

The suggestion that Hannibal and Will are enacting some sort of love ritual is no longer treated as subtext; they’re both copping to that now, using that openness as a springboard for a new set of riddles that are even more cryptic and free-associative than before. Hannibal is Dracula, all-powerful, seductive, seemingly able to read minds, sowing the seeds of his influence and destruction throughout Europe, while Will is a combination of Jonathan and Mina Harker, serving as Hannibal’s dogged pursuer as well as the object of his highest fascination. True to the episode’s title, which refers to a musical duet, the narrative is composed of a series of alternating two-person dialogues (as the entire season has been so far) that all serve the ultimate, taboo dialogue that’s driving all the plot’s machinations: between Hannibal and Will. How do two people reunite after one literally guts the other? Sure, Hannibal could’ve decisively killed Will, as he did Abigail, but how much gratitude does one extend such a qualified courtesy?

Everyone’s talking about Hannibal and Will. Hannibal and Bedelia (Gillian Anderson) engage a debate on the similarities between the betrayer and the betrayed, the lover and the loved, so convolutedly purplish as to be funny. Jack Crawford (Laurence Fishburne) is revealed to have survived last season’s bloodbath, wandering the Norman Cathedral in Palermo, striking up a conversation with Inspector Renaldo Pazzi (Fortunato Cerlino) about the Monster of Florence, saying that he’s in Italy to find Will, not to hunt Hannibal, though the quests are impossibly intertwined. Jack speaks the audience’s mind when he wonders, perhaps, if he and Will are dead, casting light on the pall that has descended on this already macabre series. One is beginning to dread what awaits the characters in America, which has been so far unseen this season. What happened in the wake of the bloodbath? How are its participants able to wander the world so freely, even eight months later? These characters seem to belong to a dream, a fugue state, wandering in and out of one another’s realities willy-nilly, with only emotional limitations to bind them.

There are two other prominent duets, between Will and Chiyo (Tao Okamoto), and Will and the Hannibal of his imagination, whom he consults to find the Lecter family estate, or “Lecter Dvaras.” The Hannibal of Will’s mind, who speaks to him while the two sit in leather chairs in the forest surrounding the Lithuanian grounds, tells him that this place is the door at the center of Hannibal’s mind and “here you are, feeling at the latch.” This vision segues into another, accompanied by the metaphor of glass shattering, and Will and Hannibal are suddenly sitting in the latter’s old office in Baltimore, discussing Hannibal’s greatly debated memory palace, which has rooms with contorted recollections that Hannibal vividly likens to “great snakes wrestling and heaving in the dark”—an unmistakably sexual image, which, one must remember, belongs ultimately to Will’s consciousness. Other memories, Will’s Hannibal says, are fragmented like shards of glass, and this comparison is literalized by the image of the conversation itself, which is filmed through what appears to be a glass scrim that’s divided into diamond-shaped shards.

Will’s powwow with faux-Hannibal leads him to Chiyo, after quite a bit of atmospheric skulking about on the old Lecter estate. Like everything else in this series, the fog in the surrounding woods is drawn more from nightmares than reality, particularly when Will memorably follows lightning bugs into it, coming upon a statue of an angel that stands in a clearing. At the base of the statue is a bloody handprint. Is this where Hannibal’s sister, Mischa, died under ever-murky circumstances? At the bottom of the statue are hundreds of snails, shot in intense close-ups that emphasize their alien-ness, while the sounds of their crawling and feeding are amplified to an unnerving degree that suggests an aural encapsulation of the land’s pervading malevolence. This heaps a retrospective layer of perverse significance onto Hannibal’s cultivating of snails upon the detached arm of Abel Gideon earlier in the season. Add to this a few of Hannibal’s go-to pillow shots (close-ups of animals, in this case a chicken, being butchered, which are contrasted in a montage with Hannibal’s loving preparation of a human subject to serve as high-couture dinner to clueless guests) and you have an aura of fairy-tale dread that’s in high tide even for this series.

Chiyo is revealed to be another mysterious woman of Hannibal’s past, keeping a prisoner in a crypt, in a situation that evokes both Dumas’s The Count of Monte Cristo and Poe’s “The Cask of Amontillado.” Snails abound in this crypt as well, most spectacularly crawling on a green orb, their antennae twinkling. The prisoner killed Mischa, until it’s revealed in adjoining conversations between Hannibal and Bedelia that he didn’t—or maybe the latter’s lying, or maybe Chiyo’s lying. The prisoner, feral, insane with prolonged enclosure, feeding from the snails, is hardly in a position to account for himself. Hannibal devoured Mischa for the emotions she stirred in him, foreshadowing how he might resolve the confusion that Will now strikes in his heart. Or maybe both the prisoner and Hannibal killed her.

This is all growing rather fussily symbolic, occasionally bordering on the tedious, as parallels upon parallels are affixed to the primary thread existing between the leads. “Secondo” is thrillingly, commandingly stylish, one of the most beautifully staged episodes yet in the show’s canon, but it’s beginning to feel as if creator Bryan Fuller and his collaborators are dawdling a bit. There are too many studied unknowns floating about, with more cropping up in every subsequent episode. It’s time, for instance, to elaborate on the motivations driving Bedelia, who’s functioned mostly as a stiff partner for Hannibal to trade exposition with, while periodically flashing lovely skin to keep the mood of debauched eroticism simmering. Is she Hannibal’s beard, lover, captive, or all of the above? Is she getting off on her partner’s misdeeds? (Tellingly, Bedelia doesn’t eat her friend’s dishes, preferring to feed on oysters.) Her feelings have been unclear for three seasons, and the ambiguity is beginning to scan as a narrative convenience, rather than as a deliberate building block in the mounting mystery of Hannibal Lecter.

That said, Hannibal appears to be on the verge of undergoing a major shift again. Bedelia tells Hannibal that he’ll be caught, that those events are already underway, and we believe her, partially because it seems as if he wishes to be caught, perhaps so he can play the role of caged master criminal to Will’s dogged pursuer of other killers—a development that’s almost certainly a part of the show’s destiny. Or, if Fuller really wants to push Hannibal’s insanity, Will and Hannibal will join forces as Hannibal and Clarice Startling controversially did in the novel that lends the series its title. Either evolution, even the one involving capture, would signify a sort of return to stability for Hannibal, whose been left adrift by his new Will-less freedom abroad. Correspondingly, Will seems to be embracing his inner serial-killing mastermind, manipulating Chiyo’s murder of the prisoner, whom he strings up as a gift offering for Hannibal, weaving the body into a depiction of a cross between a moth and an angel, which the snails now feed upon. Hannibal and Will want so badly to dance together.