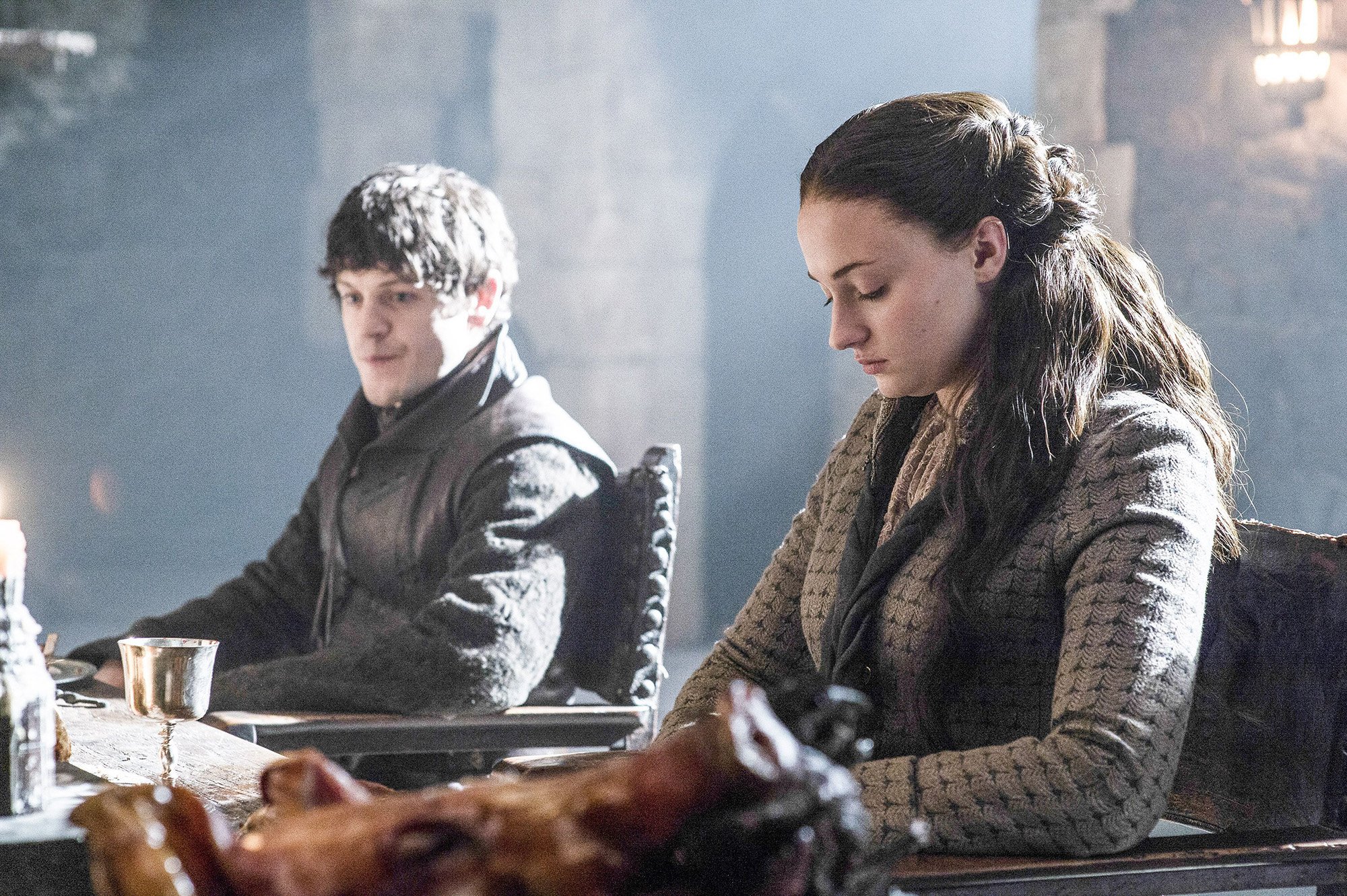 The difference between a boy and a man, explains Maester Aemon (Peter Vaughan), is that the former asks others what to do, while the latter simply does what he believes needs to be done. “Kill the boy,” he cautions Jon Snow (Kit Harington), “and let the man be born.” Lest one think this is a particularly sexist and backward view for the citizens of Westeros, Daenerys (Emilia Clarke) receives similar advice from her translator, Missandei (Nathalie Emmanuel), in the wake of riots throughout the occupied city of Meereen. The episode begins with Daenerys taking the advice of Daario Naharis (Michiel Huisman) and threatening the elite of the city into submission, feeding one of its leaders to her dragons as the others watch: “A good mother never gives up on her children. She disciplines them if she must.” But by the end, Daenerys realizes that she can’t appease others, and must rule with a mixture of her firm beliefs and the existing traditions of the city, taking Hizdahr zo Loraq (Joel Fry) to the extremes of his word as she agrees to reopen the fighting pits—to free men only—and also announces that she’ll be marrying him in an act of unification. The girl who wished only to do what was right has died; now rules the woman who’s willing to do what must be done.

For Jon Snow, this means reaching out to Tormund (Kristofer Hivju), the imprisoned second-in-command of Mance Rayder’s fallen Wildling army, and setting him free, despite the rage this inspires from those on the Night’s Watch who have spent thousands of years fighting against them. But Jon recognizes the greater threat of the white walkers—an army of the dead—and knows that without unifying his men and the Wildlings, they will all fall. A boy like Olly (Brenock O’Connor), who watched the Wildlings massacre his family, can’t see past his past and present rage; a man like Jon must be able to see the future, too, and that’s the one in which he unifies his men and—as Davos (Liam Cunningham) suggested to him a few episodes back—lives up to the oath they swore, which is to be “the shield that guards the realms of men,” Wildlings included.

This is a similar conclusion to the one reached by Stannis Baratheon (Stephen Dillane) on the eve of his march to retake the north. As he mentions to Samwell Tarly (John Bradley-West) as they share a moment in the archives of the Night’s Watch, he recognizes that while he can conquer Winterfell and retake the throne from the usurpers at King’s Landing, none of this will matter if they can’t discover all of the weaknesses of the massive army of the dead that his sorceress, Melisandre (Carice van Houten), has warned him is coming. It’s for this reason that he continues to aid Jon in his quest to recruit the Wildlings and bring them south of the Wall, lending Jon his ships and a small portion of his forces. A boy, finding his request for aid rebuffed by Jon, might be petulant and lash out; a man, like Stannis, recognizes the greater need and does what’s best for all.

The problem these men face is that there are plenty of boys who find themselves in positions of power, and that’s not even mentioning King Tommen in King’s Landing. The more immediate threat is that of Ramsay Bolton (Iwan Rheon), who makes his first appearance in the episode while naked in bed, explaining to one of his playthings, Myranda (Charlotte Hope), the kennel master’s daughter, that now that he’s no longer a bastard, he can’t marry her. He mistakes being recognized as the son of Roose Bolton (Michael McElhatton) as the sign of maturation, failing to realize that his inability to put anyone’s needs before his own is what stunts his growth. He threatens Myranda, pointing out that he owns her and that she, who has abetted him in some of his games, knows better than most what happens to those who bore him (it likely involves him boring them with a drill or some other instrument of torture); later, he acts boorishly at dinner with his betrothed, Sansa Stark (Sophie Turner), as he parades Reek (Alfie Allen), the man she once knew in Winterfell as Theon Greyjoy, before her, forcing him to serve wine and apologize for apparently murdering her two brothers. Though Sansa should be furious with Reek, she’s no longer the little girl who cannot control her emotions; instead, the only flicker of emotion comes when Roose announces that his new wife, Walda (Elizabeth Webster), is pregnant with “what feels like a boy”—a discomforting fact (to Ramsay) that she may be able to use to sow discord between the two Boltons.

Also on this list are those men who worry now that they may in fact be boys, after all. The Unsullied warrior Grey Worm (Jacob Anderson), having survived multiple stabbings at the end of the previous episode, confesses to Missandei that he has, for the first time, felt the shame of fear. Not of death, however, but rather a fear that he might never see Missandei again, which is a reminder that no matter how much we steel ourselves to make the right choices, love ultimately makes boys of us all. This is something that may come back to haunt Stannis, for while he has the superior army and the righteousness on his side, he’s also brought his family with him to besiege Winterfell, and as he confessed in the previous episode, there’s little he wouldn’t do for his beloved daughter.

All of this talk leads us, in the end, to Jorah Mormont (Iain Glen), who continues to sail his prisoner, Tyrion Lannister (Peter Dinklage), toward Meereen as directly as possible. Both of these characters have fluctuated between childish and mature behavior. Tyrion, who agreed to travel with Varys to see Daenerys only because he could just as easily drink himself to death there as anywhere else, is once again petitioning Jorah to provide him with some wine. Jorah, meanwhile, wound up exiled from Daenerys’s side because he had been putting his own needs first, feeding intelligence on his queen to the Small Council back in Westeros proper, and stumbled upon his chance at redemption (Tyrion) only while drinking himself silly in a brothel. But as the two sail through the ruined city of Valyria, a once-great empire, their petulant needs are cowed by this awesome reminder of true magnificence and absolute despair. (How very Ozymandias-like.)

As the two see one of Daenerys’s dragons fly by, it’s a reminder that life finds a way to continue, if only they’re willing to man up and fight for it. This is what they’re forced to do a few moments later, as they’re ambushed by Stonemen, those leprous creatures who have been wholly subsumed by the disease known as greyscale. The two survive the battle with a new outlook on life—that there are things greater than themselves to fight for. This is especially true in Jorah’s case, for he doesn’t survive the battle unscathed, revealing a scaly patch of the rot hidden under his sleeve. The difference between a boy and a man, then, may be that the boy thinks only to live, whereas the man thinks only to die in the service of something truly good.