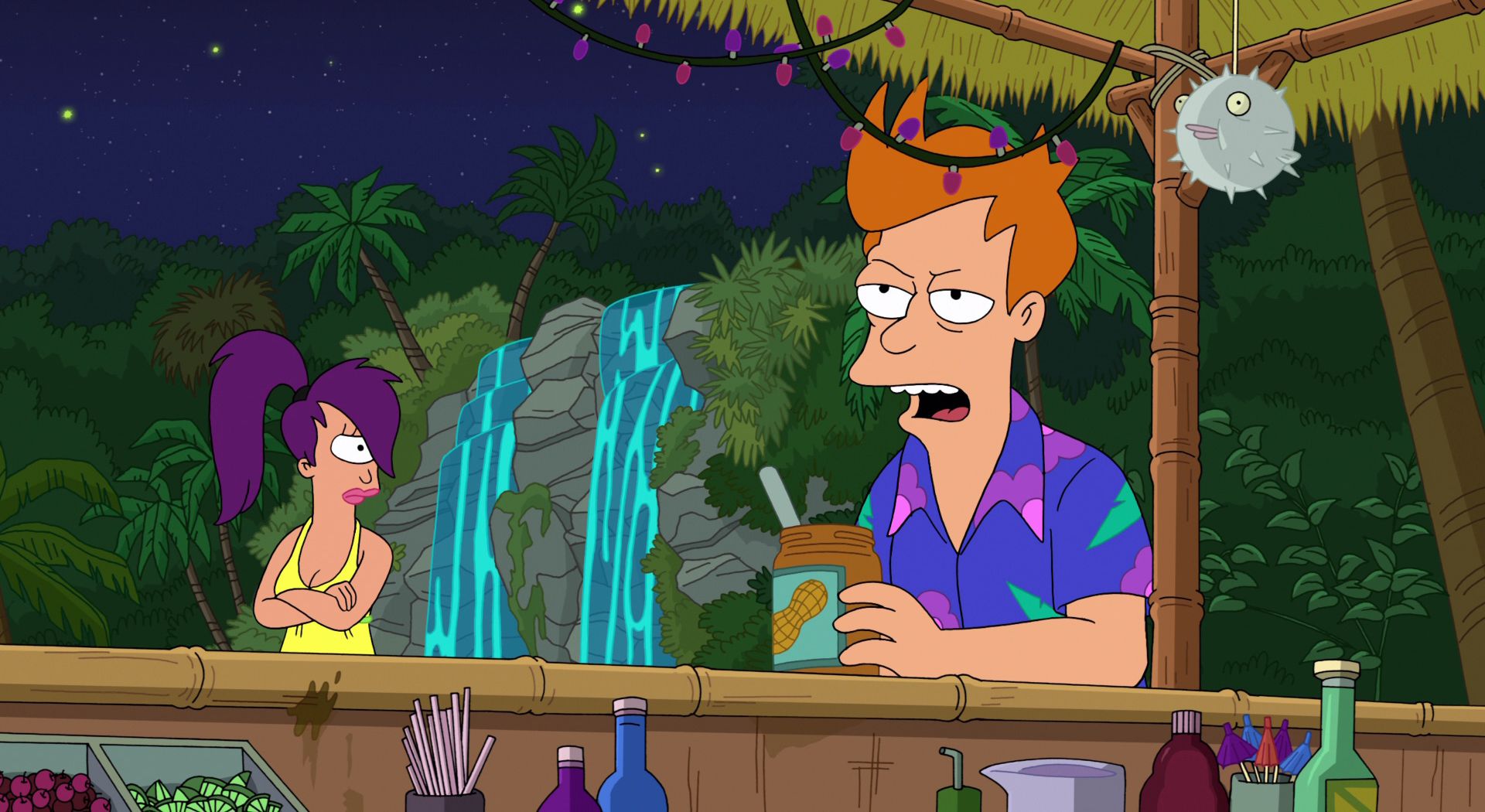 There isn’t much that represents the metaphysical heart and soul of Futurama better than the Planet Express crew’s faithful freighting ship. The ever-dependable vessel has been to hell and back, damaged and reformatted in a wealth of ways both comical and cruel, yet the lumbering lime-green spacecraft remains an iconic, trustworthy source of steadfast entertainment and excitement. The same can be said of Futurama itself, a series that rarely delivers an episode without a dozen or so memorable one-liners and an animated sci-fi-inspired set piece that makes a strong case for there still being considerable value in American-made cartoons. The Planet Express ship is at the center of “2-D Blacktop,” the first episode of the second half the show’s seventh, and presumably final final, season. It’s an outing that embodies everything that makes Futurama a stone-cold classic: eccentric yet oddly sympathetic characters, scores of clever pop-culture homages, and a unique visual aesthetic that isn’t afraid to experiment with a variety of styles both vintage and modern.

Professor Farnsworth’s (Billy West) latest modifications to the Planet Express transport, or “Bessy” as he affectionately likes to refer to her, quickly go awry, landing the ship in the junkyard and causing his employees to once again doubt his technical savvy. Without a reliable way to make their deliveries, Leela (Katey Sagal) decides to procure the 31st-century equivalent of a soccer mom’s carpool-ready SUV: a clunky, windowless hovering box with an overly padded interior and ultra-sensitive motion detectors, a sacrifice of speed and sexiness in favor of safety. Meanwhile, Farnsworth salvages ol’ Bessy from the scrapheap, saving her from being melted down (but not before we see both Speed Buggy and Speed Racer’s Mach 5 fall victim to laughably violent liquefaction), and refits the aging barge as a lean, mean, space-racing machine. The episode’s ultimate spectacle is as sublime as Futurama gets, a rousing mad dash that, by design, trumps the entirety of Fast & Furious 6. Leela’s mom-van faces off against the Professor’s souped-up Planet Express hot rod in a showdown on a massive möbius strip, the two vehicles eventually colliding post-Dimensional Drift, sending Leela, Farnsworth, finish-line flag-waving Fry (also voiced by West), and stowaway Bender (John DiMaggio) into a 2D microcosm that’s a hyper-surreal fusion of Flatland and Paper Mario.

The second episode, “Fry and Leela’s Big Fling,” slows things down, but only in the high-octane action department. The writers bring to the table epigrammatic jabs at the depravity of targeted advertising, animals in captivity, and reality television. Beginning with Fry and Leela’s hilariously fruitless attempts to get some alone time (Bender, apparently working his after-hours gig, tries to rob them at a park) and climaxing with a never-could’ve-seen-that-coming twist that evokes The Truman Show without being the slightest bit cliché, the episode remains a remarkable balancing act throughout. Even as it summons a multitude of farfetched scenarios, obscure references, and rapid-fire jokes, it still manages to effectively reinforce the emotional cornerstone of Futurama’s offbeat universe: Fry and Leela’s rollercoaster courtship. In the short span that we see the enraged orangutan Dr. Banjo (David Herman) shooting tranquilizer darts at a marmoset pajamas-wearing Amy (Lauren Tom), we also witness (mostly off-screen, of course) Fry and Leela, for perhaps the very first time, consummating their love in a refreshingly non-satirical manner. It’s a scene that strangely mirrors the pair’s embracing, severed limbs floating among the stars in “A Farewell to Arms.” It’s moments like this that, as the curtain presumably closes on Futurama after these final 13 episodes go to air, will stay encapsulated in the memory banks of allegiant viewers, frozen in time for a thousand years like a certain clumsy pizza delivery boy.