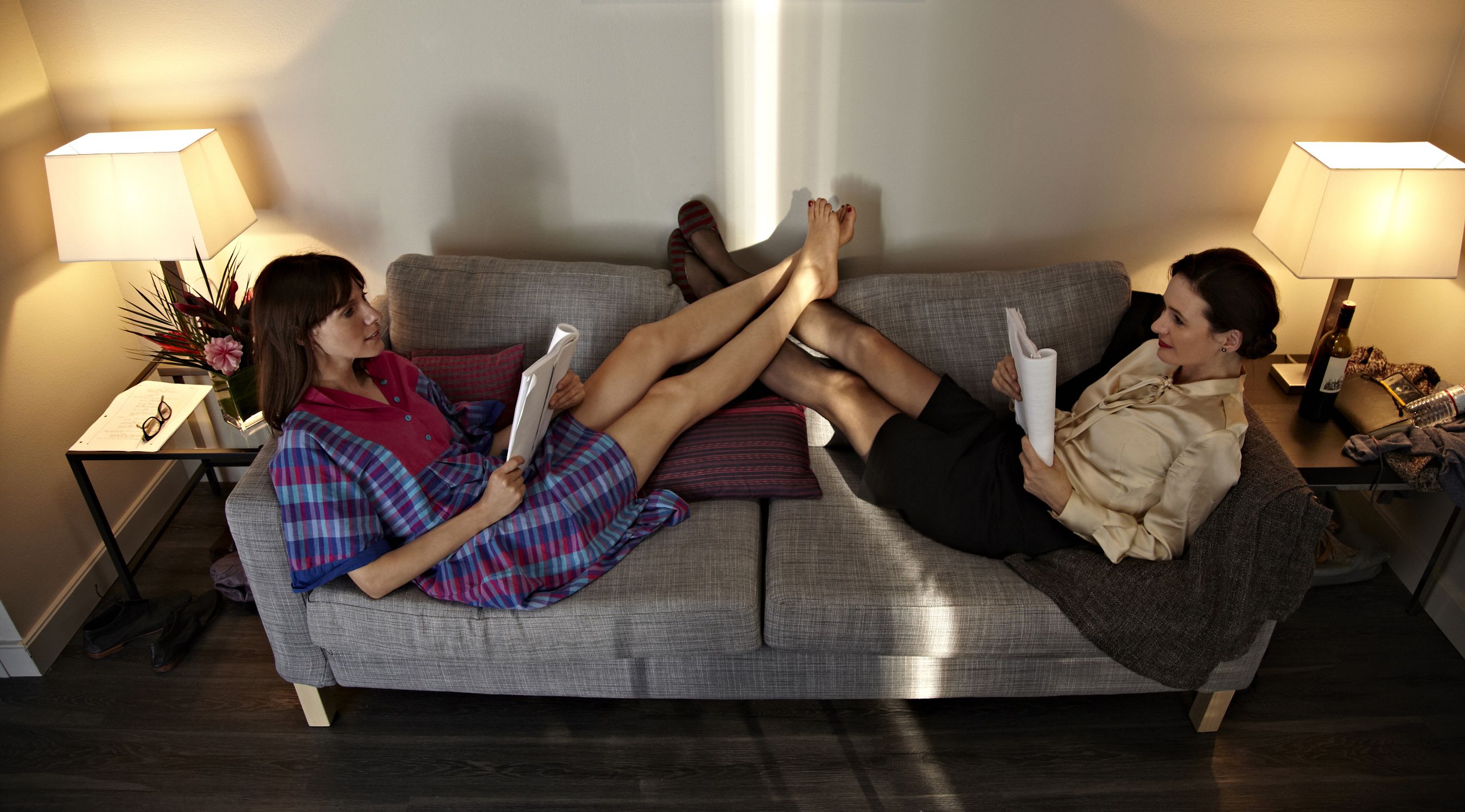 Supporting turns on shows like the BBC’s Peep Show have been the meat of Dolly Wells’s estimable career, but she’s never been what you might call “a name,” unlike Emily Mortimer, her real-life best friend since childhood. The chasm that exists between being a working actress and being a household name is central to the drama of Doll & Em, the six-part comedy of discomfort that the two actresses have created in collaboration with writer-director Azazel Jacobs. But it’s certainly not a limiter on the grand comic contemplations about fame, age, and creativity that the triptych deftly juggles here.

As one might assume from the title, Wells and Mortimer play fictionalized versions of themselves, a creative decision that echoes Jacobs’s choice to have his own parents essentially play themselves in Momma’s Man. Following a devastating breakup, Dolly takes up her friend’s offer to fly out to Los Angeles and work as her assistant, which is to say she’s paid to serve and manage Emily’s day-to-day life, an incongruous way of being for a true friend. It’s a role that Dolly is uniquely unqualified for, and many of the show’s extended bouts of flagrant self-involvement emerge from Dolly breaking from the character Emily creates for her. The longer Dolly stays in L.A., looking after Emily during the production of her latest film (”The Godfather with women”), the more she defers to a natural, mostly respectful competitiveness that characterizes her long friendship with Emily.

The penny drops when, while filming a funeral scene in which Dolly is asked to serve as an extra, Emily’s director, Mike (Aaron Himelsetein), pushes past his star, who’s incapable of crying on cue, to focus on her balling bestie, whose father has recently passed away. The element of motivation and inspiration in performance is something Jacobs and his leads consistently circle back to, and Emily’s quiet sadness is that she really has nothing to draw on for her performance. And yet, the series’s creators are careful to show how mercilessly fame corrupts and makes a fool out of seemingly level-headed Dolly as much as it’s zapped Emily of any thrill she gets from her craft.

Following her big scene, Dolly gets chummy with John Cusack while also managing a fling with Emily’s producer (Jonathan Cake) and feeling out a deal with her agent (Vicki Lewis). Cusack is funny and charming, but the best cameo goes to Susan Sarandon, who forces Dolly to apologize to her son after a game that involves jumping over imaginary sharks spurns an emotional breakdown. The Holly-weird ribbing is direct but never mean-spirited, and the show’s view of performance as a high that feeds off of emotional volatility, stress, and uncertainty, and subsequently turns into an all-consuming addiction, is wiser and more curious when it comes to the impulse of performance than the last three-dozen or so burn-Hollywood-burn “satires.”

Doll & Em turns out to be unerringly fair-minded in its view of popular filmmaking, if only because concerns about Hollywood’s shallowness are secondary to ideas of age and, inevitably, death. Dolly’s recent experience with her father’s death is what enables her to cry, to express without pretense, while Emily, a happily married mother of two and a celebrated character actress, can only find in herself to bemoan the closing of a childhood bookshop she hasn’t gone to in years. When Emily and her family visit England, the actress is seen as an outsider, an expatriate window-shopping for what first drove her to do what she now does without even thinking, or maybe even feeling. At one crucial moment, Emily is put into age make-up, which she continuously remarks makes her look 80 while the character she’s playing is only in her 60s. The creators throw shade at Hollywood’s fear of age, but it’s one they recognize as universal, and not entirely without its special sort of utility. After all, comfort kills ambition in Doll & Em, and the very pulse of life seems to go with it.