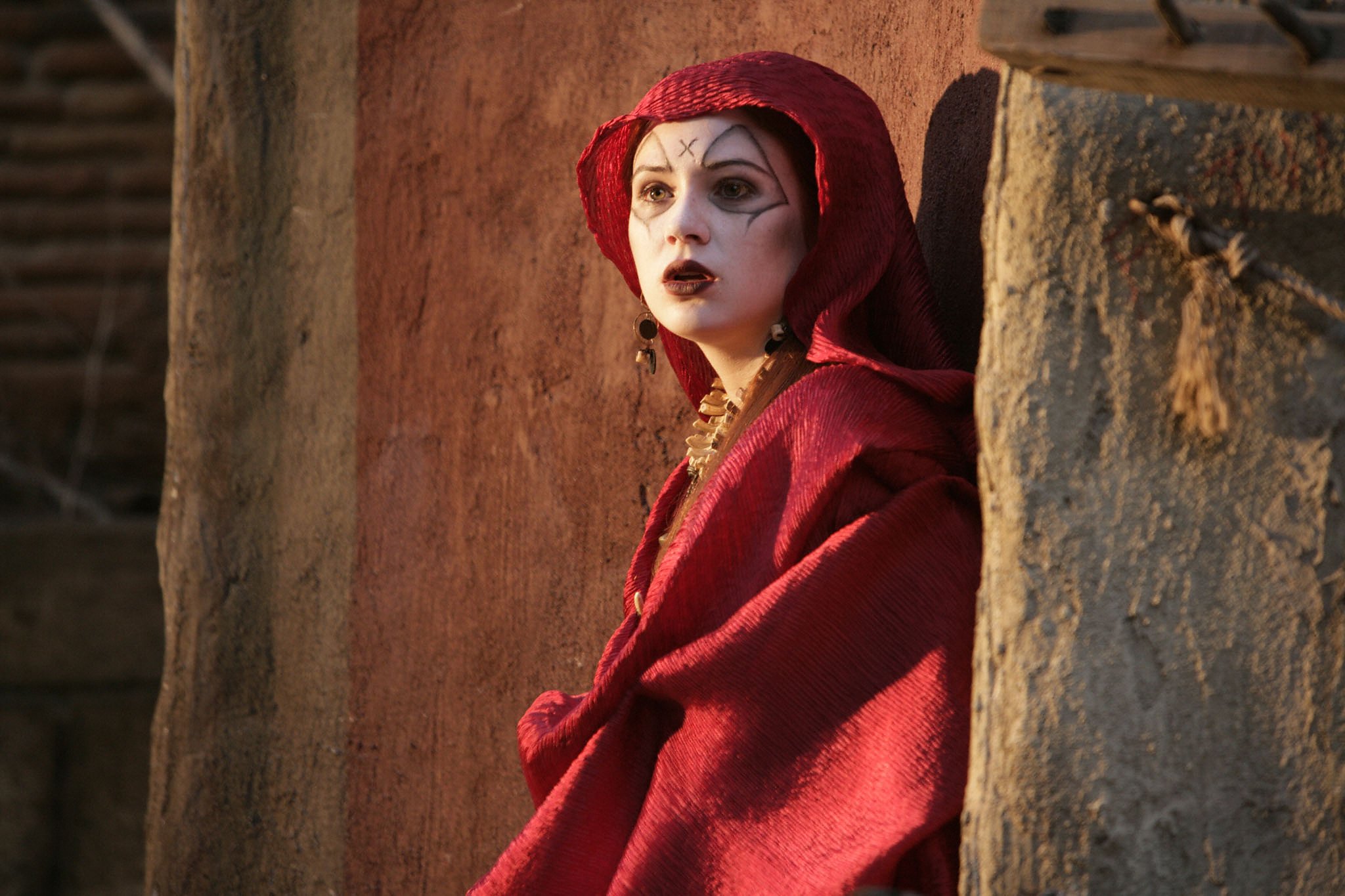 “The Fires of Pompeii” tinkers with a spot in the season where similar installments have been little more than clever dives into pseudohistory. Don’t get me wrong, “Fires” is by no means an accurate account of what went down when Mount Vesuvius erupted, but since the populace of Pompeii went along for the tragic ride, the episode manages to cover its ass. It features no historic figure (i.e. Dickens, Queen Victoria or Shakespeare); instead, the event itself is the figure. It also hints at events to come, further develops the new Doctor/companion relationship, and features effects work that’s outta this world.

The Doctor attempts to take Donna to ancient Rome, only they arrive slightly off course in Pompeii—the day before Mount Vesuvius erupts. Clearly it’d be best to return to the TARDIS… only the TARDIS is gone. A street vendor informs the time travelers that he’s sold it to Caecillius (Peter Capaldi), a marble sculptor and collector of “modern art”—which a Police Box manages to fall under. Caecillius’ family is a loveable, sitcomish clan, and the affair begins dancing with “A Funny Thing Happened on the Way to the Forum.” Dad, mom, son and daughter interact with each other as any modern TV family might and it all seems like good fun. Well, except for the daughter, Evelina (Francesca Fowler)—who’s primed for induction into a nutty cult of soothsayers called the Sybilline Sisterhood (reminiscent of the Sisterhood of Karn from the classic Who story “The Brain of Morbius.”) She’s seeing things many don’t, and mother approves of her technique. (Lucky gal—growing up in my house, a mere Ouija Board was cause for alarm.)

Before even finding the TARDIS, Donna asserts that something must be done about this volcano business. Maybe it can’t be stopped, but surely the locals can be warned? The Doctor objects. This is all part of established history and they can’t interfere. Donna objects in return and isn’t giving up so easily. What balls! The 40-year old human balks at the wisdom of the 900-year old Time Lord! The Doctor and Donna make fast friends with Caecillius and his family (introducing themselves as Mr. and Mrs. Spartacus), but Evelina immediately sees through their ruse and calls them by name, as does Lucius (Phil Davis), another sayer of sooths, who has commissioned a particularly strange sculpture from Caecillius. The following exchange seems to be full of signs and portents for the rest of the season:

Evelina: “Doctor, that’s your name.”
The Doctor: “How did you know that?”
Evelina: “And you, you call yourself Noble.”
Lucius: “The female soothsayer is inclined to invent all sorts of vagaries.”
The Doctor: “Oh, not this time… Lucius, I reckon you’ve been out soothsayed!”
Lucius: “Is that so… man from Gallifrey.”
The Doctor: “What?”
Lucius: “Strangest of images, where home is lost in fire, is it not?”
Donna: “Doctor, what are they doing?”
Lucius: “And you, daughter of… London.”
Donna: “How does he know that?”
Lucius: “It is the gift of Pompeii. Every single oracle tells the truth.”
Donna: “That’s impossible.”
Lucius: “Doctor, she is returning.”
The Doctor: “Who is? Who’s she?”
Lucius: “And you, daughter of London—there is something on your back!”
Donna: “What’s that mean?”
Evelina: “Even the word Doctor is false. Your real name is hidden. It burns in the stars—in the Cascade of Medusa herself. You are a lord, Sir… a Lord of Time.”

The only future event neither soothsayer seems to have any insight into is tomorrow’s mayhem. Donna later rectifies this by telling Evelina about the eruption, which the girl rejects as false prophecy—and it doesn’t set well with the eavesdropping Sisterhood either. Their High Priestess orders Donna to be sacrificed. Meanwhile, the Doctor pokes around Lucius’ growing collection of marbled carvings, which when all placed together form an energy converter—but what for? And why has Lucius’ arm turned to stone? The episode really kicks into high gear at this point, when a creature made of stone and lava appears (which is easily taken care of by a bucket of water) and Donna is kidnapped by the Sisterhood.

The Doctor quickly rescues her before the sacrifice and just as quickly discovers the High Priestess has all but completely turned into stone (as have the others in the Sisterhood and Evelina). A presence speaks through the Priestess and reveals itself to be an alien known as a Pyrovile. The Doctor amusingly threatens the creature with a water pistol and it tells of its plan to reconstitute itself through the Pompeii populace. The time travelers head directly into the heart of the mountain where the Pyrovile, speaking through Lucius, tells the Doctor that its home world was taken—much like the Adipose last week, and surely a major plot point of Season Four’s overall story at this point. (Who would have the power to steal whole planets?) The Doctor realizes that if the Pyrovile’s energy converter continues to run, Vesuvius will not explode, and is therefore faced with a dilemma: Either the people of Pompeii die at the hand of the mountain or the Pyrovile will take over the Earth, and it’s got to be one or the other, but he also now knows that it is he who is, and always was, responsible for the end of Pompeii.

The Doctor: “Some things are fixed, some things are in a flux, and Pompeii is fixed. That’s how I see the universe. All the time every waking second: what is, what was, what could be, what must not. That’s the burden of a Time Lord, Donna.”

And so the Doctor makes the only choice he can and all hell breaks loose in what is surely one of the most spectacular sequences ever shown on Doctor Who. The explosion of the mountain and the subsequent destruction of the city is breathtakingly horrific. The Doctor and Donna return to the TARDIS where a shaking, crying Donna begs that he save even just one person, and so he does. The TARDIS rematerializes in the Caecillius home, and the four people get a reprieve from historical tragedy.

“The Fires of Pompeii” is spectacular Doctor Who that hits just about every mark it aims for (the running gag about language didn’t do much for me, but that’s a minor quibble in the grand scheme). The acting is top notch, the direction solid, the script slick and the dialogue priceless. Tennant in particular is given loads of great wordplay to mess around with here, and his performance just gets better by the season. Donna’s place in the series is cemented, and it’s really nice to see what can be done with the companion role when the figure is so assertive with the Doctor. The Pyrovile creatures in the third act are incredible looking, as are the previously mentioned scenes of destruction. The fourth season is off to a great start and if this is any indication of what to expect from the rest of the season, then it’s going to be one helluva thirteen-episode ride.

Next Week: A visit to an alien world, bonus Tim McInnerny, and the return of one of the new series’s most memorable creatures in the oh-so appropriately titled, “Planet of the Ood.”

Classic Who DVD Recommendation of the Week: Check out what happened the first time one of the Doctor’s companions attempted to meddle with history in “The Aztecs,” starring William Hartnell.