“The Stolen Earth” is a wonderful and sometimes frustrating episode. Wonderful because it skillfully brings together not only all three of the series in the Russell T Davies Whoniverse, but also numerous other elements from his four seasons of Doctor Who. It also truly kicks off the big finish of Season Four and ends with a big ol’ insane cliffhanger. It’s maybe frustrating for all the same reasons, but that doesn’t mean it isn’t a hell of a lot of fun.

The story begins immediately where “Turn Left” ended. The TARDIS materializes on Earth and the Doctor (David Tennant) and Donna (Catherine Tate) are expecting disaster. But instead, all is perfectly calm; indeed, it’s a Saturday. Regardless, the Doctor remains unnerved by Donna’s meeting Rose, which indicates to him that if she can travel from one parallel world to another, then the walls of the universe are breaking down. (If only he’d seen her earlier in the season!) They head back to the TARDIS and no sooner do the doors close then strange things begin happening on the Earth. The TARDIS interior shakes and the Doctor runs to the door, swings it open and before you can say Han Solo, the planet’s gone. The TARDIS hovers in the empty space where the Earth once was.

The words “Far Across the Universe” scroll across the screen. In New York, a UNIT base is in disarray and Martha Jones (Freema Agyeman) is present. A co-worker tells her to look at the sky. In Cardiff at Torchwood, a similar scenario has occurred and Captain Jack (John Barrowman), Gwen Cooper (Eve Myles) and Ianto Jones (Gareth David-Lloyd) assess the damage. Sarah Jane Smith (Elisabeth Sladen) and Luke (Tommy Knight) are dealt the same hand in Ealing, as are Wilfred (Bernard Cribbens) and Sylvia (Jacqueline King) in Chiswick. The daylight is gone for planet Earth. It’s suddenly dark. Everyone stares up into the night seeing the same wondrous sight. Rose Tyler (Billie Piper) appears in the middle of a street, giant weapon in hand. She looks up and sees a night sky full of alien planets.

The various groups of the Doctor’s friends scurry around each trying to do their thing to figure out what the hell is going on, and why there are 26 new planets in the sky (while on TV, Richard Dawkins has quite reasonably figured out that the planet’s moved). They realize there’s a massive space station in the middle of all the planets, and of course we the viewer are really the only people who can reasonably guess who’s onboard the ship, because we know the show and we know it’s the end of the season and we know who we’ve not heard a peep from since the early part of Season Three. Unidentified spacecrafts fly towards Earth. The first person to hear the grating alien voice is Sarah Jane Smith, thanks to her supercomputer, Mr. Smith: Daleks! (Of course.) Fear spreads across her face as it does Jack’s and Martha’s. Even though they’re all apart, they all feel the same kind of “We’re fucked” sensation. They descend on the planet and begin their reign of terror and the entire scenario is reminiscent of some great fifties alien invasion flick that was never made. It’s all really glorious and exciting and even if you’ve found yourself sick of Daleks over the past few years, this has the feel of “the moment it’s all been leading up to.”

Back in the TARDIS, on the other side of the universe, the Doctor, unable to find Earth anywhere, decides to go to the Shadow Proclamation (first mentioned way back in “Rose”), a sort of galactic police force run by albino women who use the Judoon as their muscle. They exist on some kind of space station of their own that’s another bit of gorgeous CGI, all steeples and turrets perhaps built onto the remnants of some long dead moon (the inside, however, looks a lot like what I’d suspect an empty office building in Cardiff to look like). When the Doctor tells the lead albino that the Earth’s missing, she becomes snotty and tells that actually 24 planets are missing (including Clom; the Doctor amusingly wonders, “Who’d want Clom?”). Donna also suggests the missing planets Pyrovillia and Adipose III (from “The Fires of Pompeii” and “Partners in Crime” respectively), and then there’s the Lost Moon of Poosh (mentioned in “Midnight”) and the Doctor realizes that some of the planets have been removed from time as well as space. He also deduces that they all fit together in a new formation to create a massive engine of some sort. But who could do this? He says that someone tried to move the Earth before, but that was a long time ago. (This actually happened in Earth’s future in “The Dalek Invasion of Earth,” but as far as the show’s concerned it was a long time ago; that story was made in 1964.)

On Earth, the secret Project Indigo is being activated, and Martha’s going to give it a test run. Turns out it’s a teleport technology developed from leftover Sontaran gadgetry. Just before she jumps, her superior gives her something called the Osterhagen Key, which certainly sounds ominous because it’s got a European name. On the Crucible (the name of the Dalek ship), much scheming is going on between the Supreme Dalek and another mysterious figure who any old school fan will immediately recognize as Davros, the Dalek creator. There’s a third Dalek of great importance that turns out to be none other than Caan, last seen initiating emergency temporal shift in season three. He’s gone batshit crazy and his upper casing’s been melted away so that the tentacled creature inside is exposed. Davros credits him as being the savior of them all, while the Supreme Dalek calls him “the abomination.”

Caan: “He is coming. The three-fold man. He dances in the lonely places. Oh creator of us all, the Doctor is coming!”

Meanwhile the sound of a beating heart seems to be reaching out to Donna from somewhere. One of the albinos sees that something was on Donna’s back and tells her she’s sorry for her loss. Thinking she means the loss of Earth, the woman corrects her: “I mean the loss that is yet to come.” The Doctor interrupts and asks Donna if she can remember any important happenings on Earth from before her travels with him. She suggest the missing bees, which he quickly hooks into. Turns out the bees (or at least some of them) were actually aliens who went back home to their home planet sensing danger (clearly an homage to Hitchhikers Guide’s dolphins). The Doctor follows their trail to the oft-mentioned Medusa Cascade, and yet there is nothing there. Again, another gorgeous shot of the TARDIS drifting through the cascade—there’s no end to the frequent beauty of this episode. He’s helpless and says it’s the end of the line. There’s nothing more he can do, despite Donna’s protests that they can’t give up.

Everywhere on Earth the Daleks have taken over. The planet has surrendered. In the midst of it all a lone voice cries out to the Doctor’s many companions. It is Harriet Jones (Penelope Wilton), former Prime Minister (you know who she is). She has constructed something called a “sub-wave network,” which is designed to seek out anyone and everyone who can help to contact the Doctor, and she contacts Torchwood, Sarah Jane, and Martha, while Rose is left as an observer since she’s hooked up with Wilf and Sylvia who don’t have a webcam. This entire sequence is actually quite charming, what with hope coming back to life and all, and it provides some much needed humor in the midst of all the seriousness. Then basically what happens is they all work together to place a super-turbocharged phone call to the Doctor. And it works, but at a price—Harriet’s life. The Doctor is able to locate Earth, as well as the other 26 planets, which have been shifted and exist in a tiny pocket of time out of sync with the rest of universe. He communicates with all his old friends through the sub-wave network—all but Rose, who still cannot be heard or seen. In the midst of the reunions, Davros (Julian Bleach) breaks through to the Doctor.

Davros: “Your voice is different, and yet its arrogance is unchanged. Welcome to my new empire, Doctor.”

Davros reveals that it was Dalek Caan’s emergency temporal shift took him back into the time-locked time war and he saved Davros’ life, although it cost him his mind. Davros pulls back his smock to reveal a chest that’s been ripped apart through surgery. He literally gave his cells to create a new race of Daleks. The Doctor pulls a lever on the TARDIS console and materializes on Earth. On cue, Rose is waiting for him outside the TARDIS, and he runs toward her and she to him and it’s all sweetly romantic—right up until a Dalek appears out of nowhere and issues a bolt to his side. And then it looks like Sarah Jane is going to be exterminated. As are Gwen and Ianto at Torchwood. And then, just to top it all off, the Doctor begins to regenerate…

Sheesh! This is exactly the kind of episode that is a joy to watch but a bitch to recap. Events just happen with this, bam, bam, bam rapid fire sense of urgency and surely this entire piece was not as much fun to read as it was to watch the episode itself. The characters are what make this thing work, and of course the dozen or so that are utilized in this piece have been so well-defined over the past four years that there’s almost no way Davies could screw it up. On paper, you’d never think it could work, and yet it does. The science is as dodgy as you’d expect, but when TV’s this much fun, who really cares about the technobabble. Usually for me there’s a point where a I just start laughing along with all the bad science because I don’t think even Davies assumes we’re going to take it all that seriously. It’s all an excuse to put every single toy from the collection into one big sandbox and just see what happens. And what happens is exhilarating TV, although there’s every reason it should sink before it should sail. Thank goodness it doesn’t.

Next Week: Find out all about the Osterhagan Key in the 90-minute season finale, “Journey’s End.” (Make sure to set your TIVOs and DVRs accordingly!)

Classic Who DVD Recommendation of the Week: Take a gander at “Destiny of the Daleks.” Not the greatest Dalek entry ever, but it’s got Davros, and you gotta love the Movellans. Starring Tom Baker and Mrs. Richard Dawkins (and ex-Mrs. Tom Baker), Lalla Ward. 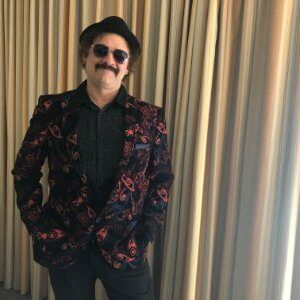 Ross Ruediger is a Doctor Who fanatic whose writing on the show has also appeared in Vulture.

Mad Men Recap: Season 2, Episode 1, “For Those Who Think Young”