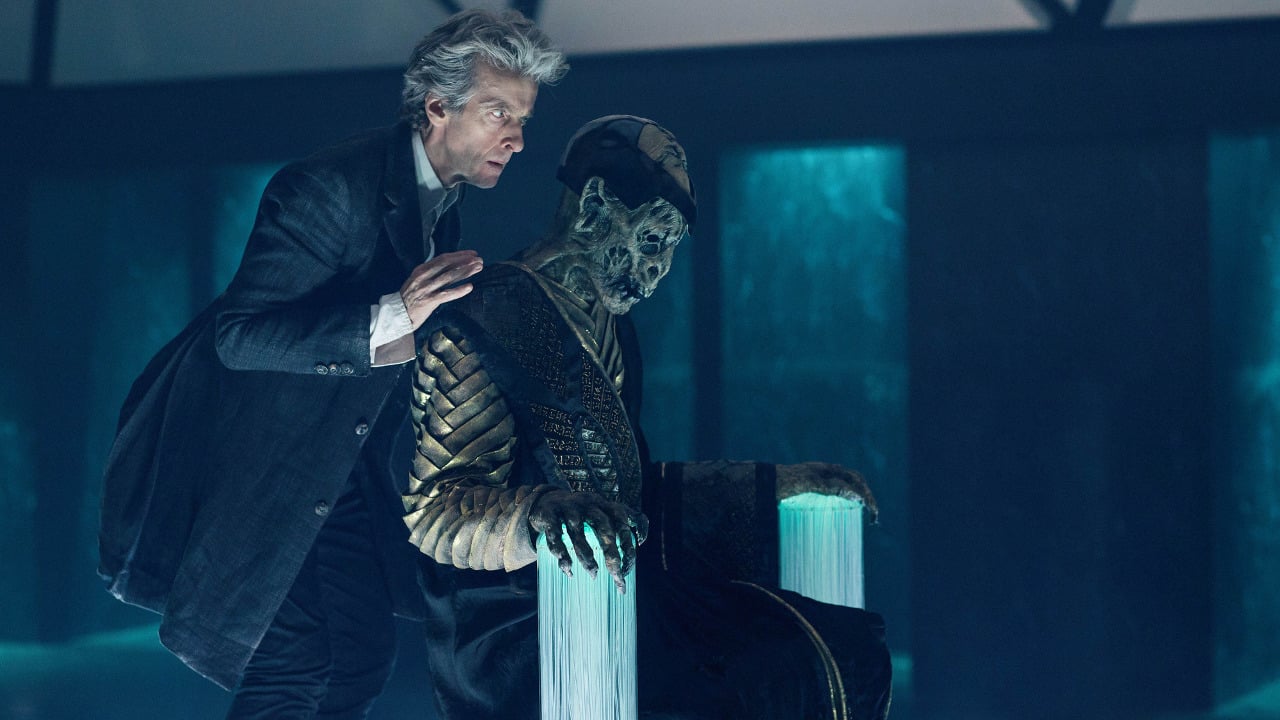 In the latest installment of Doctor Who, “The Lie of the Land,” the Doctor (Peter Capaldi), Bill (Pearl Mackie), and Nardole (Matt Lucas) finally manage to end the threat to Earth from the alien monks introduced in “Extremis.” It completes a trilogy of episodes that strongly calls to mind another Doctor Who three-part story from almost exactly a decade ago. In both stories, the second episode ends with an unstoppable alien takeover of the world, and the third opens with an unexpected jump forward in time (a full year in 2007’s “Last of the Time Lords,” a more modest six months in this case) to a point where humanity has been totally subjugated. In both, the Doctor begins the third episode in the power of the oppressors, and his companions bear the burden of leading the resistance until he can fight back. Finally, both feature the Doctor’s complex relationship with his fellow Time Lord, the Master. After being the main antagonist in the earlier story, the Master—now in the form of Missy (Michelle Gomez)—is actually now an ally (of sorts).

Unfortunately, despite throwing in the buzz phrase of the moment, “fake news,” this episode’s depiction of a populace kept in their place by the aliens’ psychic brainwashing has no more resonance with contemporary concerns than the Cold War-era geopolitics of last week’s episode did. Rather, the crowd of drably (and identically) dressed proles shuffling aimlessly through a dreary existence while living in fear of the “memory police” is straight out of Nineteen Eighty-Four (a year which, incredibly, is now almost as far in the past as it was in the future when George Orwell was writing about it). None of the characters except for the Doctor and his friends rise above the barely functional, making it hard to care about the fate of this world. The monks remain a vague and diffuse threat throughout, with none of them getting even a single line of dialogue. What tension there is in the episode springs entirely from Bill and the Doctor’s interactions—at first, her horror at his apparently willing co-operation with the monks, and later his desperation to stop her sacrificing herself to end the aliens’ presence.

Director Wayne Yip previously helmed the sixth and seventh episodes of the Doctor Who spinoff series Class (which completed its eight-episode run alongside the flagship show on BBC America this week). On the whole, Class was no better than mediocre, but Yip’s two episodes were distinctly above the level of the rest. Here, he generates excellent pace and atmosphere in the early set piece featuring Bill and Nardole sneaking aboard the prison ship that holds the Doctor, and also does well with the climactic scenes of them infiltrating the monks’ base in London (another huge stone pyramid like the one in last week’s episode, and one that’s revealed to be a disguised spaceship) and turning the aliens’ memory-altering technology against them.

Capaldi gets to show off his customary range throughout “The Lie of the Land,” and in the scenes where the Doctor pretends to have joined the monks, the actor’s almost too convincing at recreating the cold, unlikeable Doctor of his first few episodes back in 2014. Then, after the Doctor reveals that he was merely testing Bill (to make sure that she was not under the influence of the monks), the return of his bouncy, wisecracking persona reminds us just how far he’s come since those early days. The fake-out where the Doctor pretends to start regenerating comes across as gratuitous since Bill knows nothing of regeneration; it’s a moment included simply in order to provoke a frenzy of fan speculation as it was featured in trailers for the past several months.

Writer Toby Whithouse has a knack of creating memorable one-on-one confrontations between the Doctor and his adversaries (see, for example, 2006’s “School Reunion” and 2010’s “The Vampires of Venice”). In this case, the context is slightly different because Missy isn’t the immediate threat, but Capaldi and Gomez still build up a tremendous intensity as the Doctor presses Missy for information about her own encounters with the monks, and she gleefully tells him that Bill—whose decision to “consent” to the monks in the last episode apparently made her into some sort of psychic anchor for them—needs to die in order to free Earth.

The standout performer of the episode is once again Mackie, who vividly conveys Bill’s emotional journey from the isolation and paranoia of the opening scenes to her relief at being back with the Doctor and her eventual triumph as she finds the way to defeat the monks. This last scene makes great use of the Doctor’s good deed in “The Pilot” of going back in time and taking photographs of her mother for Bill to later discover. We’ve been shown repeatedly how close Bill feels to her late mother, and here we actually see an imaginary version of her in the early scenes when Bill has no one else to talk to. This device allows Bill to provide some necessary exposition in voiceover, but its real significance comes when she’s able to use the uncorrupted “memory” of her mother to disrupt the monks’ hold on her mind, and hence on the Earth. It’s a payoff ingenious enough to make one forgive how easily these super-powerful aliens end up being defeated.

In the end, the monks may be gone, but the season arc continues as we return to the vault, where the Doctor again confronts Missy. In “Extremis,” she promised to “turn good” if he saved her life, and she has a tear running down her face as she keeps remembering more people she’s killed. But whether she’s really changing as a result of the Doctor’s “therapy” remains to be seen.

Next Week: The Ice Warriors are back, in “The Empress of Mars.”

Classic Doctor Who Recommendation: The first time the Doctor and his friends found themselves in an already conquered world which they then had to free from alien oppression occurred in 1964’s “The Dalek Invasion of Earth,” starring the original TARDIS team of William Hartnell, William Russell, Jacqueline Hill, and Carole Ann Ford.