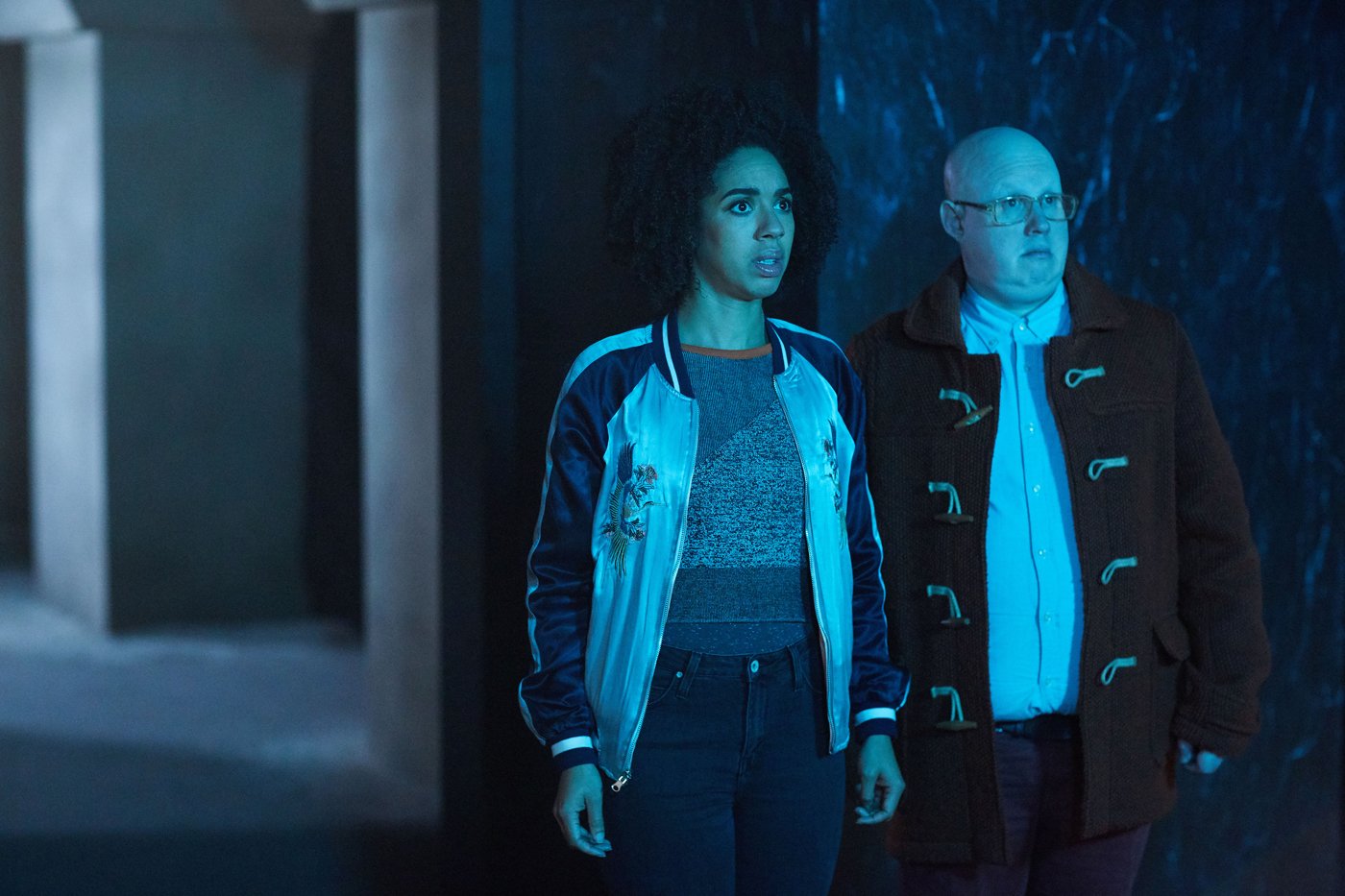 In last week’s episode of Doctor Who, “Extremis,” the Doctor (Peter Capaldi) discovered that a group of macabre, monk-like aliens had been running a simulation of all human history to gather information and find the best point at which to launch an invasion of Earth. And in tonight’s episode, “The Pyramid at the End of the World,” we learn more about the threat as the Doctor, Bill (Pearl Mackie), and Nardole (Matt Lucas), along with the UNIT military organization, encounter the creatures at their base: a giant stone pyramid, which is five thousand years old but (impossibly) has only just appeared, in the fictional Middle Eastern country of Turmezistan.

That nation previously played a role in a 2015 two-parter, consisting of “The Zygon Invasion” and “The Zygon Inversion,” that was also a collaboration between writer Peter Harness and showrunner Steven Moffat. As in the earlier story, a problem on a worldwide scale is presented only to be narrowed down—in a way that’s very typical of Moffat—so as to focus almost entirely on the regular characters. Unfortunately, having only one episode instead of two to play with this time requires Harness and Moffat to take a number of shortcuts in their plotting, to such an extent that suspension of disbelief is badly threatened. In particular (and unlike the Zygon story, which believably touched on contemporary issues of terrorism and asylum seekers), the political situation depicted here seems totally disconnected from today’s world. The idea of American, Russian, and Chinese armies directly confronting each other in a fight over territory belongs, rather, to the Cold War era (in fact, the clash of the super powers was a background factor in several stories of the classic Doctor Who series in the 1970s and 1980s).

All considerations about chains of command are brushed aside by the writers as the three middle-ranking officers who the Doctor encounters are treated as if they have full authority over their whole armies, taking it upon themselves to negotiate with the aliens on behalf of their respective nations. The scene where they shake hands and decide to “give peace a chance” is embarrassingly simplistic; it’s only tolerable because, as the Doctor realizes, this whole subplot is just a distraction anyway. It turns out that the aliens have identified a moment where a catastrophic accident in a biochemical research laboratory will create a bacterial plague that will wipe out all life on Earth, and have precipitated the confrontation in Turmezistan to divert the Doctor’s (and UNIT’s) attention from the real danger.

Director Daniel Nettheim (who also directed the Zygon story) does his best to create a large-scale feel, and the bright sunshine and wide-open spaces in the Turmezistan scenes do indeed make a refreshing contrast with the dark interiors that dominated the previous few episodes. Amusingly, some budget limitations are apparent in the sequence where the aliens easily neutralize the forces sent against them (for example, by stopping an airplane in mid-air and gently setting it down on the ground). When a Russian submarine launches a missile against the pyramid, we only see the Doctor and his friends reacting to the aliens’ off-screen response, before cutting to a shot of the submarine vertically embedded in the ground.

Nevertheless, some of Nettheim’s touches are nicely subtle. There’s an early shot from the point of view of the closed-circuit TV cameras in the laboratory, showing technician Erica (Rachel Denning) busily working; her sleep-deprived colleague, Douglas (Tony Gardner), is responsible for the accident threatening the world. Spookily, one of the monks fades into the shot, apparently watching her; then the whole image quickly dissolves in a transition back to the outside of the pyramid. What looks like a mere directorial flourish turns out to foreshadow the plot’s most clever moment: of the Doctor quickly identifying the critical laboratory by shutting down all surveillance cameras and seeing which ones the aliens turn back on.

The Doctor begins the episode quietly playing his guitar, meditating on the predestination that’s implicit in the aliens’ ability to precisely simulate history and predict the future. His mood changes as he gets caught up in the fun of being president of Earth again (an idea introduced in 2014’s “Death in Heaven” and revisited in the Zygon story), and establishes a breezy rapport with Erica. But ultimately, thanks to another plot contrivance, he finds himself facing death because of the blindness he incurred in “Oxygen” and has been keeping secret from Bill. He rigs up an explosion to sterilize the contaminated laboratory but can’t get out of it without being able to see to operate the combination lock on the door—and his confession of his blindness to Bill gives the monks the chance they have been waiting for.

Even by the end of the episode, the aliens remain inscrutable. They offer to save the planet from the oncoming disaster, but it seems they cannot do anything unless those with “power” willingly invite them to. (Genre-savvy Bill immediately makes the obvious comparison to vampires, but the Doctor says no, as these creatures are something else.) They require this consent to be given out of “love”; “Only then can the link be formed,” they tell Bill, cryptically. The U.N. Secretary General consents out of fear and the three army officers out of strategy (intending to surrender now in order to fight back later), but they’re all destroyed. Finally, Bill offers to consent if the aliens will restore the Doctor’s sight, and they agree. It feels like the writers are groping for some sort of thematic point about true love being an unconditional surrender, an emotional blank check, but it feels forced—not least because it’s totally unclear why Bill’s decision should affect the entire world.

It also doesn’t really make sense that the monks declare that she’s acting out of love, as the relationship between the Doctor and Bill, at least up to this point in the show’s 10th season, has clearly been one between a teacher and his pupil. Have the monks been watching a different show than we have? As the episode ends with the Doctor’s sight restored at an unknown cost, we’re once again left with the impression (as with the end of “Extremis”) that the real story has only just begun. Hopefully, the third episode will provide the tale with a satisfying ending after this rather unimpressive middle chapter.

Next Week: The story concludes, in “The Lie of the Land.”

Classic Doctor Who Recommendation: The three-sided military standoff in this episode is very reminiscent of the geopolitical situation in 1972’s “Day of the Daleks,” starring Jon Pertwee and Katy Manning, with Nicholas Courtney as the Doctor’s military friend Brigadier Lethbridge-Stewart.