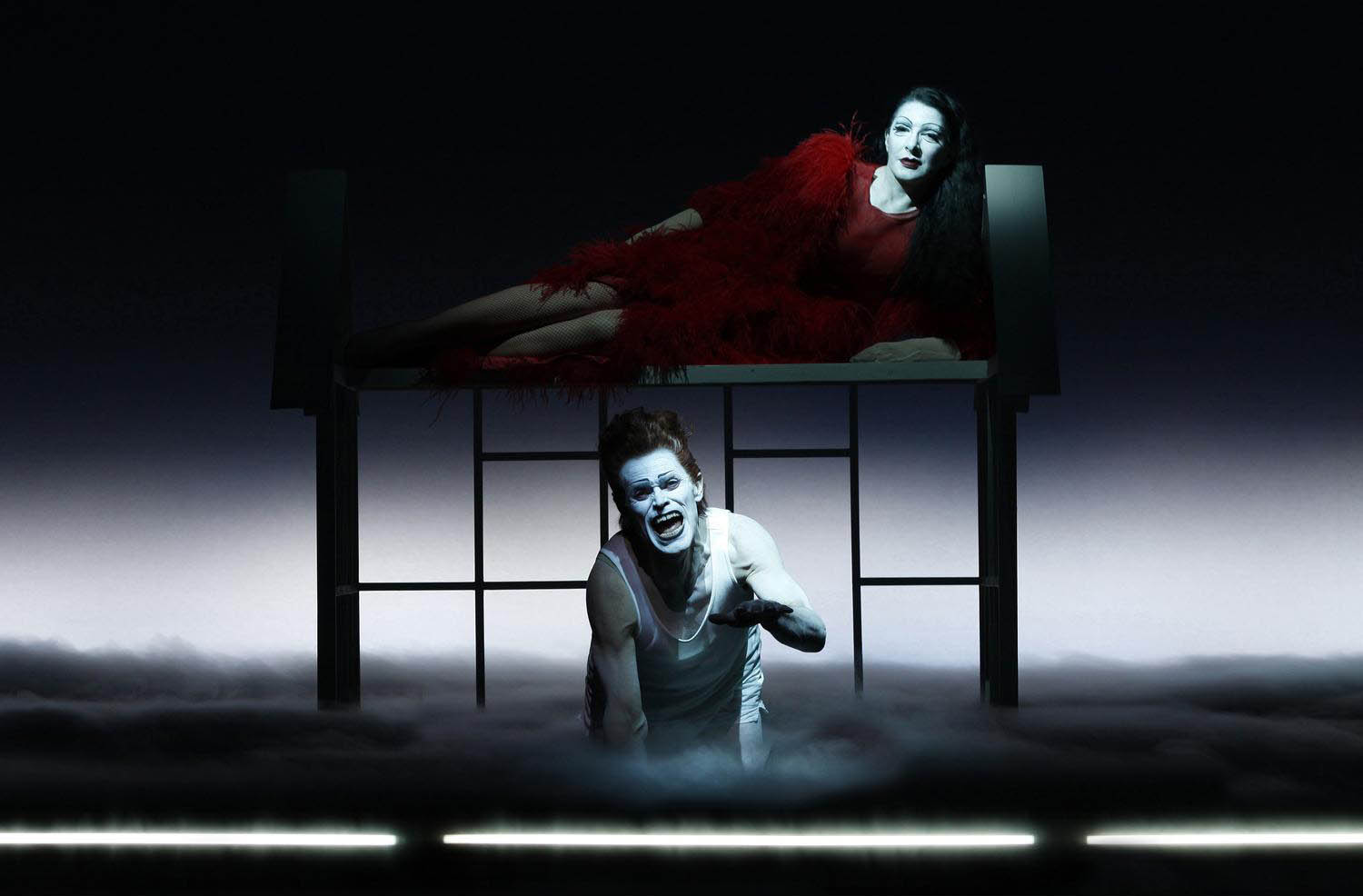 The Museum of Modern Art’s 2010 exhibition of performance artist Marina Abramović’s life work, five years after the Guggenheim allowed her to “re-perform” seven performances by herself and others, cemented Abramović’s conversion into performance art’s ruling figure, at once parent to the form and gatekeeper of its history, at least in the public imagination. Those who’ve accused her of crossing the thin line from self-sacrificing hero to self-aggrandizing celebrity will likely be further displeased by The Life and Death of Marina Abramović, an impressionistic theatrical biography co-authored and co-starring Abramović, and designed and directed by Robert Wilson. Here we see Abramović as a living saint, already transubstantiated.

The evening is framed as a funeral for Abramović (newspapers are distributed to the audience with the headline, “ARTIST MARINA ABRAMOVIĆ DIES AT 67”), who begins by lying in a white robe on a coffin-shaped table and ends drifting into the air in the same gown. She’s flanked by two women, and in the finale a triptych of black crows peppers the sky. The two-and-a-half-hour work might have been called The Passion of Marina.

Wilson’s aesthetic—always glacially paced, hugely scaled, and so beautiful it electroshocks the eyeballs—is at home in the colossal Park Avenue Armory, though in accommodating Wilson’s proscenium stage the Armory is forced to hide its normally elastic interior. To structure the work, Wilson organizes a series of biographic anecdotes provided by Abramović, mostly about her childhood, but moving forward through the present day, into a sequence of 11 scenes and five “kneeplays,” similar to his more famous collage works like Einstein on the Beach. But unlike Wilson’s production of Philip Glass’s opera, and other early pieces like The Life and Times of Joseph Stalin and The Life and Times of Sigmund Freud, where the relation between the on-stage action and the titular figures are never explicit, The Life and Death of Marina Abramović is enslaved by its subject’s life story.

Wilson recently staged another artistic biography, Zinnias, about the (actually) late Clementine Hunter. There he invented a new theatrical world to accommodate his subject, representing Louisiana plantation life in all its vibrancy and frustration with remarkable fullness. Surprisingly given its greater public interest, The Life and Death of Marina Abramović shows much less originality. Wilson fills it with stock images from his canon, but whereas in works like The Life and Times of Sigmund Freud they elicited an imaginative release from their spectators, here they crash land into literalism.

What’s further disappointing is the elementary psychologizing with which the script connects Abramović’s life and work. Brutalized into codependency by a militaristic mother, Abramović, we’re led to believe, has spent her life trying to liberate herself from that violence while ultimately repeating it as a traumatic neurosis (speaking of Freud!). The obsession with the artist’s masochism, at the expense of her work’s other impulses (feminism, somatophobia, precarity, personal transcendence, pacifism), limits her accomplishments while obscuring what might be genuinely interesting about her personal history.

It’s only in the hands of Antony Hegarty, of Antony and the Johnsons, that The Life and Death of Marina Abramović manages real introspection. In a series of songs written expressly for the piece (“Cut the World,” “Watch Me,” “The Cut”), the singer-songwriter expresses a terrible self-doubt and a hint of melancholy about the life Marina has built for herself.

Antony and his fellow lead performers Willem Dafoe and Abramović all breathe vitality into Wilson’s strict physicality along with an exemplary cast, which highlights the proximity between Abramović’s durational performance and Wilson’s exercises of aesthetic endurance. While Antony is stately and imperious, Dafoe plays an impish Cabaret-style MC. His face painted white like a wicked clown, he spends most of the production downstage reading aloud the details of Abramović’s life in alternately mocking and militaristic tones. It’s been years since Dafoe’s avant-garde virtuosity has so served his role, and he embraces it with the gusto of a much younger performer. Unsurprisingly given that she pushes her body’s limits for a living, Abramović is a natural at Wilson’s choreography, and she takes an obvious delight in playing her wicked mother. Her nagging figure may be one of the few instances of mimesis in her entire career, and it’s enough to show she has nothing to prove on that score.

The most refreshing scene in The Life and Death of Marina Abramović, though, takes place early in the second act, as Marina sits across from Dafoe to recount the details of her love affair with fellow performance artist and collaborator Ulay. She describes their relationship in grand mythological terms (“We talked together in our dreams”), while he mocks her tragic seriousness like a mildly scandalized housewife. “Well that seems a bit much!” he says after learning that the pair traversed the Great Wall of China to mark their divorce. “Wouldn’t a phone call have done?” This moment of playful self-ironizing, in which not only Abramović, but the whole production calls its assumptions into question, stands shamefully alone in the piece.

The Life and Death of Abramović runs at Park Avenue Armory until December 21.