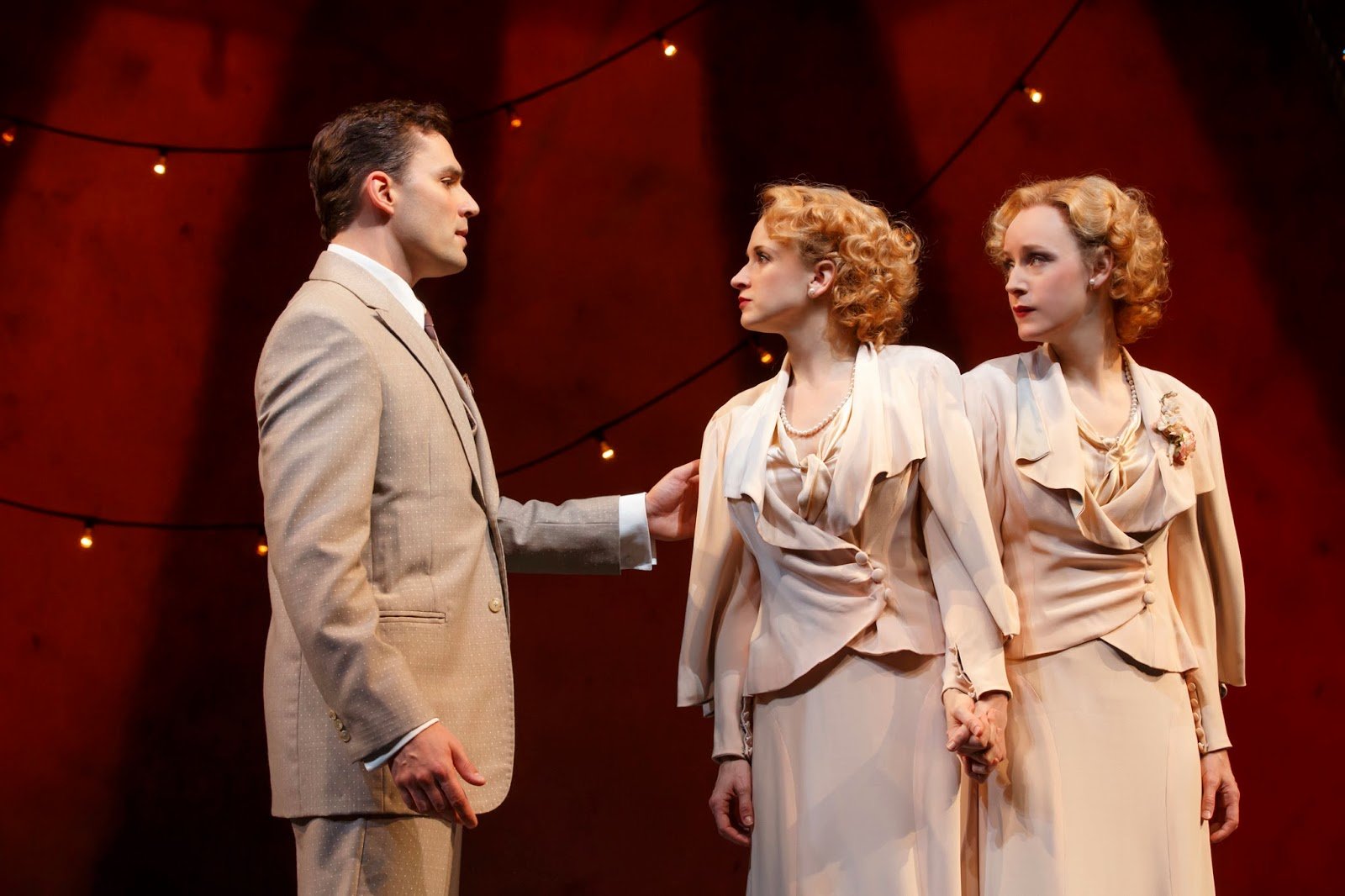 The historical link between vaudeville and the American musical—the only difference, really, is that the latter tells a single story—has been exploited in more than a few musicals, perhaps most successfully in Chicago and Gypsy. But nowhere is that connection more uncomfortably deployed than in Side Show, the story of conjoined twins, Daisy and Violet Hilton, which premiered on Broadway in 1997 with music by Henry Krieger and book/lyrics by Bill Russell. Revived now under the direction of Bill Condon with a reworked book, the show is even darker than its original production, and though full of some remarkably tender moments and peerless performances from its leading ladies, it’s still more well-intentioned than compelling.

The Hilton sisters were conjoined twins who were forced by their legal guardians to dance and play music in the 1920s sideshow circuit, which made money off the visual exploitation of “freaks” like the Hiltons. When they finally struck out on their own in the 1930s, they became a vaudeville sensation as “The Hilton Sisters’ Revue,” though they never escaped the stigma that at once limited their opportunities and kept them in the spotlight.

Side Show tells a version of their story, which, as this musical proves, is hard to make anything more than grim. Here, ambitious producer Terry Connor (Ryan Silverman) and his music director sidekick, Buddy Foster (Matthew Hydzik), free the girls from their “freak show,” make them vaudeville stars, and in true musical-theater fashion, fall in love with them. Both men lack the courage to follow through on their desires, though, leaving the girls as dejected as they began, only with the irony of fame and fortune to add to their wounds.

The problem with Side Show is that not only does the plot beat up on two undeserving girls, but every major event in the musical is driven by Terry and Buddy, the former narcissistic and unlikeable, the latter sweet-hearted but toothless. Meanwhile, Daisy (Emily Padgett) and the less strong-willed Violet (Erin Davie) are mostly left to suffer and sing. The few instances when the Hiltons are given agency—deciding to leave their freak show, parrying ignorant comments from onlookers, and one desperate attempt by Daisy to take matters into her own hands before the musical ends—are the show’s most invigorating moments, and they’re too few. It’s hard not to feel that Side Show, while trying to humanize two women who were unfairly treated in their lifetimes, manages to wring yet one more spectacle out of their pain.

Every element in Condon’s production, from David Rockwell’s imposing gray sets to Jules Fisher and Peggy Eisenhauer’s shadow-filled lights, is designed to darken the show’s mood. The revised script condenses the love plot, making room for an expanded flashback sequence about the sisters’ harsh upbringing. Presenting the torture that is the Hiltons’ lives reminds us that sideshow culture was no laughing matter, but it inadvertently draws out the tempered melodrama beneath the musical’s plot. That Condon, a film director making his theatrical debut, uses every opportunity to black out the set and put his singers in spotlights only increases the sense that this polished production slightly overplays its hand.

Where Side Show shines most brightly is in Padgett and Davie’s performances. Whenever the stage is given over to them, an emotional clarity emerges that masks any surrounding weaknesses. Their costumes connected by a safety pin, the actresses seem to read each others’ minds, exchanging glances that communicate the years the twins have shared together, even as they make each twin an individual. Davie’s emotionally raw performance particularly shatters, and her facial expressions drive the soaring first and second-act finales.

Of the rest of the cast, Hydzik offers a tender Buddy, all shyness and dewy eyes. Silverman, on the other hand, is a beautiful singer, but doesn’t work hard enough to give Terry depth, playing to the wings and unwisely trusting the script to exude a charm and sensitivity they deny the character. As Jake, the sisters’ protector and friend, David St. Louis mostly stews and flexes his muscles, deploying a bass belt that rocks the walls, but can’t offer gentleness when called upon.

Because of its classic ugly-duckling storyline, and Krieger’s often heart-pounding score, Side Show has been a regional favorite despite the commercial failure of its original Broadway run. It certainly merits this second chance, and the revised script improves the pacing of the original while continuing to make star turns of its leads. Padgett and Davie are worth the time spent in the theater, but the story they’re asked to tell is a bit too flat, too singularly dour, to live up to the show’s fighting spirit.

Side Show is now running at the St. James Theatre.

Lypsinka Speaks: Interview with a Surrealist