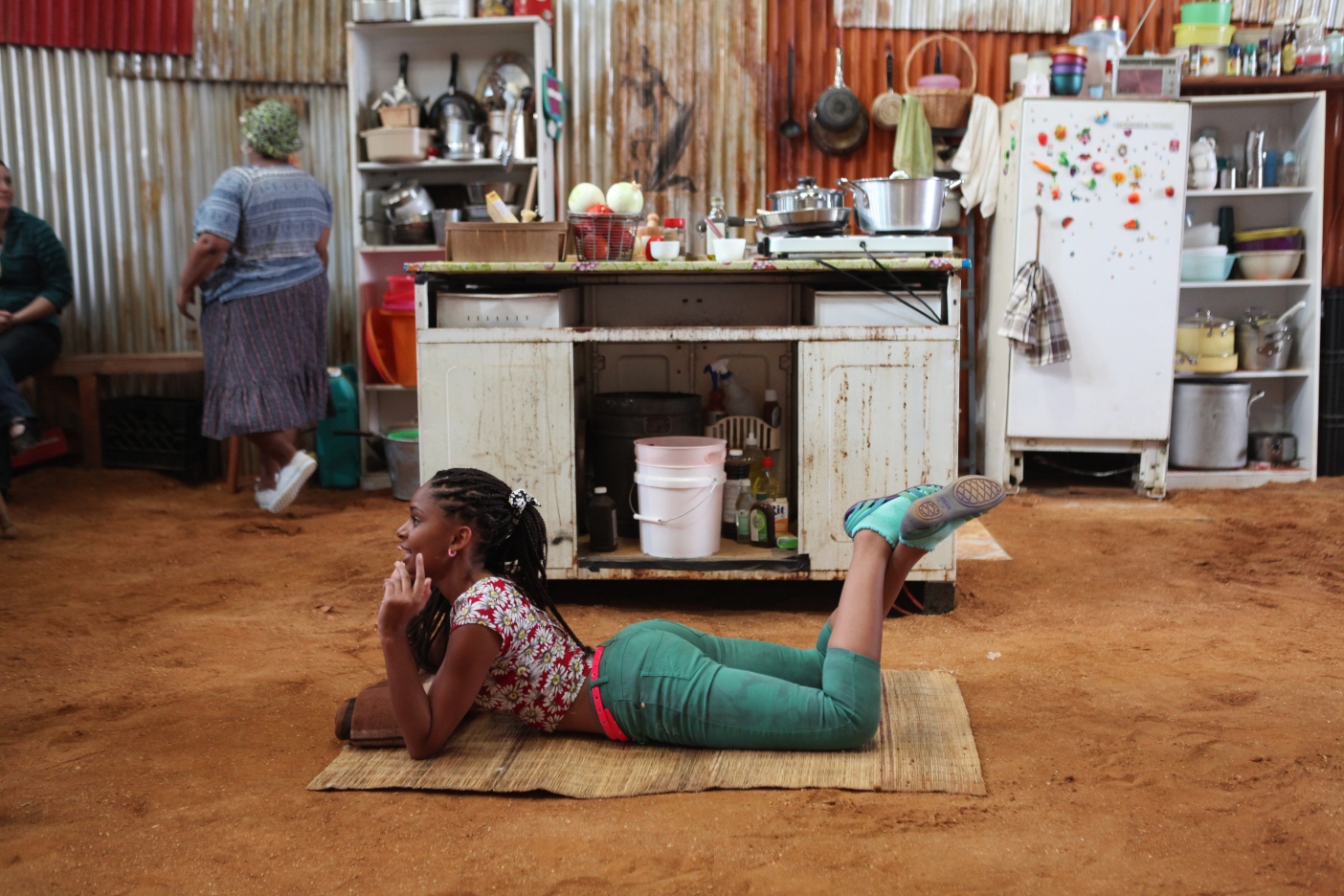 Soho Rep has developed a reputation for reinventing the interior of its theater space, at 46 Walker Street, for each production it hosts. But the transformation for its newest resident, playwright debbie tucker green’s poem-play generations, co-produced with the Play Company, might be the most elaborate yet.

Set designer Arnulfo Maldonado has covered the floor in an inch of burnt-sienna sand, and replaced the walls with corrugated metal slabs in many different colors, behind faded images evoking South-African national and musical culture. As audience members collect around the edges of the space, in the center stands a working kitchen and sink, an oven, a refrigerator, and a single round table, with supplies and foodstuffs piled throughout. The room is bright, pulsing, the central artery of a community far removed from the corporate commercialism of even the most well-meaning off-Broadway theater company. The transportation of a New York audience to the lifeworld of rural South Africa, at least as green and director Leah C. Gardiner have imagined it, is one of this production’s most welcome achievements. The songs of celebration and of mourning that fill this short play more than fulfill the promise of their setting.

generations offers a richer experience than its half–hour runtime would suggest. The play is a three-part poem wrapped in a soaring choral ode. The performance begins when a 13-person a cappella chorus rises out of the audience area. Their music, composed and directed by Bongi Duma, is assaultive in its power, as though the singing collective got lost on the way to a concert hall. After their lyrics has resolved into a lengthy series of names, the inner performance begins. Six actors representing three generations of couples—teenage children, parents, and grandparents—take over with a ritual of courtship and nostalgia.

We watch a young man court a young woman by asking if she is able to “cook.” In green’s text, this oft-repeated word signals the capacity to spin a lifetime out of love. The older women, animated by the youthful spectacle, recall how their husbands asked them the same question. Eventually the young woman yields, happily, only to disappear with her husband in a cloud of sadness. The parents and grandparents repeat the ritual of remembering until the parents also disappear, leaving only the elders to remember, and to grieve.

AIDS is never mentioned in generations, but the shock of a nation of families cut off at the root is painfully rendered. What begins in celebration ends not so much in tragedy, but in confusion and sadness. It’s hard to imagine a more fitting memorial to the previous two decades’ ravaging of the region. Duma’s music supports green’s dialogue by avoiding the temptation toward requiem, instead maintaining a vibrant, celebratory energy throughout. That the national community represented by the play does not lose its spirit in the face of devastation only underscores the liveliness that’s being lost. The swirling movement and naturalistic detail of Gardiner’s direction has the same effect. As the women peel potatoes, crack eggs, and stir soup, they dart in and out of their lovers’ orbits, as the men point fingers, roll eyes, and embrace each other and their wives.

Despite their brief stage time and lack of developed plot lines, the company of actors fills green’s sparse, emblematic language with deep wells of meaning and purpose, evoking all the disappointments and compensating satisfactions of lives devoted to family. Jonathan Peck and Thuli Dumakude, as grandmother and grandfather, are particularly poignant in the play’s final sequence.

A play titled generations ought, like the sequences of bibilical “begats,” to trace the multiplication of pairings, offspring, and family branches. That green’s play moves in reverse, tracking the disappearance of the younger and the sadness of the older who remain, is a simple dramaturgical gesture that makes for a startling dramatic experience. With the crowded, vital stage suddenly reduced to Peck and Dumakude seated at table, green’s world seems to empty itself out. We find ourselves in what feels like a Samuel Beckett scene, in which slow gestures and simple utterances (“I miss them”) become cataclysms.

Review: It’s Only a Play at the Gerald Schoenfeld Theatre

Review: The Curious Incident of the Dog in the Night-Time at the Ethel Barrymore Theatre