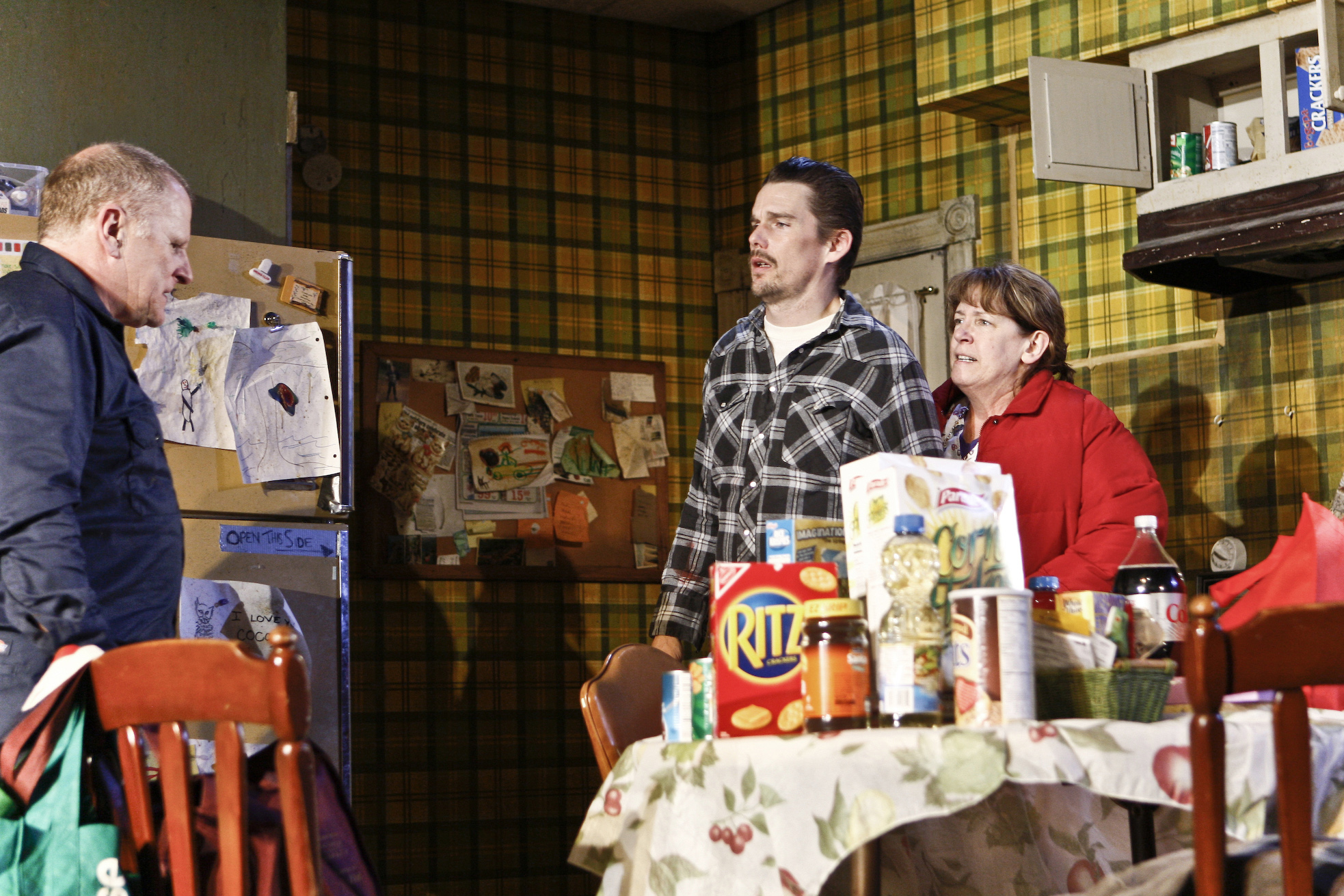 You can’t swing a cat in this town without hitting a theater with a dysfunctional family drama, and this one even has the kitty to prove it. Blood from a Stone, the writing debut of sometime-actor Tommy Nohilly (who I’ll confess up front was the sensitive, appropriately badass security guard in my college dorm), is the kind of maximum opus that former latchkey kids anxiously hope to write someday. And this one has it all: full-frontal female nudity, broken windows, broken limbs, profane verbal digs, even a toppling Christmas tree. Thankfully, it also has the New Group to shape it, and under Scott Elliott’s typically understated direction, with an accent on hushed exchanges (you’d better pray there’s no emphysemic coughers at your performance), the long haul (the break for intermission doesn’t arrive until almost the two-hour mark) is worth your while.

Travis (Ethan Hawke, in his most soulful slacker role to date) returns home for the holidays with designs on hightailing it to Cali and leaving behind his family’s stunted Connecticut roots. Margaret (Ann Dowd), his hard-bitten mother, has a bad hip and even badder mouth and despises the sight of husband Bill (Gordon Clapp), an anger-fueled bundle of nerves with an odd penchant for doing the right thing when called for. He also has a sister, Sarah (Natasha Lyonne), a practical health-care worker with a baby on the way, and a brother Matt (Thomas Guiry), a gambling addict who’s become the family black sheep due to his incessant lies. And then there’s the Latina MILF next door (Daphne Rubin-Vega, in full va-va-va voom mode) whom Travis has carried on an affair with for years, and continues to right in his parents’ house, as if he were a teenager again.

The play’s almost cyclical structure highlights the family’s patterned existence; Travis knows he needs to break free yet is the first to step to the plate when things go awry. He’s clearly devoted to this nuclear unit, yet knows it is inherently destroying him. Nohilly really hits the nail on the head with the realization that sometimes even the most awful of circumstances can be oddly comforting because of their familiarity (one thread that proves revealing is his how every member of his family continually tries to shove money into Travis’s hand). And his way with blue-collar language is utterly believable; Travis’s mother’s use of “damn” as the ultimate adjective, not to mention saltines like “numbnuts,” took me right back to my Buffalo hometown in an instant. The production of this play is so taut, it becomes easy to forget that there’s not much in it you really haven’t seen a variation of before, but it’s the telling small details that leap out at you: the way Travis instinctively knows to look for ginger ale in the basement when the fridge contains none; how Sarah can literally smell the sex on the living room blanket that Travis has been sleeping on; the tacky, aforementioned Christmas tree that’s like an albatross in the corner of the already cluttered room.

The mood is accomplished and suitably tense, though the New Group should really change up their scenic designs a tad these days (sitting down, I swore I was about to re-see last season’s stunning revival of A Lie of the Mind, incidentally, directed by Hawke), and a three-act presentation would have been more effective than the current two; you don’t get to digest certain aspects (like the passage of a day and the shift of attitudes that occur as a result) as satisfyingly as if they had been broken up, and this decision also dilutes the grandeur of this family saga.

But these are minor quibbles overall, especially as handled so delicately by this well-chosen cast: Hawke is completely ideal in the leading role (his boyish yet weathered appearance speaks volumes in this role); Guiry offers a complex reading of the play’s shadiest character, full of recognizable self-doubt; and though they are underutilized, Rubin-Vega and Lyonne have presence to spare. And if this play is autobiographical in nature (and by the unerring tone of certain scenes, it just has to be), then Clapp and Dowd must have sprang right from Nohilly’s run-down Connecticut consciousness; the portrayals are so lived-in at times (Clapp’s errant “huh?” whenever asked a question, Dowd’s perfectly baggy life-preserver jacket) you shiver almost as much as this clan does in their drafty hovel they call home.

Blood From a Stone is now playing at the Acorn Theatre on Theatre Row.

Imitation of Life: The Interminable Suicide of Gregory Church

What’s That Smell?: A Small Fire and Dracula