With Breaking Bad on the march toward its final episodes (the second half of season five premieres August 11), the Film Society of Lincoln Center (FSLC) and AMC are marking the occasion on August 1 and 2 with “The Perfect Batch: Breaking Bad Cast Favorites,” a viewing event to be co-presented by the society and the TV network, and feature guest appearances from actors Bryan Cranston, Anna Gunn, Betsy Brandt, RJ Mitte, Dean Norris, and Bob Odenkirk, as well as series creator and executive producer Vince Gilligan. Each participant is set to engage in a Q&A and share his or her favorite episodes from the series. On August 1, the Q&A moderator will be New York Magazine TV critic, RogerEbert.com editor-in-chief, and The House Next Door founder Matt Zoller Seitz. On August 2, Emily Nussbaum, TV critic for The New Yorker, will take up moderating duties. All conversations will reportedly be live-streamed at filmlinc.com, before finding a home at amctv.com. Tickets for the event go on sale at filmlinc.com at noon today, and are priced at $15 per conversation.

“The Perfect Batch: Breaking Bad Cast Favorites” is part of FSLC and AMC’s week-long celebration of the series, which, just yesterday, collected 10 Emmy Award nominations, including one for Outstanding Drama Series. The celebration, dubbed “Long Cook: A Breaking Bad Marathon,” will begin on July 26 and run for five days. It will feature free, open-to-the-public screenings of all previous seasons, to be held at FSLC’s Elinor Bunin Munroe Film Center Amphitheater. Tickets will be offered on a first-come, first-serve basis, beginning one hour before the start of the first episode showing each day. Seating is limited, but more tickets will reportedly be distributed throughout the day as seating becomes available. Moreover, those who hit up the marathon will be instantly eligible to take part in a Breaking Bad raffle, putting them in the running to win a pair of tickets to the advance, premiere screening of the first episode of Season Five, Part 2. A total of five pairs of tickets will be raffled off. More information can be found at filmlinc.com. Below, check out a complete schedule of “Long Cook: A Breaking Bad Marathon,” courtesy of an FSLC press release, as well as the trailer for this landmark series’s final eight episodes. 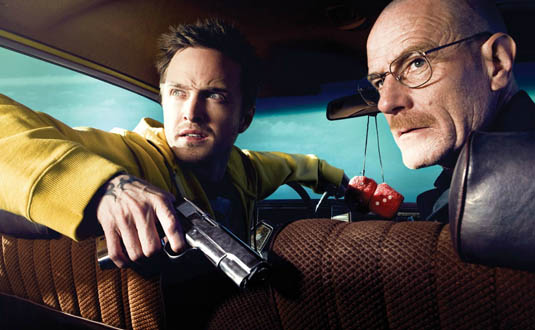 Saturday, July 27 Season 2 (13 episodes), 12:00pm One step ahead of his DEA-agent brother-in-law Hank, Walter begins to capitalize on his life of crime as its insidious effects on his wife, Skyler, and his partner, Jesse, begin to reveal themselves.

Monday, July 29 Season 4 (13 episodes), 12:00 pm With Hank closing in on Gus, Walter does everything in his power to ensure not only his survival but also his ultimate victory.

Tuesday, July 30 Season 5A (8 episodes), 5:00 pm As the Breaking Bad saga draws to a close, characters begin to reach the limits of their criminal morality.

Thursday, August 1 Panel 1 with Anna Gunn, RJ Mitte and Bob Odenkirk: 6:15 pm Anna Gunn and RJ Mitte who play Walter White’s wife Skyler and son Walt Jr. with Bob Odenkirk, who plays the morally uncentered criminal lawyer Saul Goodman, will show two of their favorite episodes followed by a Q&A moderated by Matt Zoller Seitz, television critic for New York Magazine and editor in chief of RogerEbert.com. *For those unable to attend, the conversations will be streamed live through Filmlinc.com.

Panel 2 with Bryan Cranston: 9:00 pm Bryan Cranston, who plays central character Walter White, will show two of his favorite episodes followed by a Q&A moderated by Matt Zoller Seitz, television critic for New York Magazine and editor in chief of RogerEbert.com. *For those unable to attend, the conversations will be streamed live through Filmlinc.com.

Friday, August 2 Panel 3 with Betsy Brandt and Dean Norris: 6:15 pm Cast members Betsy Brandt and Dean Norris have breathed full lives into their characters, Marie and Hank Schrader. They will show two of their favorite episodes followed by a Q&A moderated by Emily Nussbaum, television critic for The New Yorker. *For those unable to attend, the conversations will be streamed live through Filmlinc.com.

Panel 4 with Vince Gilligan: 9:00 pm Series mastermind Vince Gilligan (creator, executive producer, writer, and director), whose previous credits include The X-Files, will show two of his favorite episodes followed by a Q&A moderated by Emily Nussbaum, television critic for The New Yorker.

In Season Two, Undone Expands Its Scope and Loses Its Air of Ambiguity

Video: Moby’s “A Case of Shame”