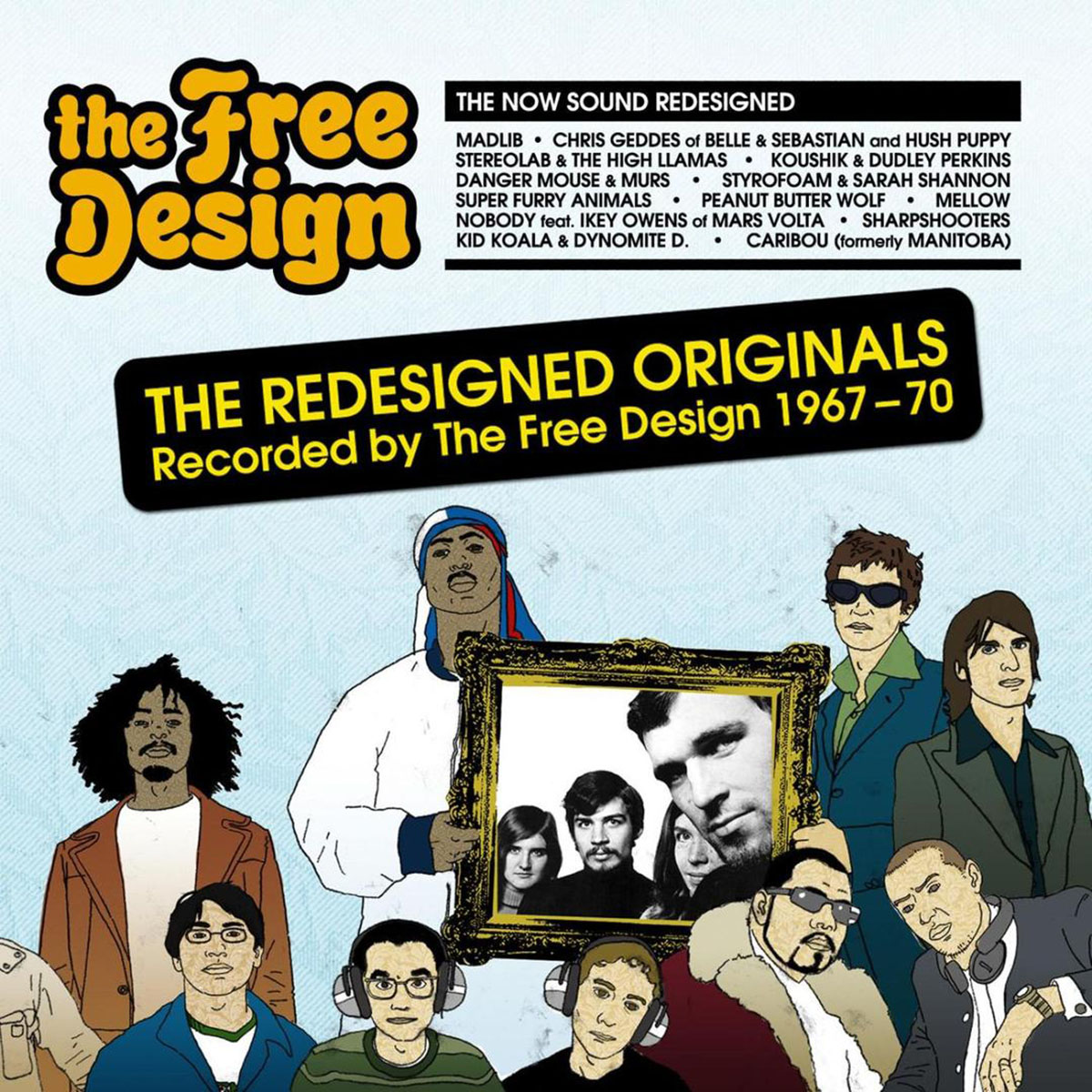 Sixties soft-psych band the Free Design never achieved the mainstream pop success of some of their vocal harmony-based contemporaries (including fellow bloodline bands like The Carpenters and The Beach Boys), mainly because of their choice to sign with the artist-friendly but ill-equipped record label Project 3 (which was, curiously, owned by the Singer sewing machine company…yeah). Despite the moderate soft-rock success of their first single “Kites Are Fun” on the East Coast, the Free Design’s national sales suffered from poor distribution (according to chief songwriter Chris Dedrick, you were more likely to find his band’s music in a sewing machine store than at an actual record shop) and their subsequent releases were eclipsed by the success of similar groups like The Mamas & the Papas and the 5th Dimension.

Since 2003, Light In The Attic Records has been reissuing the Free Design’s seven LPs on CD in an attempt to introduce the band to a whole new audience. Conditions being what they are in the music business today (naïveté may have stunted the band’s growth in the ‘60s and ‘70s but the cynicism of 2005 isn’t a much better environment), the Free Design are even less likely to claim their deserved place in music history, but vinyl bin diggers and those interested in postmodern nostalgia will find a gem in The Now Sound Redesigned, a companion piece to the catalog reissues that compiles remixes from two vinyl EPs released by Light In The Attic last year (the third and final record in the series is being released concurrently with this compilation).

The Free Design, comprised of Dedrick and his brother Bruce and sisters Ellen and Sandra, offered a more studied approach to rock for their time, layering intricate folk harmonies with baroque pop, jazz melodies, and bossa nova rhythms. Those elements are, for the most part, exploited nicely here, particularly on more faithful reconstructions like 1967’s “Don’t Turn Away” (remixed by acid jazz duo Sharpshooters), where the group’s immaculate vocals take the fore, and the glorious love songs “I Found Love” (Styrofoam) and “Don’t Cry Baby” (Koushik) which—with a laidback rap by underground MC Dudley Perkins—sounds like it could have been recorded in 2005.

Indeed, several tracks make Redesigned not just a nostalgia trip but a relevant 21st century release: “An Elegy,” a timely tune originally written for a family member who was killed in Vietnam, is, appropriately, given a Bristol trip-hop treatment courtesy of Chinese-Canadian turntablist Kid Koala and Dynomite D.; “The Proper Ornaments,” the b-side to the Free Design’s very first single, features some acerbic social commentary—not to mention a regal trumpet arrangement—unusual for pop groups of their time…or any time; while Danger Mouse resurrects “To A Black Boy,” the original of which was previously unreleased until 2004, and commissions L.A. rapper Murs to pen new lyrics based on the true story of an 18-year-old African-American high school student who was sentenced to 10 years in prison for having consensual sex with a 15-year-old white girl.

One of the album’s greatest (and most telling) moments, however, comes from Chris Geddes of Belle and Sebastian and Hush Puppy, who transform the prophetic 1969 song “2002 – A Hit Song” (sample lyric: “Add a teenybopper’s face and it’s gotta be a hit! hit! hit!”) into a frenzied, sputtering club track that morphs from drum n’ bass to four-on-the-floor within the span of three-and-a-half minutes. The song itself is a revealing commentary on the band’s professional frustration: “Uniqueness, no weakness!” goes one of the track’s many spliced-up male/female call-and-response hooks. Despite stand-outs like this and others, Redesigned is ultimately a project that succeeds because of the sum of its parts, much like the DJ Shadow-style sampling that makes up its 19 tracks (even the interludes are keepers: the pointedly titled “Crossover,” which precedes “2002 – A Hit Song,” is comprised of campy dialogue from the 1972 British horror film Psychomania). The only thing missing from this comp is “For The Love Of Your Lips,” the song the Free Design wrote and recorded for a creepy 1970 Chapstick commercial that featured a voiceover by Vincent Price.

Review: Son Volt, Okemah and the Melody of Riot