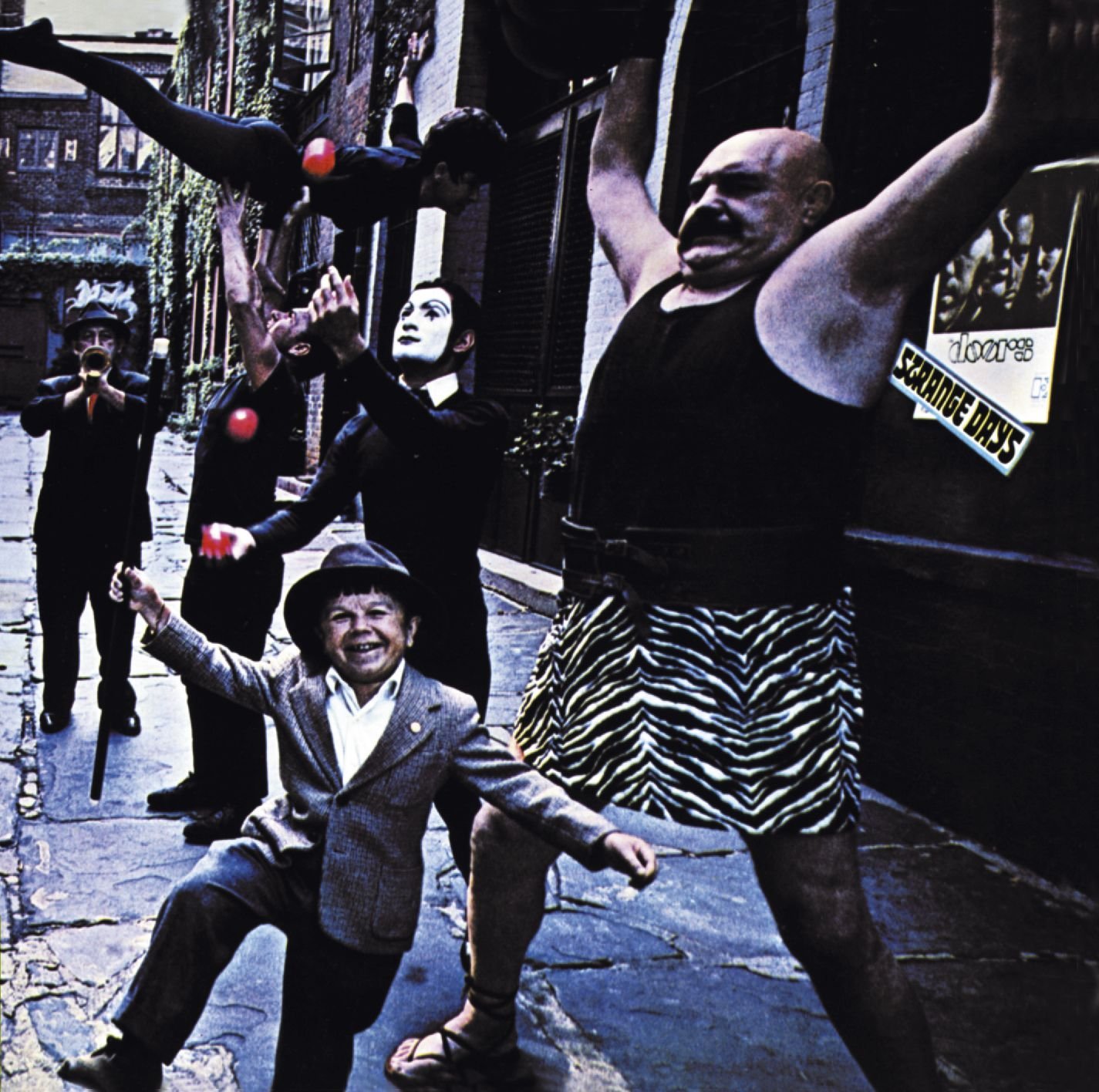 Traditionally, the Beatles and the Rolling Stones duke it out for the tenuous title of Greatest Band Ever. Occasionally, the Beach Boys or Led Zeppelin are part of the discussion, but rarely, if ever, are the Doors mentioned. The band’s ringleader, Jim Morrison, was too much of a pinup—and, eventually, too much of a drunk—for their music to be taken seriously. Had the Doors began a few years earlier (that is, had they not emerged from inside the drug revolution of the late ‘60s), they may have had the chance to mature and hone their skills as a band before transposing their music to the world of psychedelic rock the way the Fab Four had done so successfully around the same time.

But if the Beatles had Sgt. Pepper’s Lonely Hearts Club and the Beach Boys Pet Sounds, then the Doors’s answer was Strange Days. The liner notes of the 40th-anniversary edition of the album details how, in a pre-online-leak world, engineer Bruce Botnick snagged an early copy of Sgt. Pepper’s and played it for the Doors, inspiring the band, along with producer Paul Rothchild, to invent new methods of studio recording. This experimentation can be heard in the very first notes of the title track, as Ray Manzarek’s spacey keyboards set the tone for Morrison’s eerie, distorted warning, “Strange days have found us.” It’s the perfect introduction to a perfectly strange album.

Horsewhips, Manzarek’s prepared piano, and screams of agony float ominously through the echo chamber of “Horse Latitudes”: “When the still sea conspires in armor/And her sullen and aborted/Current breed tiny monsters/True sailing is dead.” Set to a poem written by Morrison in high school after seeing a picture of horses being thrown off a boat, the track segues into “Moonlight Drive,” one of the singer’s earliest compositions. Bouncy piano and Robby Krieger’s bottleneck guitar provide a sunny, almost tropical atmospheric juxtaposition to Morrison’s sinister vocals and lyrics (“You reach a hand to hold me/But I can’t be your guide”) that end with an implied murder-suicide. The Doors were a distinctly Californian band, but this was most certainly not the Beach Boys’s Golden State.

“Strange Days” makes reference to “bodies confused, memories misused,” while “People Are Strange” ostensibly addresses the alienation of hippie culture, hinting at a shift in Morrison’s view of the decadent lifestyle he so ceremoniously endorsed on The Doors just a few short months earlier. If he’d truly opened the doors of perception, maybe he didn’t like what was on the other side—or, perhaps, sudden fame made his indulgences more readily available and, thus, revolting. Where he once traded Debbie Downer for a spontaneous Twentieth Century Fox, “Unhappy Girl” finds Morrison genuinely interested in the titular girl’s sadness. Later, at the very end of “I Can’t See Your Face in My Mind,” he employs his self-described “psychedelic Sinatra” baritone to distill a simple but sentimentally plaintive truth: “I won’t need your picture until we say goodbye.”

It’s hard to find the hits on Strange Days; indeed, there weren’t many and the singles that were released didn’t even crack the Top 10. The album’s most accessible, straightforward rock tune is the racy “Love Me Two Times,” which features a virtuosic harpsichord solo and one of the band’s grooviest guitar riffs. But while The Doors had more frequent, obvious peaks, the quirky Strange Days is a more ambitious, unified work. There are fewer filler tracks and each song carries as much weight as the one before and after it.

You can hear the world weep on “When The Music’s Over,” the 11-minute, apocalyptic ode to music and Mother Earth that closes the album and embodies both the improvisational, instrumental aspects of “Light My Fire” and the epic drama of “The End.” When Morrison asks to hear “the scream of the butterfly,” Manzarek and Krieger’s instruments answer obediently. At one point, the entire band grows quiet and everything drops out except for the bass (notable since it was played by a session musician and not an actual member of the band) until they all scream, “We want the world and we want it now!” (Along with the addition of Morrison asking for another take at the end of the song, the lyric is heightened in the mix on the expanded version of the album.) It’s exemplary of the troubling dichotomy of the so-called flower children, especially following a line like “What have they done to the Earth?,” where the blame is placed solely on previous generations. Strange Days exists as a document of a sometimes beautiful, sometimes scary, and often twisted era of fear and idealism.