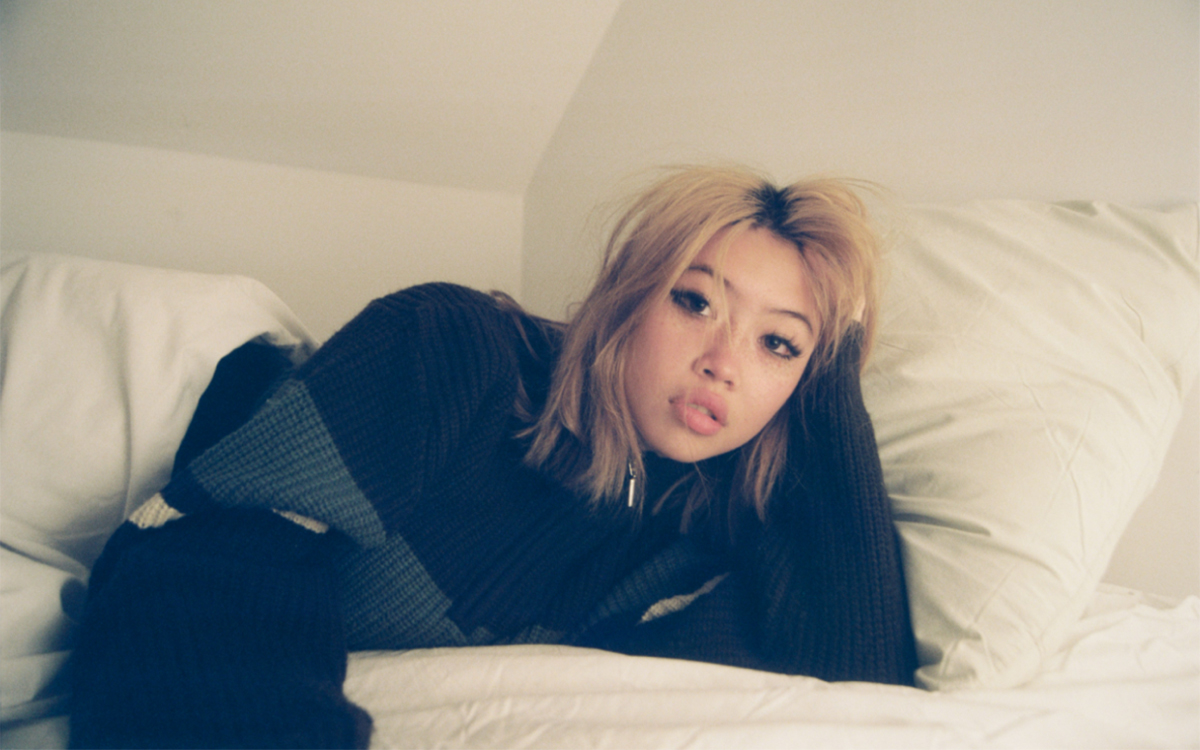 Twenty-year-old Bea Kristi is the first to admit that her music owes a great deal to ‘90s alternative rock, not so slyly hinting as much on last year’s “I Wish I Was Steven Malkmus.” But her output under the moniker Beabadoobee doesn’t come down to mere derivation. Unlike Greta Van Fleet, the zoomer band notorious for aping their own revivalist referent, Led Zeppelin, Kristi molds the earnest, fuzzed-out yearning of the Cranberries and Veruca Salt for her own purposes. The Filipino-British songwriter speaks to the challenges unique to 21st-century adolescence, a tricky period in which emotions are impersonally mediated through screens and exes are only an impulsive text away.

Beabadoobee’s debut LP, Fake It Flowers, inhabits nostalgia like a childhood bedroom cluttered with toys, outgrown clothing, and wall posters that serve as relics of innocence and fantasy. Over 12 tracks, Kristi is haunted by older versions of herself and captivated by wishful daydreams. (Appropriately, she wrote the album hunkered down in her childhood bedroom in her London family home, where she also rode out a bout of Covid-19.) She gives voice to statements one would be remiss to utter outside the privacy of their inner sanctum. On “Dye It Red,” she hurls out venomous lines with matter-of-factness: “Kiss my ass, you don’t know jack/And if you say you understand, you don’t.” Throughout, momentous choruses and distorted guitars turn Kristi’s sweetly sung barbs from the stuff of scribbled journal musings into booming anthems, fit for the soundtrack of a Y2K coming-of-age film.

Across the album, Kristi negotiates the tumultuous fallout of her mistakes, only to relapse, clinging to harmful vices. On the melodic, misty-eyed “Worth It,” she confronts her own infidelity, unflinchingly aware of her wrongdoing but still unrepentant. “Together” sees her draw a parallel between crashing her car for the umpteenth time and getting back together with someone she’s wounded one too many times. At several points during the tracklist, the specter of self-harm emerges as a response to guilt, like a self-inflicted retribution. On “Charlie Brown,” which sounds like an homage to Hole and just as taxing on the lungs, Kristi spills about falling into “old habits that no one knows about.”

Kristi’s imaginative songwriting brings levity to Fake It Flowers. The singer opens “Yoshimi, Forest, Magdelene” by joking that an unidentified noise “sounds like a fart” before pivoting to the fanciful affirmation that she’s so head over heels for a significant other that she can’t help but chant the names of their three future children. Curlicues of piano and acoustic guitar give way to swooning strings on the tender “Horen Sarrison,” an ode to Kristi’s real-life beau. This romance isn’t found in the familiarity of a well-worn routine, but in the adrenaline rush of charged chemistry: “And I want you to know that I’m in love/But I don’t want you to feel comfortable.” Kristi’s vision of affection may be distorted by the impossible-to-replicate headiness of a first love, but it’s an enthralling representation of its ephemeral beauty.

Kristi seems aware of society’s history of ridiculing and undermining women for expressing their grievances in ways deemed too passionate or outspoken. While she pointedly entertains the pejorative “emo” in the title of the introspective ballad “Emo Song,” she nonetheless refuses to understate the origins of her trust issues: “You call me up, and lie again/Like all the men I used to trust.” Throughout the album, Kristi leans into her emotions, unconcerned about whether or not they might make her seem fragile or melodramatic. Songs like the Smashing Pumpkins-esque “Sorry” convey her fragility, buttressed by symphonic string arrangements and pounding drums.

Detractors may believe that alt-rock revivalism is more interested in merely serving up a ‘90s bricolage than breaking new ground. While this may be true to an extent, the songs on Fake It Flowers are far from superfluous. Rather, it’s evident that Kristi revives the sound—which was predominantly represented by straight white men—in order to infuse it with her own life and experience as a Catholic school dropout and daughter of immigrants.