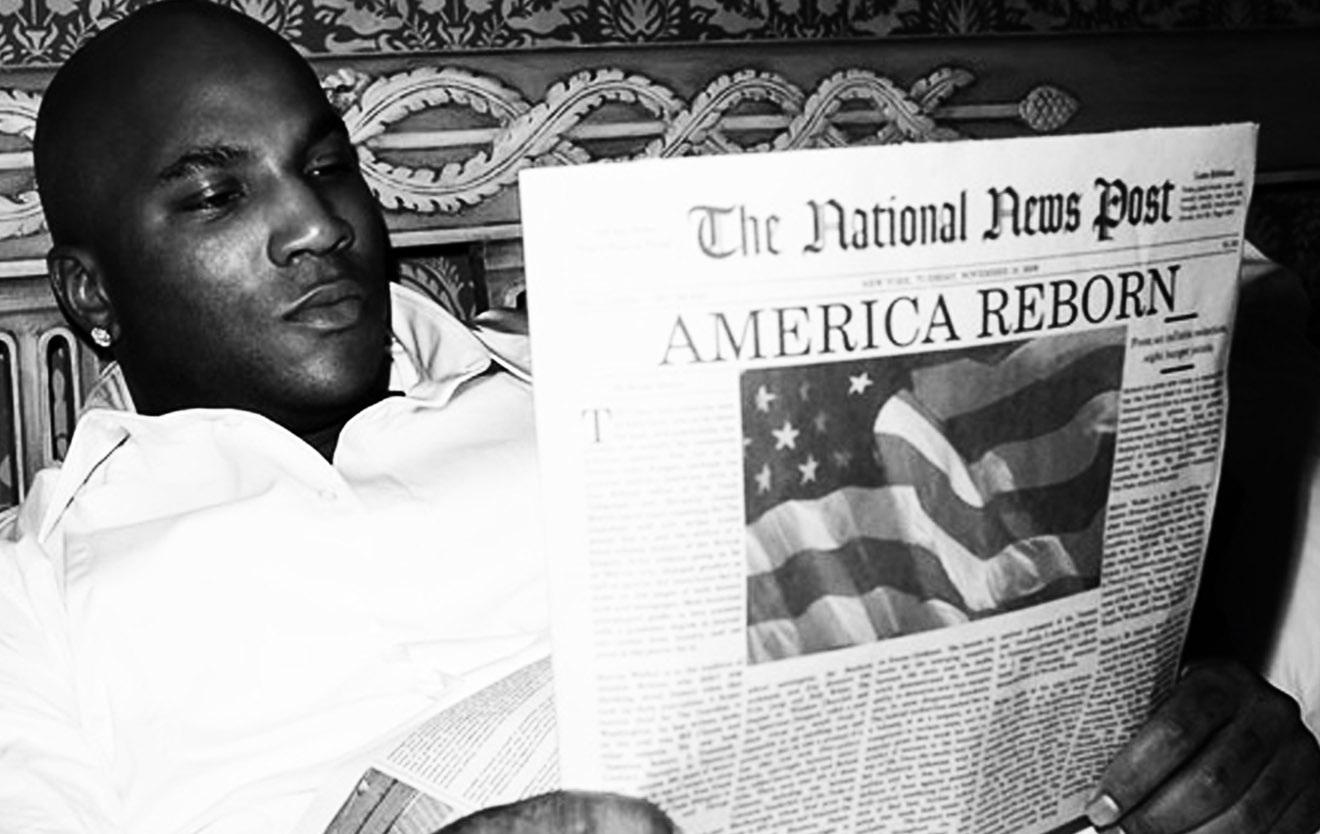 Like most Young Jeezy songs, “My President” is a monster. Unlike most Young Jeezy songs, there’s a stomping, seething sense of joy and a little less get-money nihilism here, as it celebrates Obama’s presidency, or even the possibility of it (the song was recorded when Obama received the Democratic nomination back in June). The song’s the coup de grâce of Jeezy’s fucked-up economy-obsessed album The Recession, wrapping up the frustrations of the previous seventeen songs and looking forward to better, history-changing days. It’s the kind of multiplicity that hip-hop does best.

That hook (“My president is black/My Lambo is blue”) acknowledges the ideal turned reality of “first black president” as well as our puts-us-into-debt materialistic foibles, and is all the more affecting for not trying to parse it out. I smile a little and grimace a lot when Jeezy commits a leap of empathy into the average recession victim’s problems:

While Gabriel Hart’s video doesn’t walk the song’s same awesome line of being product and rarefied expression, he does capture some of “My President”s pluralities. After a pretty absurd introduction to the video—one tacked on fairly recently, not there when the video premiered and better with it absent—a fun sense of flipping or complicating hip-hop clichés begins, starting with that first shot of a blue Lamborghini—keeping with the materialism we anticipate in a rap video. But the camera doesn’t dote on its luxury; it’s shot hand-held and sloppily. When the “Lambo” does return later in the video to be doted-on luxuriously through quick dissolve close-ups, it’s been recontextualized by Jeezy’s sad triumph of a hook.

The biggest flip, though, is Hart and Jeezy’s decision to create an analogue and then update on Spike Lee’s masterful video for Public Enemy’s “Fight the Power”. The importance of Obama’s presidency cannot be overstated but I still get a little nervous when so many declare Martin Luther King’s dream “arrived” or pronounce way more absurd platitudes about “post-racial” America, but “change” is laid bare on the political pop landscape when you compare the big crowd joy of “My President” with the organized outrage of “Fight The Power.”

In “My President,” the crowd’s gathered together in joy instead of angry defiance. Compare the amount of close-up time Chuck D and Flavor Flav receive versus Jeezy. Notice how Jeezy stands surrounded by the wilding-out-with-joy crowd, not elevated above them on a stage like Public Enemy, who must perform or play the role of political leader in lieu of, you know, actual political leaders. But right now, we don’t need the comfort or pseudo-comfort of politically active artists acting as leaders, we just need them to cheer us on to cheer for our President.

The emotion of “My President” is overwhelming enthusiasm, and it’s seen in the quick close-ups of ecstatic supporters shaking signs, the proud stoicism of the biker dude towards the end, or the roving, overhead camera that captures the exuberance of the multi-racial crowd. Look at that mess of signs that conflate noted historical figures of change (Sojourner Truth, Gandhi, Malcolm X) with dead rappers and celebrities (Jam Master Jay, Notorious BIG, Soulja Slim, Bernie Mac) in a decidedly hip-hop “blurring all expected borders” way.

Putting subtle cameos by big-name rappers next to Civil Rights first-waver John Lewis is so inclusive it’s a little stupid or irresponsible, but fits right in with what, in his inaugural address, Obama referred to as America’s “patchwork heritage.” That word—“patchwork”—is an excellent descriptor for Hart’s style in this video. Not a collage or montage-like mix of images, but a cobbling together of ideas, images, rap video tropes, and music video history to make something somehow greater than its parts.

One image though, stands out more than any other and is the only point where “My President” contributes something stunning and independent of the song and Obama zeitgeist—it actually defines Obama zeitgeist in a “history of images” TIME magazine way—and that’s the few seconds we see Southern rap legend Bun B’s face, nearly on the verge of tears. An insular expression of joy that contrasts with the Super Bowl victory enthusiasm of most everybody else, Bun carries the full weight and magnitude of the event on his face.

In light of Obama’s election and it’s positive implications for our country (made more than ideal by big moments like the impending closure of Guantanamo Bay and minor ones like not totally clowning McDonald’s worker “Julio”), politically-engaged protest art has the odd effect of feeling passe and cynical. Fully aware dissent don’t end when something good happens, the premiere of Young Jeezy’s “Crazy World” video a week or so after Obama won the presidency, felt decadent and irrelevant, a relic of knowing cynicism that we could now look beyond, right? Right? RIGHT?

The best place to start is with the marching militants that pop-up throughout “Crazy World.” Clearly a reference to Public Enemy’s S1W (Security of the First World)—P.E’s politicized version of back-up dancers—the video grabs from and borrows politically active imagery of the past. Extending the righteous anger of P.E to a decimated quasi-urban landscape or throwing in some menacing McCain and Palin masks is effective as broad, digestible pop protest. And really, “Crazy World” succeeds on its inability to do nothing more than sum-up a certain sentiment at a particular time in history.

But “Crazy World” more than succeeds as a well-wrought sequence of upheaval, touching on some of the insanity of Katrina and working mostly on a visceral level. The best moments are the ones that present chaos and don’t come fully equipped with loaded political context (like those McCain and Palin masks). Jeezy speeding through the chaos on a dunebuggy’s particularly inspired, as is an image of a group of Emus darting down the street through a crowd of manic, rushing bodies.

Both of these images work precisely because they lack context. The viewer develops a backstory in the absence of one that’s been formally developed or even hinted towards. Jeezy’s dune-buggy sort of connects to Mad Max—or at least, Hype Williams’ “California Love”—but it’s more a sly comment on his sympathy—versus core empathy—for the recession-affected, as he’s surrounded by them, but still a little distant, and because of his dune-buggy, can escape. Of course, this isn’t some sly deconstruction of Jeezy’s concern; it’s in line with Jeezy’s apprehensive but still affecting placement amongst the economic shitstorm. One of the song’s most telling, darkly-funny and damned honest lines of the song goes, “I want a new Bentley, my auntie need a kidney/And if I let her pass my children never will forgive me.’ Heartless and weirdly heartwarming.

Those Emus broaden the scope of the chaos and tragedy suggesting the entire world’s on-the-brink or that, at least, the local zoo’s a wreck too. The video doesn’t need to show it and just shouldn’t, but if an Emu’s loose, then somewhere something bigger and scarier is too. Especially brilliant is the moment where one of the rushing crowd feels the need to chase down the Emu—for what, we don’t know. It’s the perfect representation of in-the-crowd adrenaline and desperation that happens in horrible awful moments like Katrina.

Unlike “My President” or “Crazy World,” which feel like affecting but mannered adaptations of the songs, the “Pressure” video—from this summer’s rather slept-on I Pledge Allegiance to the Grind II—gets the mix of fuck-everybody-for-this-bullshit-anger and tough-minded, this-is-what-we-can-do-about-it fervor perfectly. It will never become a relic of cynicism.

“Pressure” never even tries to be conventionally coherent or message-oriented like “Crazy World”. Instead, the video works with point and counter-point, employing conventional, classic film grammar (something movie directors rarely do; music video directors even less so) into raging montage. When you cut between our Jesus-loving ex-President, any number of black church leaders, and Jim Jones, there’s an overt but not obvious connection between all three of these schlockmeisters, topped off with Godardian onscreen text: “Churchs Make 20,000 Annually.” The constant thread is hypocrisy and corruption, not relegated to certain races or political persuasions.

That text, either hard facts or hard-ass sloganeering, really is Godardian—it has the sloppy chaos of his 70s work and 90s video work, only Killer Mike believes what he’s saying, and is also closely connected to the anarchic strands of graffiti writing (one of hip-hop’s five elements). Like Basquiat’s SAMO or Borf, “Pressure”s on the “medium is the message” tip, where the presence of the image in and of itself has an inexplicable but menacing point that can’t be pinned down. The video’s there to overwhelm, terrify, then enrage you. When an image of Barack Obama dancing with Ellen DeGeneres comes across the screen, what are we do to with it? OJ trying on the infamous black glove? It’s reducing these moments to the image themselves; also all their hundreds of contexts; and none of them too.

Images bounce off one another and rhyme and conflict and complement and sometimes even just stand on their own. Killer Mike rapping to a wide-angled, dirty security camera, the melange of famous political footage, celebrity gossip trash, and the kind of footage people post on message boards because it’s sick and violent, all placed into an almost end-of-days context. It’s less a relic of right-minded cynicism than a reminder to never get too complacent, even when history, the good kind of history, is in process.