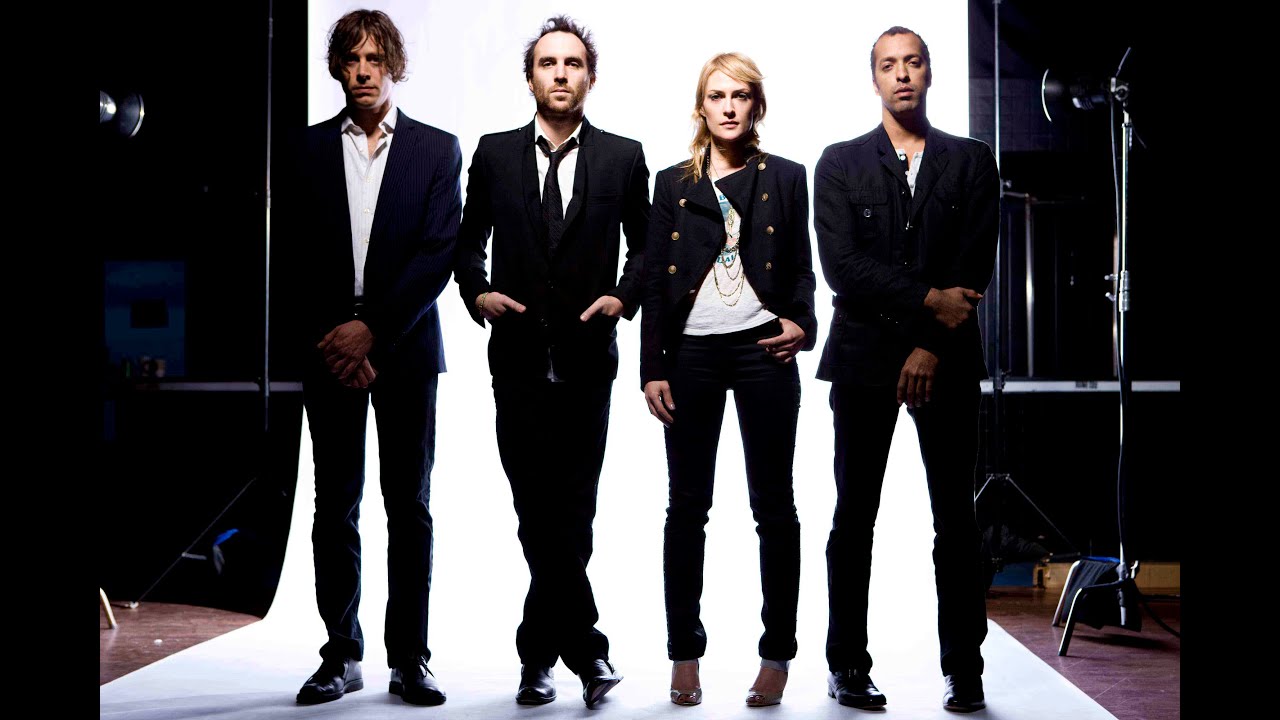 Metric, Fantasies: 2008 didn’t have a single song that struck me as immediate, must-repeat listening, but there’s already 2 new additions to my last.fm Top 25 Most Played Songs this year, so I know we’re doing well. One is The National’s one-off single “So Far Round The Bend”; the others are actually two songs that shake me up to just the same level by Metric. This isn’t what I was expecting. Metric’s released two albums where fantastic songs (their breakout single “Dead Disco,” “The Police And The Private” on Live It Out) battle it out with the frankly embarrassing. Metric’s instrumental members are pretty much impeccable, a disciplined and well-oiled rhythm section that could give The Strokes competition; it’s leader Emily Haines who’s the biggest liability. The undeniably stunning Ms. Haines is a gorgeous blond with a very pleasant voice, realistically making her the band’s biggest asset. She’s also the daughter of Canadian poet Paul Haines and takes herself very seriously indeed, frequently making Political Statements, as on “Handshakes,” an excellent song from Live It Out which unexpectedly collapses as soon as Haines howls “Buy this car to drive to work/Drive to work to pay for this car” (exactly the kind of bratty “indictment” of capitalism you’d expect from a band that has the luxury of, uh, not working a day job). As Michael Hann writes in the Guardian, “Haines sometimes sounded like the person who corners you at a party to tell you that your vodka and tonic is directly responsible for torture in South America.”

Haines mostly stays out of her own way here, even if there is a song called “Gold Guns Girls” (it’s still pretty catchy, but I’ve stopped listening to it). Catchy is what Metric does, and part of the reason they’ve never been very cool is how slick they are; they’re always one step away from a “Maps”-style breakthrough, and they’re nakedly angling for it. These are meticulously recorded songs, very orchestrated, and totally radio-ready; fortunately, they’re quite good at this kind of stuff. Haines treads the fine line between cliche and workable metaphor; “Help I’m Alive” is super-atmospheric, and Haines declares “Help I’m alive/My heart keeps beating like a hammer,” which is pleasingly lucid. “Collect Call” is the best ballad, and it uses gorgeous synths that float into late-night depression. The knock-out song, though, is “Gimme Sympathy,” a song so awesome it makes me want to be 15, have emotional breakdowns and keep a LiveJournal with overwrought emotional confessions. (Again.) Theoretically, this song is about Metric’s ambitions as a band, and what they might hope to achieve. “Who would you rather be, The Beatles or The Rolling Stones?” Haines asks. This is the kind of endlessly annoying question people ask each other at backyard BBQs. I don’t really care what Haines thinks she wrote though; to me, this is an endlessly heartwrenching break-up song. (Related: yes, I’m a pussy.) “Gimme sympathy, after all of this is done,” Haines starts off, which sums up precisely what happens after, when you break-up with someone but haven’t made the leap to total separation, you’re begging for the kind of patience and sufferance you have no longer earned, as you are now in the wrong.

Better than the album as a whole is the Fantasies EP, which is theoretically available only as part of an insanely expensive band-issued deluxe package, but which anyone with a bit of net-savvy can find easily. Aside from “Help I’m Alive,” the EP features an acoustic version of “Gimme Sympathy” that’s equally devastating, an excellent cover of Pink Floyd’s “Nobody Home” that strips away all of the sound-collage conceptual crap that drowns its original incarnation on The Wall and a song called “Waves” just as wrenching as “Gimme Sympathy.” Metric might never make a perfect album, but they’ve made a perfect EP. (Aside: the Pitchfork review didn’t actually tear it apart as much as I expected—6.4—but nonetheless suggests that “the more the group embraces an inky, ambient future, the better it could get.” This is inane. We are talking a populist band here, not some kind of drone-focused pseudo-electronica group. There’s nothing wrong with hooks.)

Cymbals Eat Guitars, Why There Are Mountains: I’ve waited a long time to be pandered to like this; the sprawl of late-‘90s indie rock is back. Cymbals Eat Guitars are a bright group from Staten Island who apparently love Built To Spill as much as anyone else and aren’t ashamed to show it; from the opening notes of “And The Hazy Sea,” I knew I was onto a good thing. Given that even Built To Spill aren’t capable of equaling their ‘90s triumphs these days, I see nothing wrong with this kind of naked derivation—at least in part because this requires intricate, twisty, multi-layered structures and harmonies that require thought. I like structure and complexity (though I realize that makes me sound like a prog-rock freak), and it’s not like it’s easy to do even if your starting points are obvious. CEG bring the guitar squall, and they’re also quite good at the kind of boozy, lurching ramble that requires horn sections, as on the surprisingly jaunty “Indiana.” The words—the parsable ones anyway—aren’t bad either; I like the evocative mention of “adolescent summoning rituals” on closer “Like Blood Does,” a creepy tale of disappearance with a sense of humor: “I’ve been finding clipped-off Parliaments everywhere lately / I take it as a sign that you’re around.” This may be a bit screamo-y for some (although if you’ve been putting up with Isaac Brock, you really have no excuse), and not all of it is moment-to-moment memorable, but the whole thing is a pleasant wallow in a sound that hadn’t been gone long enough to be revisited. Until now.

Doves, Kingdom of Rust: I suspect a lot of music critics are cool with Doves less for what they are than for what they’re not, viz. that they bring the Britpop anthems without resorting to the naked, simplistic pandering of Keane and their ilk. Personally, “The Man Who Told Everything” is one of my all-time faves, and The Last Broadcast is bucking for top 20 albums of the decade, if not top 10. After their first two albums, the ex-dance team backed off from the overwhelming bombast they were so good at: much of Some Cities sounded deliberately ambient and patchy. The songs were (mostly) as strong as ever, but they sounded more distant. On Kingdom Of Rust, they’re as clear as ever, but the songs avoid going over-the-top: the results are accomplished, intelligent and bit remote for my taste. “The Outsiders” has a huge intro, but the song itself is quite tense, all restless guitar runs and no chorus. Even Some Cities had the massive “Walk In Fire”; this is just keen, well-crafted tenseness, which I can find elsewhere. But there’s no denying their intelligence.

M. Ward, Hold Time: I think Ward peaked already on Transistor Radio, where he had the good sense to alternate between full-fledged songs and fragments that were perfectly satisfying as such without feeling the need to pad them out into “songs.” As always, you basically can’t argue with Ward’s songwriting skills or his deeply felt, archaic aesthetic. Hold Time is his most sonically ambitious production, by which I mean there’s strings all over the place and they kind of cancel each other out. I don’t know why there’s a 6-minute ballad called “Oh Lonesome Me” on here or why another song is called “Epistemology.” I mean, dude is call and all, but I might start ignoring him soon; there’s nothing here that reaches out and grabs you like on his past few albums. It’s terminally becalmed. (I know, I know; everyone else thought he was boring a long time ago.)

Julie Doiron, I Can Wonder What You Did with Your Day: I’m not at all familiar with Doiron’s back catalogue (either solo or as part of Eric’s Trip), but this came recommended and is only 31-minutes, so what the hell. This is cutesy as hell: “Nice To Come Home” begins with “It’s always nice to come after getting lots done. I slip off my boots, take off all my coats and go right into my room.” (And her b/f? “You probably played guitar too.” Vomit.) But she gets to do whatever she wants because that song is immediately followed by the awesome “Consolation Prize.” It is safe to say this is the most awesome acerbic angry break-up song ever written. “People insisted on telling you what a great couple you had been,” Doiron coos. The guitars are loud and angry. Someone smashes something, and it lunges for the chorus one more time. Essential.

Dennis Wilson, Pacific Ocean Blue: One of the major changes in my listening habits in the last year is that I’ve stopped viewing the ‘70s as a musical wasteland redeemed by glam and post-punk and started to embrace the gooey, cheesy aspects as well, in no small part thanks to the awesomeness of Elton John’s Tumbleweed Connection. Pacific Ocean Blue was much-ballyhooed upon its re-release last year, per all things old-school Beach Boys, though it’s really got nothing to do with that. The album proper is just OK, although opener “River Song” and also “Rainbows” are gorgeous and stirring. The rest is amusing in a very ‘70s way, as when Wilson proclaims with a straight face “I believe in rock ‘n roll” on “What’s Wrong” while the saxes blare. The real meat is in the odds and ends, primarily in the form of the Bambu sessions, which are in various states of completion, but is 90% of the way there. There’s gorgeous, deeply felt ballads Ben Gibbard would kill for—“It’s Not Too Late,” “Only With You,” even the ludicrously named “Tug Of Love (Feel The Pull)”—as well as synthesizer-based curiosities like “Are You Real.” The ‘70s cheese factor is amped up to an even more entertaining extent, as on “Wild Situation” (as in “It’s a real wild situation”). The songs are the best they could be while being so firmly of their time; as an anthology of great schlock, it’s tremendous fun.