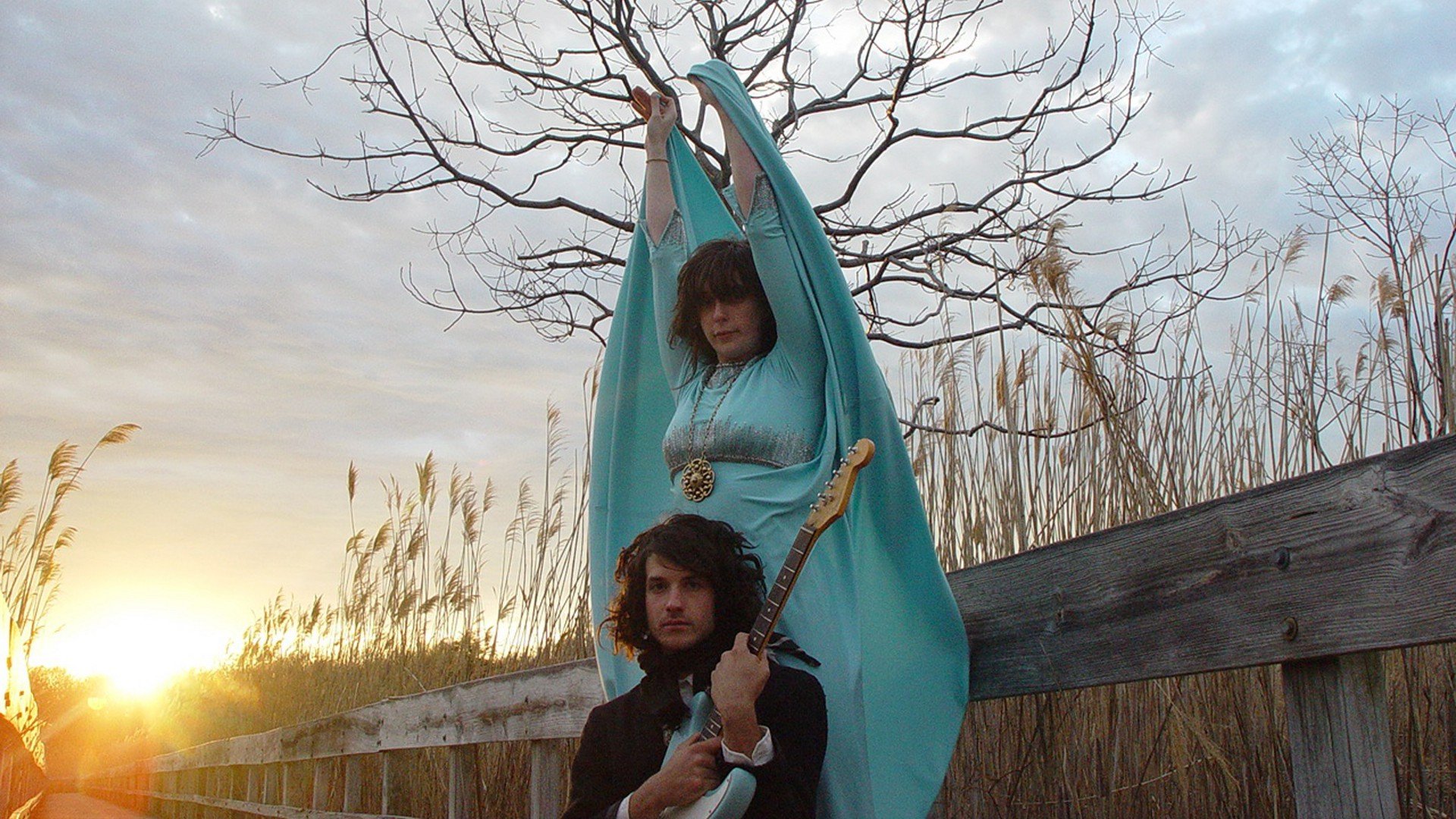 Baltimore-based Beach House is a band with a problem. Their self-titled debut seemed fully formed: nine songs virtually indistinguishable on first listen, relying on a command of minimal instrumentation and slow tempos. Further listens revealed that the songs were actually structurally and melodically quite different, but it’s drug music: hazy, narcotic stuff, gaining its initial impact from uniform atmosphere first and difference later. Where to go next but repetition?

Devotion (technically coming out next week, but surely blowing up a million BitTorrent feeds near you) blows past the sophomore slump in record time. It’s a more expansive album in every way: rhythmically, instrumentally, better mastered (no hiss anymore), you name it—and the really amazing thing is that they manage to keep upping the ante for most of the record rather than blowing their bag of tricks in the first five minutes. Of course, it helps when you’re starting from nothing, and opening “Wedding Bell” is just about poised there: the first sound is literally sandpaper shuffling. But the shuffle is the key—in the band’s micro-sealed dynamics, adding a little swagger is crucial. This is one of those follow-ups that retroactively points out the flaws of what seemed fully-formed at the time (cf. Talking Heads’ More Songs About Buildings And Food—or, on less rarefied ground, You Could Have It So Much Better vs. Franz Ferdinand).

If the debut gained its power from the cumulative impact of a rarely disturbed hush, Devotion is about as loud and epic as an album can be from a two-person band where neither guitar nor drums are the primary instruments. It’s a steady upward climb: there’s a steady two-four kick-drum on “Holy Dances,” which is practically a John Bonham solo in context. Whereas before organ was prominent only through sustained VU chords, “All The Years” has the nerve to pull out some arpeggiated lines that wouldn’t be out of place in Phantom of the Opera, and “Heart of Chambers” expands the dynamic range with a guitar line that climbs nearly three octaves.

I’m reduced to bland technicalities because Beach House is still basically a girl with a pretty voice singing some very slow songs; the difference seems to be that before the music served only to foreground Victoria Legrand, whereas now it’s apt competition. Devotion is a knock-out album by a band that seemed to have pegged itself down already.

Speaking of Victoria Legrand: yes film score fans with long memories, she’s indeed the niece of that Michel Legrand, and There Will Be Blood is the last great film score. I’ve decided the only way this column will ever blow up is through ridiculous hyperbole, so bear with me for a second here. Last year, for about two seconds I seriously thought about contacting a bunch of editors blind because I thought I had a pitch for a feature (didn’t go anywhere, thanks for asking): the indie rockers taking over the soundtrack business. This is only half an exaggeration: John Williams won’t be alive forever (keep the cheering down to a minimum, please), and the original score is nearly dead now anyway. What started as a hack-y Hollywood trend denounced by film-score hounds (I was one once, pre-pubescence, when it served as a bridge between classical music and pop)—the erosion of the score in favor of a jam-packed tie-in soundtrack, full of tossed-off B-sides, one-offs and greatest hits that could be used for ancillary profits in case the movie tanked—has become, de facto, the expressive norm for filmmakers presumably tired of the melodic and unimaginative. (Why, they’re just like indie rock critics! Anyway…)

P.T. Anderson was once the enemy—if by “enemy” you mean “made greater expressive use of Supertramp than was previously thought possible”—but now he’s given rise to two semi-major voices in the field. Jon Brion’s score for Punch-Drunk Love and now Jonny Greenwood’s score for TWBB have far larger followings than just the usual listeners. They’re just joining the ranks of indie-rockers who, following godfathers Danny “Oingo Boingo” Elfman and Mark “Devo” Mothersbaugh, prove that conservatory training is out. (Others who’ve joined them: Mark Olliver Everett (better known as the frontman for Eels), who scored Levity, and Clem Snide’s Eef Barzelay, whose nearly unlistenable score for Rocket Science had one too many quirky jews-harps for my taste.)

Greenwood is by far the most conservative of the bunch, meaning that he’s produced an impeccable and, it should be noted, completely awesome love letter to 20th-century dissonance; indeed, it could be the most chromatic score of its kind since John Williams (you can’t get away from him!) did a surprisingly good job on Close Encounters Of The Third Kind—a movie TWBB referenced with its first shot. I can’t recall the last time I’ve heard so many back-to-back string quartets, pumping out the Soviet classicism like no one’s business (those more grounded in Prokofiev and Shostakovich than myself may just yawn). All the dissonance is structured around a simple three-note theme as piercing as any Ennio Morricone trumpet.

This is the first time in years I’ve listened to a soundtrack to get back in touch with my favorite parts of a movie, so the fact that the cues are sequenced out of their film order fucks with my head a bit: “Henry Plainview,” aforementioned CE3K-baiting opening, comes five tracks in. The money track is “Prospectors Arrive”—the hauntingly empty cue playing as Daniel Plainview addresses the town as to what he hopes to achieve. (Schools, irrigation, etc.) Listening to it is a mental tracking shot of its own, but—to answer the Radiohead factor—this score really isn’t that far off from Greenwood’s home band after a few listens. “Prospectors Arrive” is as in thrall to quiet melancholy as, say, “You And What Army.” It’s a terse, lovely soundtrack, and I can’t recommend it highly enough; if nothing else, with Alex Ross’s The Rest Is Noise virus going around, it could serve as a fine in-point for anyone wanting to get further into the subject.

If someone wanted to call me on the somewhat smaller swath of albums being taken down in this column, well, it’s true. Part of the reason involves taking time out to listen to stuff generally off my radar (last time I’ll plug this, I swear, maybe: Barton Carroll is decent, The Shackeltons not so much—the comments on the latter are a blast though). But what do I have time for? Why, Rock Band, which some friends of mine bought recently. Some thoughts:

* Sleater-Kinney’s Carrie Brownstein had a nicely contemptuous appraisal in Slate. While noting the obvious with great elan—viz., this game has nothing to do with the actual experience of being in a band or playing music collectively—she also points out that the drums “would look at home in a 1980s Flock of Seagulls video—four color-coded circular drum pads and a kick pedal.” Indeed, the lack of songs with treated ‘80s drums is sad. There’s a total lack of ‘80s synth-pop here, which seems like a waste of potential.

* Score one more for Brownstein: “Rock Band puts you inside the guts of a song.” Yeah it does. Simplified drum parts or not, the rather meat-and-potatoes song selection reminds you that, even if you’re doing the Dave Grohl part for Nirvana, you have to keep that fucking 2-4 and hit the kick drum. Back to basics, which gives you, in a way, an even greater for drummers if you’re the kind of person who tends to tune out the basics and listen to the frills.

* Speaking of St. Kurt: “In Bloom” is the song where he screams “He knows not what it means when I say”—and here Rock Band’s lovely transcriptions help the vocalist out—“Yeaaaaaaah. UUUUUUUUUUH.” [Paraphrased.] This is either the smartest or dumbest fan flip-off of all time, a teen flipping out at people for ignoring their lyrical wisdom, then pointedly offering wisdom.

* Apparently none of the songs we played involved “Tier 9” mastery, but have you ever noticed how insanely Julian Casablancas shreds his vocals on the Strokes’ “Reptilia”? It’s worse than Cobain’s roar; I just never noticed before because of the intentionally distanced recording of the first two albums. Then I listened again, and he’s just killing himself. Why? I think part of the answer is because on the third album, he let himself record without interference, and he turned out to sound just like Stephin Merritt. That was freaky.

* While Rock Band has its share of humorless, pompous Classic Rock monstrosities—Boston’s “Foreplay/Long Time” is the dumbest song ever—it does a way better job than Guitar Hero of letting all the kids at the party play to something they knew. Forget ‘90s alt-radio staples like Nirvana and “Creep”; when I was in high school and all the hipster kids were geeking out about the presumably indisputable genius of The New Pornographers (I disputed, but never mind), never in my wildest dreams did I imagine that frat houses in four years would be confronted by the sheer oddity of the song and dismiss it as harder to master than Boston’s wanky bullshit. Or that the New Pornos would come close to being the new prog rock for sheer notes per minute.

* What’s the most fun song to play? The other high-school flashback song that’s now even more mainstream than it was when the high school hipsters deemed the Yeah Yeah Yeahs sell-outs for getting on MTV? “Maps”. The revenge of the high school nerd is complete.