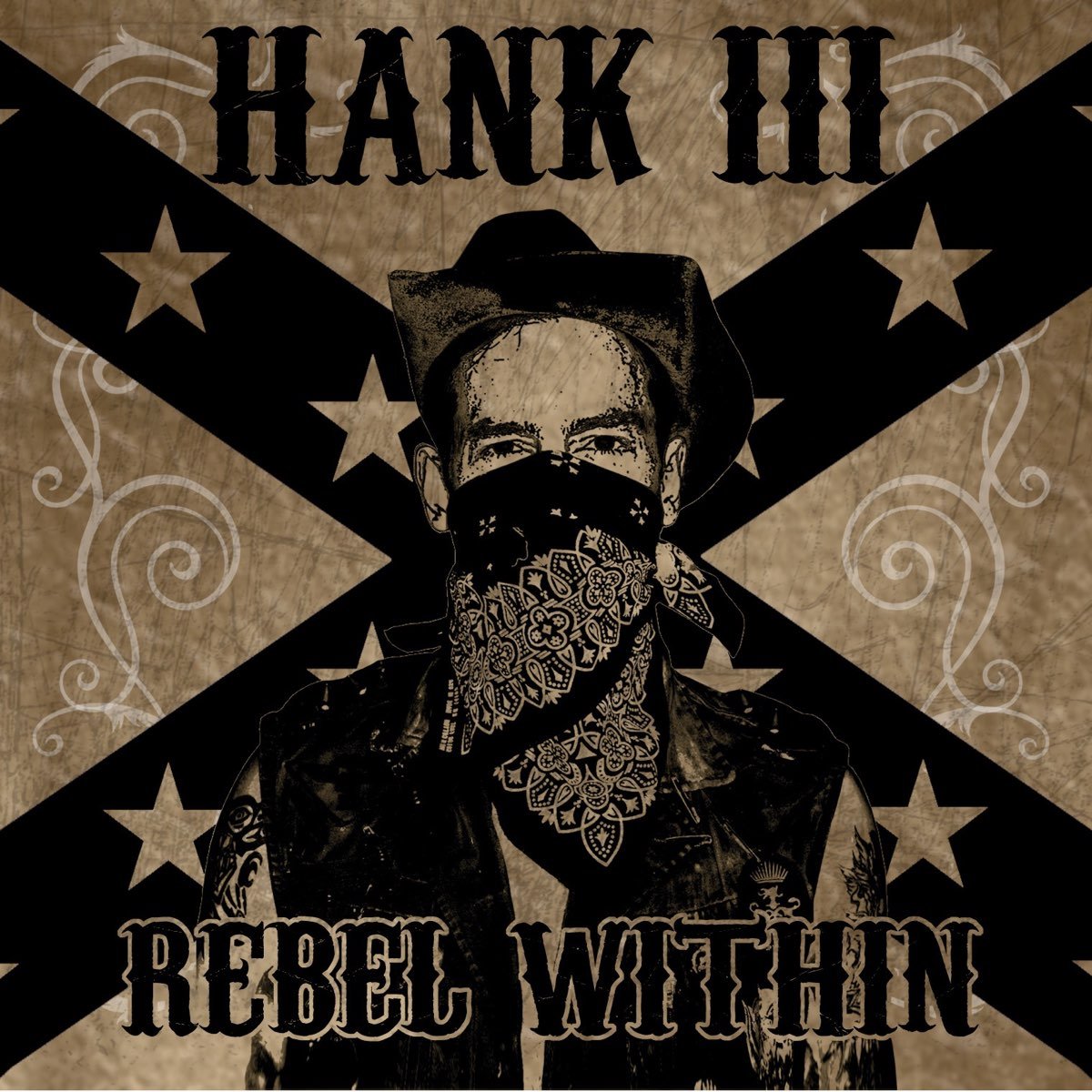 Since making his solo debut with 1999’s Risin’ Outlaw, Hank Williams III hasn’t been shy about voicing his displeasure with Curb Records. Insisting that the executives at the label stifled his creativity (they spent years balking at the prospect of a proper album from Assjack, Williams’s metal band, before finally releasing their debut in 2009), Williams channeled his rage into the creation of a fully realized persona built on equal parts spite and vice. Fortunately for Williams, that persona has translated into some tremendous music: Rebel Within, his final album for Curb, boasts the same hybrid of traditional country conventions and punk ferocity that has made Hank III a worthy heir to his famous lineage.

For many country purists, Williams’s liberal use of profanity and his unapologetic references to hard drugs are simply too much to bear. While there is certainly an element of posturing to songs like “Gettin’ Drunk and Fallin’ Down” and “Drinkin’ Ain’t Hard to Do,” to dismiss Williams’s material outright because of its subject matter is shortsighted. Both of those songs betray Williams’s intuitive and unassailable mastery of the country songwriting traditions that, along with God knows what other substances, course through his veins. And both of those songs prove that his posturing isn’t empty. “Drunk” opens the album on an unexpected note, with Williams actually considering the toll his hard living has taken on his spirit and body; “Drinkin’” is indebted to countless country songs in which someone boozes away the sting of a failed relationship.

In other words, Williams knows what the hell he’s doing. It’s fair to question his taste: His unironic reverence of a clan of honest-to-God sociopaths is a major talking point from the recent documentary The Wild and Wonderful Whites of West Virginia. But the quality of his songcraft and arrangements speaks for itself. From Billy Contreras’s fiddle work on “Lookin’ for a Mountain” to Andy Gibson’s prominent steel guitar on “Lost in Oklahoma,” Rebel Within often stands as Williams’s most forceful defense of traditional country music.

What impresses most about the album is the extent to which it expands Williams’s vision. He’s been accused of being one-note, but that superficial reading of his work is especially off base on this album. There’s still palpable anger here (the coda to “Tore Up and Loud” gets off a parting shot at Curb), but songs like “Moonshiner’s Life” and “Drinkin’ Over Mama” take hard, seriously weighted looks outward at the consequences of unfocused and misdirected anger. “Gone But Not Forgotten” is a surprisingly soulful and unaffected ballad of heartbreak. His references to being an outlaw are also more sparse than on Damn Right Rebel Proud. That point of view gives color to the restless spirit of “Mountain,” but it isn’t the sole purpose of the song or the album.

Williams hasn’t demonstrated such breadth since 2002’s Lovesick, Broke and Driftin’, which was arguably his last purely country record. But he’s become a far more compelling and far more important artist since that album, and Rebel Within is all the better for its perspective and scope. A few ineffective choices, such as the guest vocals from what sounds like Cookie Monster in the chorus of the title track, may raise an eyebrow or two, but Rebel Within is just tremendous stuff. If this is the kind of record Williams makes when his vision has been meddled with by record label execs, it’s hard to fathom what he’ll come up with now that he’s a free agent.

Review: The Wild and Wonderful Whites of West Virginia