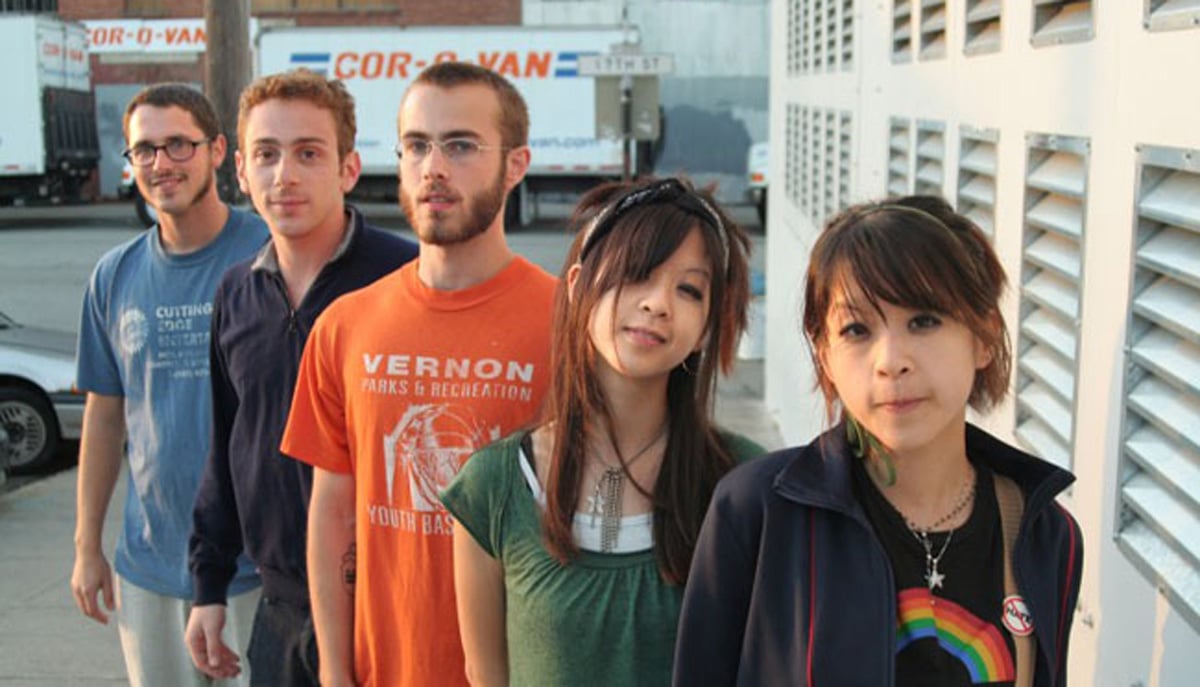 There are so many indie bands out there doing the same frickinā thingānamely trying to be as “indie” as possibleāthat itās kind of a shock to the system when you actually get to see something unique at a live show. What qualifies as “unique,” you ask? How about a five-piece rock band fronted by identical twin sisters singing close harmony over effects-laden guitar work and driving, synth-powered beats? Still not satisfied? What if that band also wrote songs that were catchy and hook-heavy, politically informed without being in-your-face, and unlike anything youāll hear on indie radio these days?

I caught D.C. hopefuls Exit Clovās live show at the Roxy in L.A. not too long ago, and despite my musical cynicism, damn if I wasnāt foot-tapping, head bopping, and humming along with everybody else in the room. Itās not just that Exit Clov write infectious grooves, itās the type of music theyāre putting out. Part hard rock, part new wave, part classical, and part something else entirely, their sound is hard to classify. So, when I recommended them to a skeptical buddy, he wanted to know, “Who do they sound like?” I was hard-pressed to answerā“RageAgainstStereolabChiliPeppersKrzysztofPenderecki” doesnāt exactly roll off the tongue.

Fronted by diminutive twin sisters Emily and Susan Hsu (pronounced “shoe”), Exit Clov formed, as so many groups do, from the wreckage of previous bands. The boys were looking for a new sound and a new singer, the girls showed up, and voila! Thatās the short version, anyway. Oh, and in case you were wondering, Emily told me the bandās name is taken from “a stage direction from a Samuel Beckett play called Endgame. Clov, the main character always says heās going to leave, but never does. So the name Exit Clov sort of signifies: āOkay, do what you say youāre going to do.ā”

As part of their recent cross-country tour, Exit Clov played a couple of shows in my hometown, the fair city of Los Angeles. Starting off with songs from their new EP, Respond Respond, and moving into some of their older material, the band impressed throughout the show with their musicianship and polish. Especially formidable was their management of multiple instruments and sound effects, without creating a lot of audio clutter. Theyāre a five piece, but up on that stage they sounded like ten. Drummer John Thayer kept things at a steady bop while the girls rocked everything from keyboards to cowbells (which my good friend Bruce Dickinson tells me is the key to musical success). Meanwhile lead guitarist Aaron Leeder played havoc with more effects pedals than Tom Morello, and bass player Brett Niederman threw down hits that damn near overpowered the sound engineer. And despite the girls switching instruments (sometimes mid-song), each number went off like a well-oiled rifle. Impressive, but not surprising since, according to Emily, Exit Clove practices “a ton.” “Compared to other bands,” she said, “itās important for us to keep our musicianship up to a high standard.”

On the other hand, for all their polish and gleam, the band failed to engage the audience on the level that theyāll have to if they want to break through as a powerful live act. Sure, the crowd wasnāt huge, but itās crucial for a rock band, however burgeoning, to connect on a visceral level with whatever audience itās got. While there was plenty of semi-interested toe-tapping and head-bobbing, Exit Clov never

seemed to grab the whole attention of anyone apart from those of us there specifically to see them. Perhaps itās merely a question of building up the live-show rapport that comes with experience (or perhaps the teensy stage they played on didnāt allow for much in the way of thrashing), but the band would benefit from some more good olā getting down.

The biggest disappointment, thoughāand the biggest compliment I can giveāwas that the bandās set was too short. We got a (too brief) taste of Exit Clovās original material, sure, but some covers, for example, mightāve been nice to hear. Emily told me that the band has done versions of Blondieās “Call Me” (my favorite Blondie tune, as it happens), and a couple other songs. Given how smart and musically challenging their original material is, itād be a thrill to hear Exit Clov interpret somebody elseās stuff. So, if you get to see them in your town, be sure to yell out some requests.

And thatās really the bottom line: if you do get the chance to see these guys perform (covers or otherwise), donāt miss it. They may not ever make it to the infernal halls of TRL, but Exit Clov is a band doing something right with music, not just something easy and marketable. Theyāre not out to make some academic point about rock ānā rollāor slap you with some Zack de la Rocha political messageāeither. Theyāre just playing genuinely thoughtful, thoroughly accessible, fun pop music. If a jaded-as-hell Slant critic like me can be pleasantly surprised, why not you, our jaded-as-hell readers?

The Quarry Review: A Love Letter to ā80s Horror That Lives and Dies by the QTE

We use cookies on our website to give you the most relevant experience by remembering your preferences and repeat visits. By clicking āAcceptā, you consent to the use of ALL the cookies.
Cookie settingsACCEPT
Manage consent