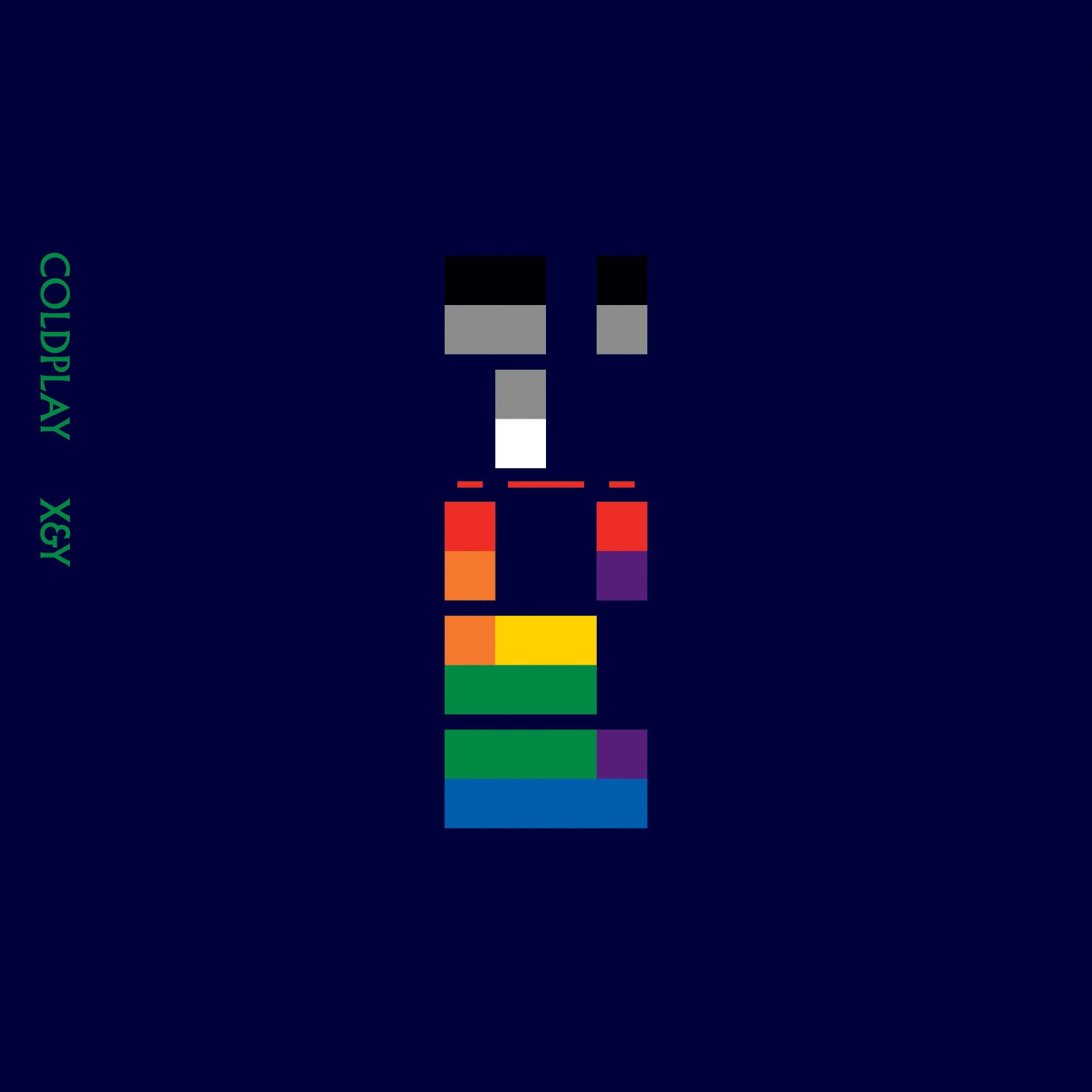 The pre-release press infinitely more interesting to engage than the album itself, the dilemma of being both Coldplay and their latest album, X&Y, is best summarized by how they’re written about. Here is a band whose record company publicly blamed them and their delayed album release for the entire recording industry’s slumping sales, a band burdened with the expectation of exclusively carrying mainstream rock music’s forward momentum for the next decade after only their sophomore album…and even the glowing, would-be rabble-rousing reviews read like form letters. What the music industry really means when it tells Coldplay— and the PR reps given the relatively thankless job of writing their press releases—that they’re the band that “everyone can and will like” is that someone ran a focus group wherein Coldplay’s music was the consensus choice as the least offensive. That Coldplay’s music—X&Y, in particular—can be marketed more or less like the latest combination of the same six ingredients Taco Bell has thrown together is a vote of no-confidence in the music on X&Y. People who don’t know any better and are either too busy, too distracted, too lazy, too indifferent, or too disengaged to question the marketing may mistake the Club Chalupa for legitimate Mexican cuisine. They’ll buy it, whether or not they feel strongly about it either way. So, too, will the flyover folks buy X&Y.

Artistically, it’s an unfortunate position, of course, but it isn’t difficult to see how Coldplay managed to arrive there. From the hummable-Radiohead of their debut, Parachutes, which revisionist history now states spawned more than one hit single, Coldplay made an actual, accomplished step forward on their follow-up, A Rush Of Blood To The Head. The album was anchored by several strong singles, the best of which suggested that Coldplay might be capable of producing something truly exceptional at some point in its career, and it was fleshed out by the kind of soundalike filler that’s easily mistaken for thematic coherence. The album, unsurprisingly, was both a critical and commercial hit as a result. And there were elements on both albums, moreso on A Rush Of Blood To The Head, fully deserving of the praise and commercial success the band received: the structurally brilliant ballad “The Scientist,” for instance, or the ubiquitous piano hook from the Grammy-endorsed “Clocks.” At times, Coldplay’s material found a comfortable middle-ground between the epic guitar-pop of Radiohead’s early work and the enormity of sound that led to the first of those now inescapable U2 comparisons.

From a marketing standpoint, then, it makes sense to push Coldplay as strongly as the suits at Capitol Records have over the months leading up to the release of X&Y. When Radiohead first threatened to turn into the standard-bearer for mainstream rock, they launched into the heavily experimental second half of their career, making them too odd to mass market. Wilco never had a monomial genre, so they were out. The Strokes were too independently wealthy for broad appeal. The White Stripes were and still are too limited by Jack White’s authenticity fetish and focus too much of their energy on building an artistic mythology. Franz Ferdinand had the misfortune of landing in a generation too self-conscious to embrace fun. Sleater-Kinney had the more grave misfortune of boasting an all-female line-up. Coldplay emerged as the ideal fallback artist, the easiest sell.

X&Y is the band’s first album recorded within that context. It’s to the band’s credit that they didn’t take the most obvious available route and record a self-pitying perils-of-fame album. But that credit doesn’t in any way make the album good, and it certainly doesn’t outweigh the discredit X&Y accrues for its fundamental safety and its adherence to an aggressively middlebrow formula for success. For all the time spent ruminating on fixing things over the course of X&Y—as on the title track and the simpering “Fix You,” the kind of sentiment emotionally stunted men mistake for openness when, in reality, it’s more closely aligned with sleaze—Chris Martin and his band apparently devoted precious little time to addressing their own weaknesses.

Coldplay’s greatest flaw is that, much of the time, they’re a case study in parts that outweigh the whole. That piano hook from “Clocks” was exceptional, the kind of pop-song composition that demands a melodic line and a lyric of comparable quality; the single offered neither. It’s telling of what’s wrong with X&Y that its lead single, “Speed Of Sound,” is but a diminished return on “Clocks” and is indicative of how the new, lofty expectations likely shaped the album. The piano hook on “Speed Of Sound” is engaging enough, but it’s also too familiar to qualify as anything more than treaded water, and neither the song’s lyrics nor its melody compensate for the lack of structural novelty. It’s Coldplay’s existing formula nudged closer to the midline.

Elsewhere, there’s nothing to match the propulsive melody of “Yellow,” the spark and passion of “Politik,” the structural sophistication of “The Scientist,” or the fully developed minimalist tone-poetry of “Trouble.” But there are approximations, some successful and some less so, for each. What’s most disappointing about X&Y is that few of these approximations work in tandem. As was the case on their prior outings, the high points occur in isolation, but this time those high points are of significantly reduced magnitude, which only serves to emphasize the songs’ and the band’s shortcomings.

“Talk” is given one of the album’s most memorable melodies, but its impact is reduced by the song’s structure, in which the lead guitar echoes Martin’s vocal melody after every line, so that melody becomes tiresome well before the first chorus hits. And it’s in both micro and macro structures that X&Y is something of a regression for Coldplay; the album’s 12 tracks alternate evenly between uptempo tracks and ballads, and the songs themselves rarely stray from a verse-chorus-verse, “ABABB” structure. Since simple pattern recognition plays a major subconscious role in the way people develop favorable preferences, the incessant alternations of X&Y strikes as a shrewdly calculated decision. And no, there isn’t a thematic point to the “X” and “Y” bifurcation of the songs, short of how each X could be replaced with its corresponding Y without anyone ever noticing the difference.

Lyrics have rarely been Martin’s strong suit—though he has a legion of fans who will each and every one insist that he wrote a song for them, personally, and it was called yellow—but he’s especially off his A-game throughout X&Y. There’s very little pretense to his lyrics, God bless him, but he strives too often for ambiguity, forgetting that a song that could mean quite literally anything is ultimately a song that means nothing at all. Perhaps the worst offender is “Swallowed In The Sea,” which finds Martin emoting, “You cut me down a tree/And brought it back to me/And that’s what made me see/Where I was coming from,” to within an inch of his life, which seems a high price to pay for something both empty-headed and internally redundant besides.

X&Y promises to make it even easier to resent Coldplay’s success. By no measure is it a good album, let alone the foray into legend-in-the-making status it has been marketed as. But the album retains just enough of the band’s occasional flashes of innovation and spark from its earlier albums to perpetuate the lingering hope that they could someday put all the elements together into a phenomenal package. That those flashes are present in significantly diminished form on X&Y, however, results in an album that inspires indifference—there were some nice touches of electronica in the production on Dido’s No Angel, but who takes that album seriously now?—at a juncture when, for better or worse, people are obligated to have a strong opinion of the band. Hating Coldplay still seems mean—they’re just too deliberately inoffensive: In the album’s liner notes, they don’t insist that their fans visit the Amnesty International and Greenpeace websites, but ask that they have a look “if [they] get time”—but it would be far easier to be sympathetic toward the burden placed on Chris Martin’s shoulders if X&Y justified its blitzkrieg promotional campaign. It’s a sad state when something this slight is heralded as the high watermark for popular culture.