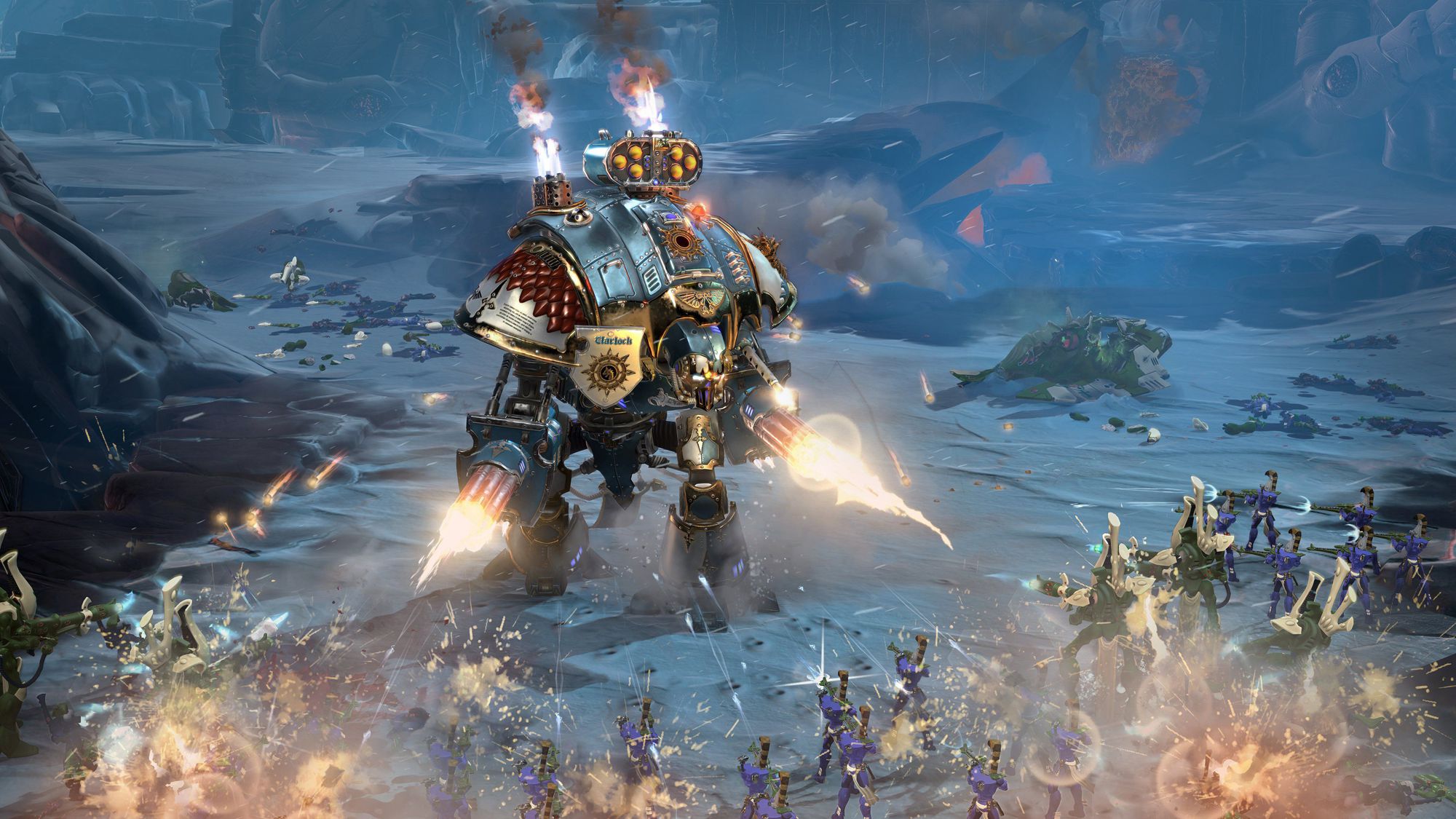 The rule of threes is an efficient storytelling device for those seeking to craft order out of chaos. For a real-time strategy game like Warhammer 40,000: Dawn of War III, which gets its thrills out of turning order into chaos, it’s not nearly as effective. Throughout its extremely uneven 17-mission campaign, the game swings from moments of absolute clarity and purposeful execution through a haphazard mashup of elements from the previous two entries until reaching a nadir of awkward and unresponsive controls. By the time players have unlocked all of the elite units for the three fighting factions—human Marines, savage Orks, and psychic Eldar—and their correspondingly wide variety of game-changing army doctrines, the skirmishes become unpredictable. This can be somewhat enjoyable when good decisions tilt the odds of this tough game in your favor, but it quickly grows infuriating when poor pre-match choices make Dawn of War III feel unwinnable.

As with the original Dawn of War, bases persistently accrue all the materials that you’ll need, keeping players on more or less equal footing while simultaneously urging them to fight early and often to control the limited additional resource points found on each map. There’s also a clever split between the costs of unit types, with light infantry and melee troops leaning toward Requisition points, whereas upgrades and heavy armor/vehicles are often paid for with Power. However, this leaves players with little room to adapt mid-game; a failing strategy is likely to grow even worse without access to some of the more expensive, bespoke units.

By way of compromise, Dawn of War III introduces a new type of Elite units, three (out of nine per race) that can be selected and brought into any skirmish. Unlike regular soldiers, which serve largely as fodder, these game-changing champions can only be purchased by earning Elite Points over the course of an entire match. The longer you hold out with just the so-called “line” units, figuring out how to best use patches of reinforced cover, stealth units, and a mix of long- and short-range firepower, the more likely you’ll be to afford the most expensive (and powerful) of Elites.

Here, too, is where the deep layers of meta-gaming are most apparent and effective. An ordinary marine, for instance, can wield either a short-range, crowd-controlling flamethrower or a long-range plasma rifle meant for single targets. Those who last long enough to deploy the Venerable Dreadnought, however, will find that those plasma rifles no longer overheat. Highwater and tide-turning marks like these make the game seem like Go to the Chess of StarCraft II and Checkers of Command and Conquer.

Dawn of War III rarely strikes a good balance between the original Dawn of War’s base-building and Dawn of War II’s tactics; at best, it almost feels like two separate games depending on whether you’re playing defense or offense. The solo campaign exacerbates this sense of imbalance with its structure, and also remains stubbornly linear, too busy explaining its unique mechanics to allow for much freedom in their use. These small doses of strategy don’t fix the game’s problems so much as they temporarily break its clutter into semi-coherent chunks. There’s too much to control throughout Dawn of War III, especially in boss fights in which players are expected to dodge projectiles or kite the adds (additional reinforcements); there’s a reason why World of Warcraft splits important tasks across more than one player.

As if to add to that chaos, the single-player campaign keeps shifting POVs. No sooner have you gotten the hang of the way in which Orks grow more powerful by looting pieces of scrap from the battlefield than you’ll have to master the way in which the Eldar literally creep toward victory, teleporting their base structures closer and closer to the frontlines.

Confusion advocates comfort, not experimentation, which means that these jarring shifts end up encouraging players to default toward the strategies suggested by the initial deployment of buildings and units. This is a tactic that’s also followed by the weak narrative, as there’s no real development of the scheming Ork warboss Gorgutz, loyal Blood Raven soldier Gabriel Angelos, or the rebellious Eldar Farseer Macha. This is a sad compromise for series newcomers who may be unfamiliar with those characters, as it benefits nobody to see these heroes so emotionally minimized in their single-minded pursuit of a powerful artifact. This plot, like its heroes and like the game, performs dutifully at best, leaving it to the players to figure out how to pick up all those scattered pieces and make something more of it.