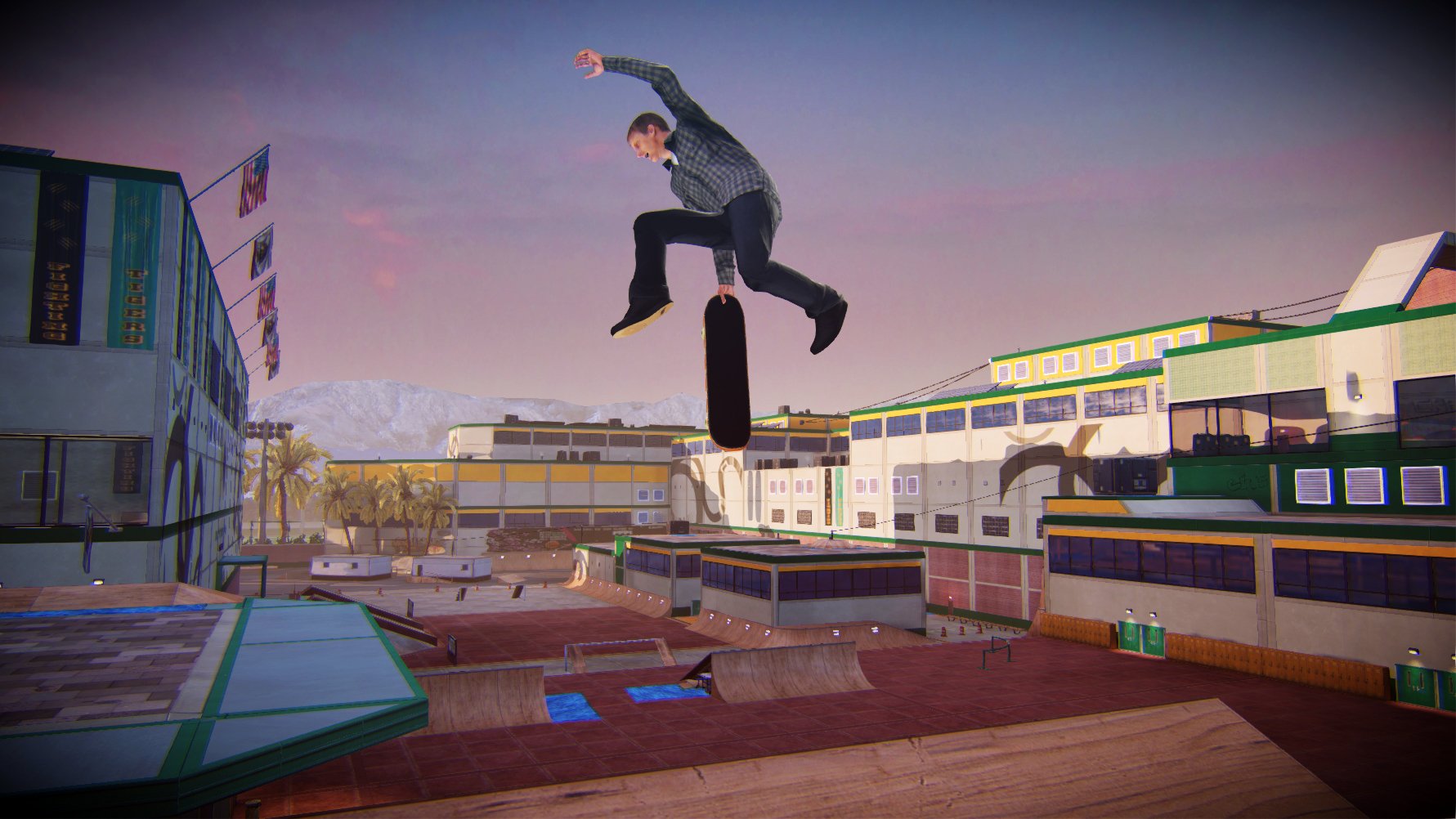 Grasping for any remaining strands of nostalgia surrounding Tony Hawk’s Pro Skater, which remains an outlandish and masterfully designed skateboarding experience, Robomodo’s Activision-mandated update paradoxically misses the point entirely. With functionally identical game mechanics and decent level design working in concert to promote continual trick combos that lead effortlessly from one element to the next, Robomodo most often challenges players, strangely, not to score big, but stupidly: to collect scattered doodads, smash inflatables out of pools, and literally jump through hoops. Pro Skater’s mechanical core has always been limited and binary (simple button combinations to grab, flip, grind, manual, ollie), and it’s perfect in its limitation, but it was never designed with this nonsense in mind.

Put to proper use, the simple mechanics can prove as deep as ever: New players can have fun instantly, and there’s also a rewarding experience for the steadfast player who attempts the demanding “pro” challenges unlocked after completing the frustratingly mundane non-challenges. That is, if the game’s instability and poor art direction don’t keep the player from calling it quits. The camera often disorientingly stutters and shakes rapidly, and sometimes the skater randomly detaches from rails during a grind.

The graphics attempt a flat, comic art style, and it looks great on the bonus character, King, from the recent King’s Quest, but the rest of the game tries to ride the line between realistic and stylized, and the blurred flatness only ends up suggesting a PlayStation 2 game. The bugs and ugly graphics undoubtedly hurt the experience, but even so, the base mechanics make room for new players to deepen their skills with practice and experimentation.

Yet, slowly building this learned mastery is the same fun we’ve been having since the original Pro Skater in 1999. This one is numbered “5,” as it’s the fifth game in the series to bear the “Pro Skater” moniker, but it’s actually the 10th designed in the vein of the original. There are more Super Mario Bros. games, yes, but each one redefines what it means to play as the famous plumber. Nintendo throws away power-ups, refines the jump, and invents new places to explore in the Mushroom Kingdom. Sure, mechanics have been added to the Pro Skater formula over time, but the core has remained unchanged. How many nearly identical iterations is Activision willing to produce before destroying its own credibility? How many are we willing to put up with?

In the face of this history of stagnation, Robomodo’s new campaign-integrated multiplayer is refreshing. The communal effect of 19 other players skating around in free skate between challenges makes the world feel alive, especially in comparison to the droves of twitchy NPC skaters from the series’s past. Player-created levels can also be shared online, but the square, flat constraints of the park creator have always seemed to stunt the execution of good ideas. The crowd of online skateboarders auto-injected into the levels is a step of unexpected evolution in the right direction, but everything else here has either stayed the same or regressed. Neversoft, now defunct after releasing a Tony Hawk game every year from 1999 to 2007, was slow to evolve the series as well, but one can only assume the studio is rolling in its grave, afraid of what direction, or lack thereof, their baby will be taken next.