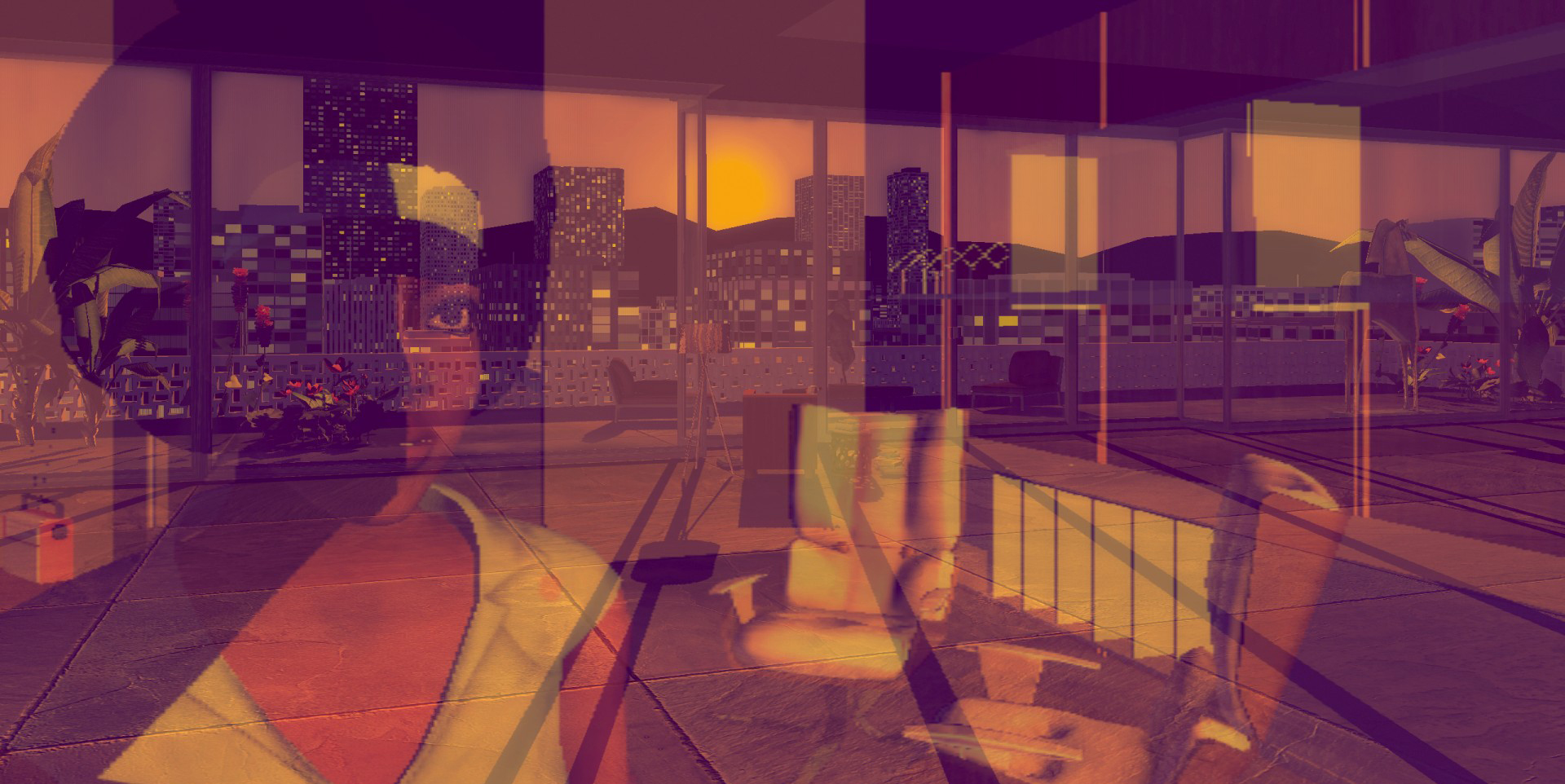 Sunset is a year in the life of Angela Burnes. In the summer of 1972, unable to escape the fictional South American locale of San Bavon, Anchuria, which is gripped by violent political revolution, Burnes takes a part-time job as housekeeper in the swanky penthouse apartment of a mysterious government official, Gabriel Ortega. In the polished steel of the elevator that opens the game, you can catch a glimpse of her blurred, flat-mouthed reflection. It’s terribly disconnecting to housekeep and pick up after an employer with whom the only point of contact is a to-do list, and after several weekly visits to an apartment devoid of other life, one starts to empathize with Burnes’s blank expression.

But behind her stiffly rendered visage there’s a fire burning. Her brother is involved in the revolution, and from the bits picked up around the house, her employer seems to be as well, though on which side is impossible to tell. This intrigue, exposited by Burnes voice and journals, is the driving force behind Sunset. Every week on the ride up the elevator, Burnes moves the story forward with strongly performed monologues. Over the year’s weeks, one can hear the concern for her brother’s safety rise and eventually turn to desperation. Her journals, however, aren’t delivered to the player automatically.

To make the words flow, one has to sit Burnes down in a particular chair that’s moved around the house each week. In a handwritten cadence, the words overlay the view from the seat, each one accompanied by the small sound of scuffed paper. Taken with the outrage, confusion, and personality of the elevator monologues, these raw, personal entries give us a richer sense of Burnes’s psyche. And the whole compels one to hear out the next week of Burnes’s situation and inner demons, even if it means doing a few chores. Thus, after the elevator door opens, and the light of the titular timeframe beautifully paints the modern apartment in warm and soft pinks, oranges, and purples, the drive of the game becomes not cleaning better than last week, but finding the chair of Angela’s diary. But don’t forget: As the housekeeper Angela Burnes, you have work to do!

At first, the necessity of housekeeping seems regimented like this. But, smartly, the weeks go on no matter how many or few to-dos are completed, forcing the player to live with the judgment of a potentially disappointed employer. And as the story unfolds, priorities change, both for Burnes and the player, and how the two intermingle and clash is Sunset’s most tangible accomplishment. When Ortega’s integrity is thrown into question, is it Burnes or the player that chooses to let the to-dos slide? Which is it that takes a break from the monotony by putting a record on? Sometimes it feels right to reinforce what you think Burnes is feeling, sometimes to do what you want―giving Burnes your position in the process. Completing a task is only a matter of finding the thing in the apartment and clicking it. It’s a terribly mechanical design, and the process of merely playing is, at times, glitchy and shaky. But the experience of Sunset is role-playing that goes both ways. And it’s rich.