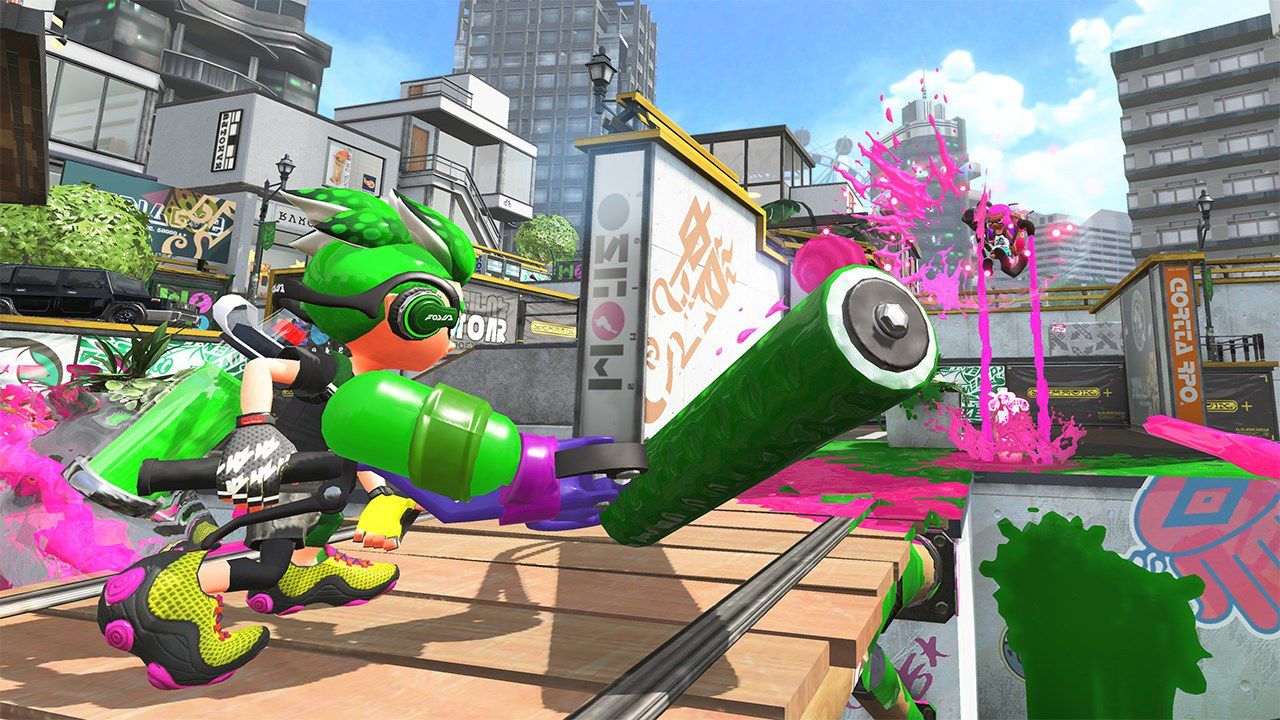 Like the first Splatoon, Nintendo’s sequel to their smash hit isn’t your average multiplayer online shooter. You play as an inkling, a humanoid/squid hybrid that uses different items, like guns and rollers, to spread colored ink on the ground and other surroundings. The primary competitive mode is Turf War, a four-on-four battle where the goal is to spread more of your team’s ink on the environment before the clock runs out. As in other shooters, players can take each other out with weapons, and the fallen must leave the battle temporarily before being re-spawned at a starting point, but dispatching opponents won’t win the match if a team loses sight of the ultimate goal of splatting ink everywhere as quickly as possible.

Splatoon 2 offers other multiplayer modes, including a new Salmon Run challenge in which players work together to advance through waves of enemies. (Unfortunately, I couldn’t get an online Salmon Run match to occur at the time of this review.) But the primary components of play are the same: Spread ink all around the playing field and shift from human to squid form to swim through the right-colored ink, an action that makes for faster travel, enables defensive options, refills your ink bar, and allows you to reach new areas. There’s something uniquely appealing about the rhythm of transforming from one body type to another at critical moments, and the motion-control aiming (which can be turned off) is suitable for the twitchy reactions of players as they dive in and out of ink-covered areas.

Deciding which weapons and armor you will utilize throughout is another appealing aspect of Splatoon 2. Each weapon has its own strengths and super moves, and each kind of attire comes with bonuses, such as faster movement in squid form or more disposable ink. The possibilities are quite varied and thus make team play fairly dynamic in that you don’t know what bells and whistles opponents will exploit at any given moment.

The catch is that equipment must be unlocked through leveling up (more points are given when your team wins a match) and buying items at a shop, which can only be reached by exiting the online lobby and walking your character across a puny hub. In Splatoon 2, as in the original, having to gain levels feels like the result of Nintendo deliberately throwing in an RPG-like element into the game experience in order to extend playtime. More preferable would have been to make all weapons and armor available at the start of the game in order to reward strategic thinking and skill immediately and make battles more fascinating in general. This more open approach would also have made the shop unnecessary and thus reduced the amount of time a player has to spend with menus and the game’s garrulous merchant.

Perhaps Nintendo includes the busywork of a leveling system to distract players from the fact that they’re limited to playing on a paltry number of maps for arbitrary periods of time. In any case, the developer could have made a better game if it had increased the variety of environments one might interact in within a given slot of time. Theoretically, you can break up the repetition of the same old maps by checking out Splatoon 2’s single-player mode, but completing that campaign is more of a foregone conclusion than a challenge given the frequent checkpoints and tutorial-heavy narration. When it comes down to it, there are too many things Nintendo could have cut from Splatoon 2 to turn it into a faster, more furious, and more focused game.