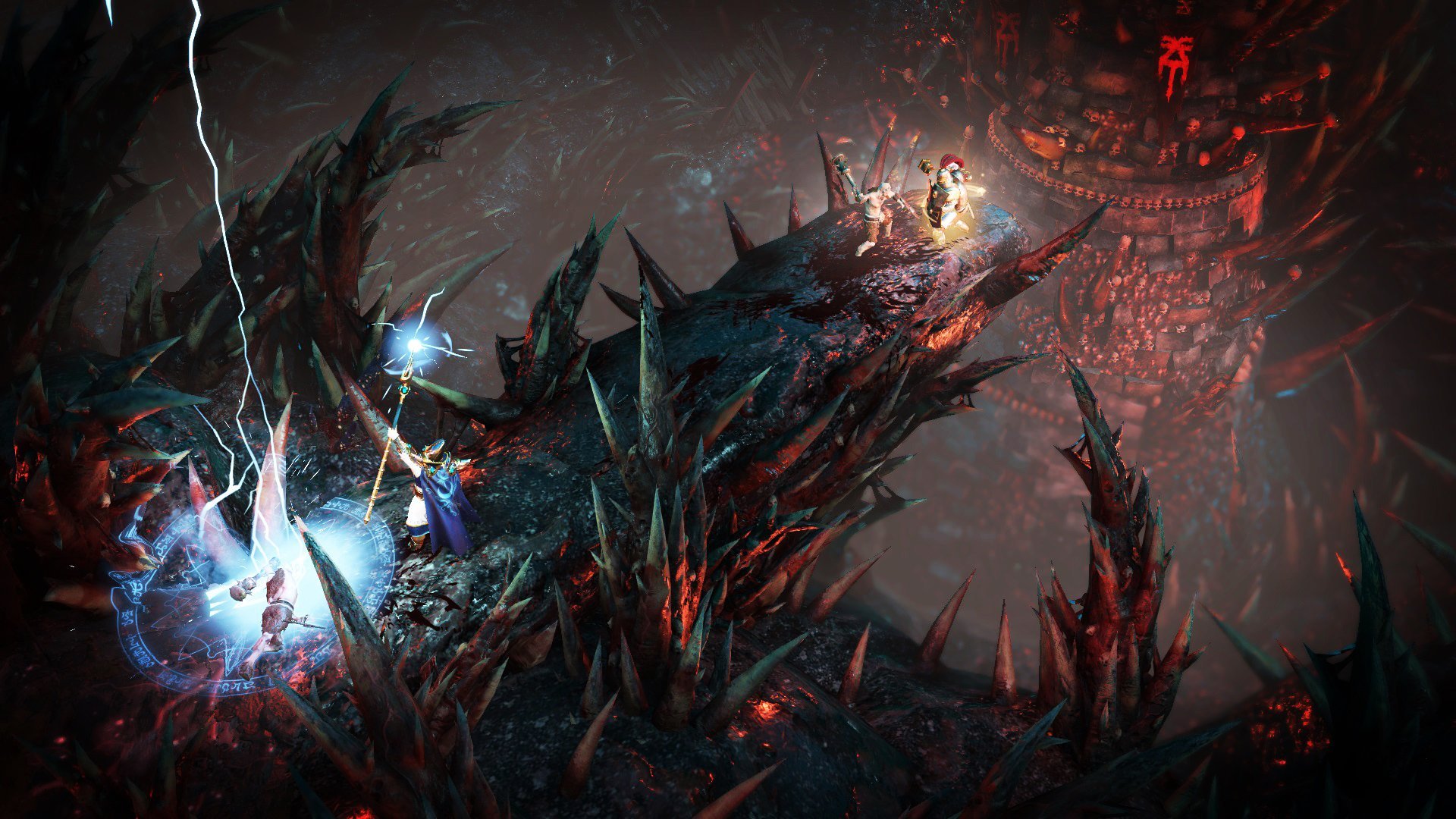 The opening cinematic for Warhammer: Chaosbane sets the tone for the game that follows. The series of crudely animated storyboard sketches describe a rather generic massive-scale war that’s just been concluded against the forces of Chaos and how your chosen protagonist bravely helped Commander Magnus to victory. What follows isn’t a hack-and-slash dungeon-crawler so much as a hack-and-slack time-killer, one that pales in comparison to the game that Chaosbane fruitlessly emulates: Diablo.

Chaosbane’s squandered potential is most evident in how the game mishandles its four selectable characters. Elessa, a wood-elf archer, is meant to use poisons and traps to keep enemies at bay, but those skills are never needed, as the game’s witless AI hordes are only too happy to serve as stationary targets for her arrows. The dwarven Bragi Axebiter uses a chain axe to grapple into foes, since his rage-based mechanic relies upon constantly hitting things, so it’s odd that many dungeons are filled with long, empty corridors that drain his rage meter. Konrad Vollen, a shield-bearing soldier gains extra strength when taunting or being swarmed by enemies, and yet outside of the co-op campaign, he seems rather listless, his status-boosting AOE banners largely going to waste. And then there’s the high-elf mage Elontir, who’s impossibly complicated to handle in the solo campaign. Indeed, the joy of finely controlling his spells is lost in the hectic rush of constantly teleporting away from foes.

The first few dungeons showcase Bigben Interactive’s latest at its best, as they at least offer the illusion of depth and variety. You’ll move from the green-hued sewers beneath Nuln to the ramparts above, and then through the grim, gray-hewn streets of the ravaged fortress city, all the while learning exciting new moves. (Never mind that the characters seem to have inexplicably forgotten all their heroic skills from that introductory cutscene.) But should you decide you don’t like Bragi’s fast-paced dual-wielding axes and want to shift to Konrad’s slower, more methodical sword-and-shield bashing, you’ll have to begin a whole new campaign, and it’s here that the game’s non-randomized levels come dully into view.

Even if you never restart and choose to stick with a single character, the rewards are quickly diminishing. You’ll revisit slightly different areas of Nuln’s sewers and streets throughout the first chapter, fighting, for the most part, the same types of monsters: some sort of swarmer, some sort of tank, a ranged unit, and perhaps a mounted creature. Your hero, limited to a single weapon type, only ever minimally upgrades his or her loot, and of those 14 active abilities and countless passives to equip, only a few builds seem viable or interesting.

The game’s main campaign is relentlessly repetitious. Dungeons are straightforward affairs, mostly linear corridors that are occasionally pockmarked with a treasure-filled cul de sac, though they offer no optional objectives or lore. There are no side quests, no interactions with townsfolk, not even a shop. There are only five or six NPCs, all of whom give the same fetch-quest variations, only with slightly different accents, and ultimately, whether they send you to the frosty trees of the Forest of Knives or the floating stone bridges of the Chaos Realm, the result is always exactly the same. While Chaosbane abounds in colorful background details—toothy red maws pressing out of the earth, tentacles flailing far beneath you—the game would have been better served by bringing more hazards to the actual forefront, so as to break up the monotony of just how easy it is to vanquish your enemies.

Even the few inventive stretches of the game are ultimately driven into the ground by that sense of repetition. Chaosbane’s four bosses are its strongest feature, given that they possess unique mechanics that you must learn to strategically overcome, from dodging a bullet-hell attack to baiting a laser away from the pillars that you’ll later need as cover. But replaying these encounters in Boss Rush mode quickly blunts the excitement of learning boss patterns, making these encounters as rote as any other enemy in the game. Increasing the difficulty simply allows enemies to hit harder and absorb more damage, which makes the game longer, not harder, and the post-game Relic Hunt mode’s random enemy modifiers do little to change this. To put it lightly, it’s a case in which nothing is adventured, and nothing is gained.

This game was reviewed using a download code provided by HomeRun PR.

Review: Pathologic 2 Bears Witness to the Enormity of a Town’s Suffering

Neon White Review: A Heavenly Speedrunner That Let’s You Get Your Parkour On