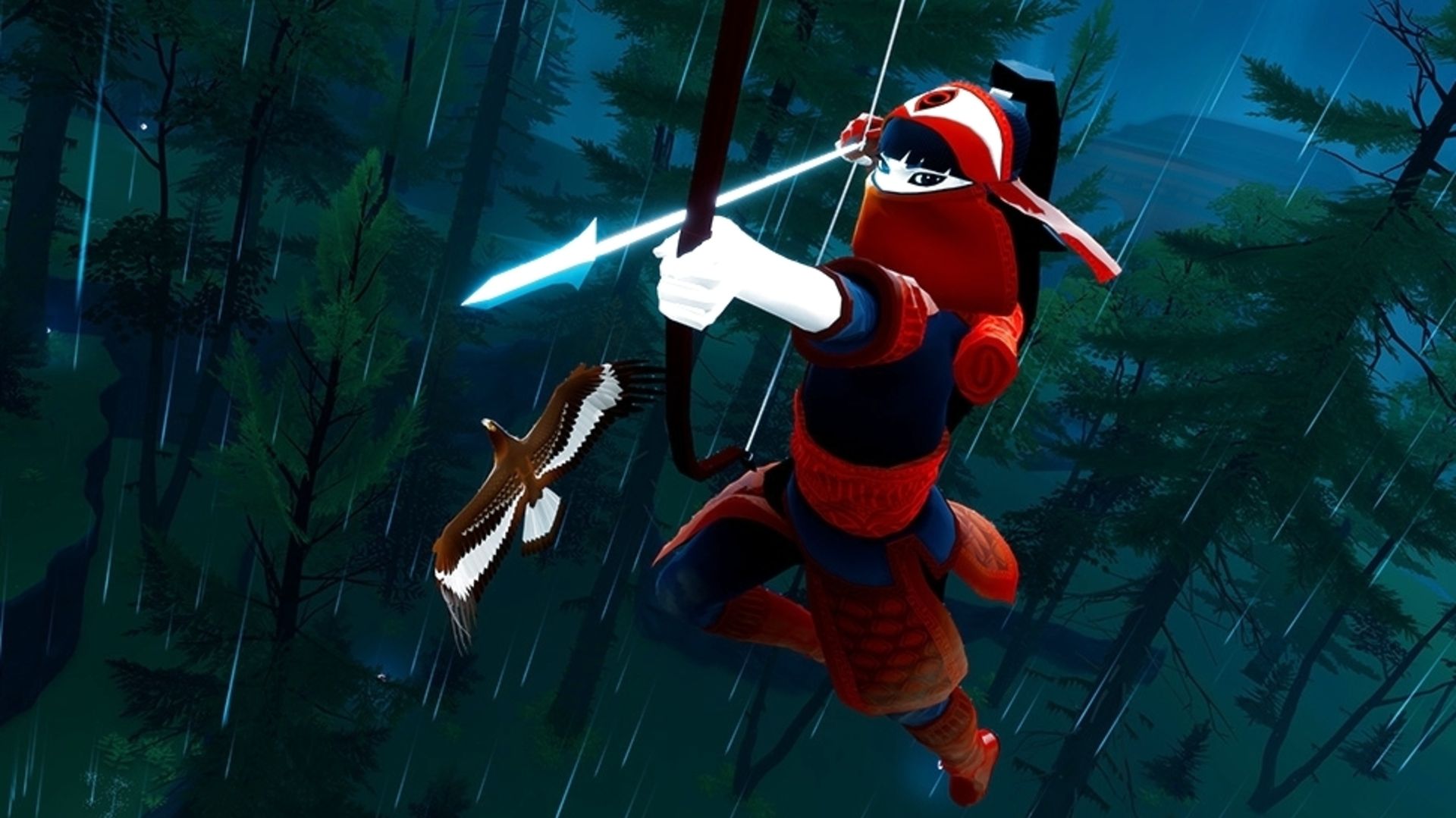 There’s something almost defiant about how prototypical and familiar The Pathless is, treading as it does territory worn not only by Shadow of the Colossus and The Legend of Zelda, but the countless other media they’ve likewise inspired, to say nothing of further forbearers like Hayao Miyazaki’s Princess Mononoke. That familiarity suggests an intent to transcend the thick muck of video game cliché in which The Pathless stands, and what’s most disappointing is that the game almost manages to do so.

The forces of light and darkness are at it again in Giant Squid’s open-world game. The Hunter has traveled to a distant land where the requisite giant animal deities have been cursed and struck down. To put things right again with nature and the world at large, she must cleanse the cursed gods and switch off the radiating red towers that look like the Eye of Sauron.

The game’s unique movement system provides a magnificent sense of momentum. Armed with a bow, the Hunter sprints across the world while shooting floating talismans that replenish an ever-draining dash meter. Aiming is more or less automatic; all you have to do is look in the direction of a talisman and hold down the trigger for a brief lock-on period. As you get a feel for how long it takes to shoot and how quickly arrows reach their targets, navigation becomes a captivating rhythm that frees space for you to experiment with different maneuvers, weaving through trees or hopping over rocks and rivers while expertly aiming without a hitch.

Complementing this freedom of movement is your eagle companion, who can soar to great heights or carry you across gaps and long distances. Sometimes a river is a little wider than your jump distance, so the eagle can carry you the rest of the way. But some of The Pathless’s most thrilling moments occur when you cross areas without the eagle’s aid. For one, if you hit a talisman in midair, the boost keeps you aloft and provides just enough push to jump a wide river. Mastering the navigation means blazing through the world at high speed, able to propel yourself across the landscape while scarcely touching the ground.

Otherwise, the bow tends to be used in the puzzles that dot the landscape. And, unfortunately, those puzzles are pretty standard stuff, from lighting a torch by shooting an arrow through some fire, to hitting a switch from a distance, to, if you really want to get wild, weighing down a pressure plate. But what the puzzles lack in distinction they make up for in a fulfilling sense of discovery when you find them on your own. They’re nestled inside the trees and the ruins that might catch your eye from a distance, rewarding you with light orbs that are used for markedly less inspiring means: turning off the video game towers to unlock the boss battle.

In each area, a cursed god roams the land within an enormous storm, a swirling cloud of ominous red that occasionally expands to pull you inside for rather tedious stealth segments. While it’s possible to outrun these storms, they tend to interrupt puzzles and exemplify the odd identity crisis at the core of The Pathless. The game visibly aches to be more traditionally dramatic, which manifests in more guided stretches like the stealth sections and boss battles.

And when The Pathless doesn’t lean on the sense of discovery that so few games trust the player with, its most familiar attributes become almost laughable because there’s no longer anything to differentiate them from those of countless other games. It’s then that it becomes yet another game where you have to shoot giant eyeballs, light torches, and look around in bog-standard blue vision to highlight relevant objects while making dark clouds go away. In the wrong hands, the wonder-of-nature, light-in-the-darkness archetypes merely become another flavor of generic. The Pathless ultimately buries anything it might have to say in a stupefying level of cliché, grasping for profundity in the shadow of the things that inspired it.