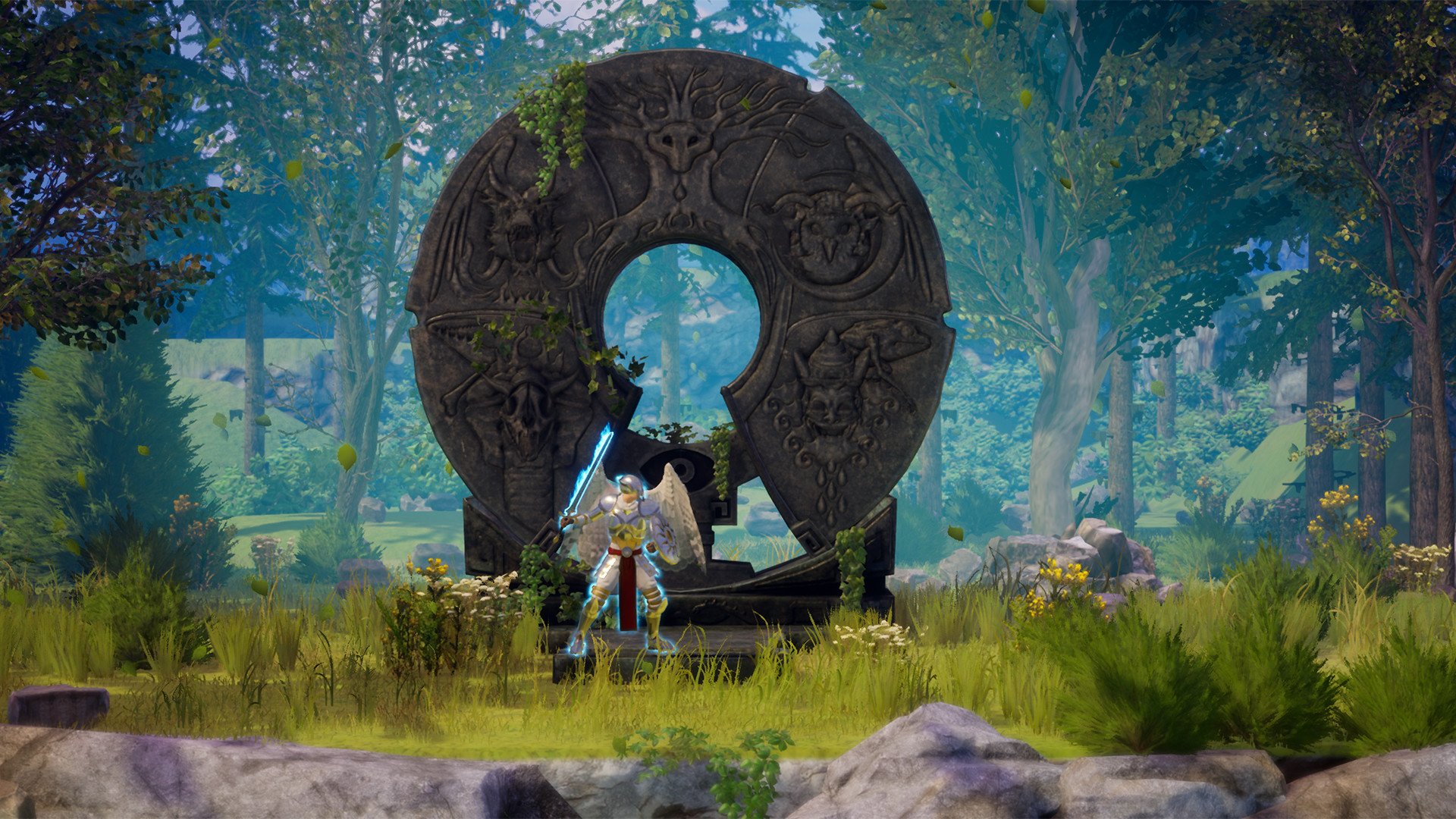 Some time ago in the shallow world of ACE Team’s SolSeraph, Sky Father and Earth Mother drove back Chaos and created the Earth, before then vanishing from the planet, no longer directly meddling in the ways of mankind. But the void they left behind was soon filled by the Younger Gods of flooding, famine, and the like, who took it upon themselves to torment our nascent humanity. It’s finally left to the winged half-god, half-man Helios to defend mankind. Right out of the gate, the similarities between SolSeraph and the decades-old classic ActRaiser are unmistakable, right down to the hybrid action/strategy gameplay, but it’s an empty emulation, a joyless facsimile that lacks a single spark of innovation.

SolSeraph boasts five essentially identical biomes. Entering a region requires players to clear a menial combat section and to perhaps platform their way over a few bottomless chasms. After doing so, they’ll take an angel’s-eye view of a village and issue orders to the helpless human inhabitants who know how to forage and fight but would never think to do so without godly assistance. Periodically, as a town survives enemy waves and builds temples, monster lairs are unlocked: short combat arenas that Helios fights his way through. Finally, after clearing all of these, players can face off against the region’s animal-themed boss.

The game offers an insultingly reductive mix of resource management and tower defense. There are two types of food-producing buildings, one that increases population, and one for harvesting wood. They can be instantly demolished for a full refund of workers and wood and almost as quickly rebuilt, so there are never any shortages, and no long-term consequences for poor planning. Likewise, there are but four defensive structures: melee barracks, ranged archery towers, a laser-shooting magical hut, and a crowd-controlling bomb-shack.

Helios is known as the Father of Forethought, so perhaps the dearth of strategic options available throughout SolSeraph is an inside joke, albeit a poor one, on ACE Team’s part. After all, the demons are so monomaniacally fixated on snuffing out your central bonfire that they march right past all your other vulnerable structures. This allows players to forget their measly four tactical options, or the range-, damage-, and speed-amplifying dwellings. You can win simply by lining the road with archery towers. For even less of a challenge, players can divinely intervene, using Helios to summon thunderbolts and sun spirits.

That you only ever need to use about half of the buildings or skills exposes the game’s emptiness. Some structures are introduced with a one-note mechanic, like wells, which you can build in every level but are only required for the Sekh Desert, where they turn inhospitable sands into arable farmland. These tools also sometimes fly in the face of narrative sense: You can’t build farms in the Vale of Yeg, as it’s too cold there, but you can depend on livestock for sustenance, which may lead you to wonder what exactly your animals eat. After a while, it feels as if the game’s environmental challenges exist only to mask the tedious repetition of each level, and given how the problems you run across are so easily addressed (bridges and boats are automatically built for you) or beside the point (the Arunan Isles occasionally and briefly flood without affecting gameplay), they ultimately feel entirely cosmetic.

This same redundancy spills over into the combat sections of SolSeraph. You climb the trees of the Plains of Widhu as you do the cliffs of Mount Agnir, and every area has some kind of spider, flying bat, and club-wielding monster. Two of the bosses—a snowy owl and fiery dragon—fly about, but you can otherwise just stand next to all of them, hacking away. (Outside of a healing spell, Helios’s magic is superfluous.)

Even the game’s plot is redundant. Each village is led by a different elder, but they all offer similar platitudes about the various forms of faith and mankind’s resilience, things that the game’s active sequences consistently rebuke. There’s no insight to be gleaned here, and no meaningful interaction beyond clicking on the campfire to hear more dialogue. Helios may protect mankind’s free will and creativity, but he appears to have none of his own.

The game was reviewed using a review code provided by Sega.

Review: Judgment, Though Too Reticent, Is a Worthy Yakuza Spin-Off