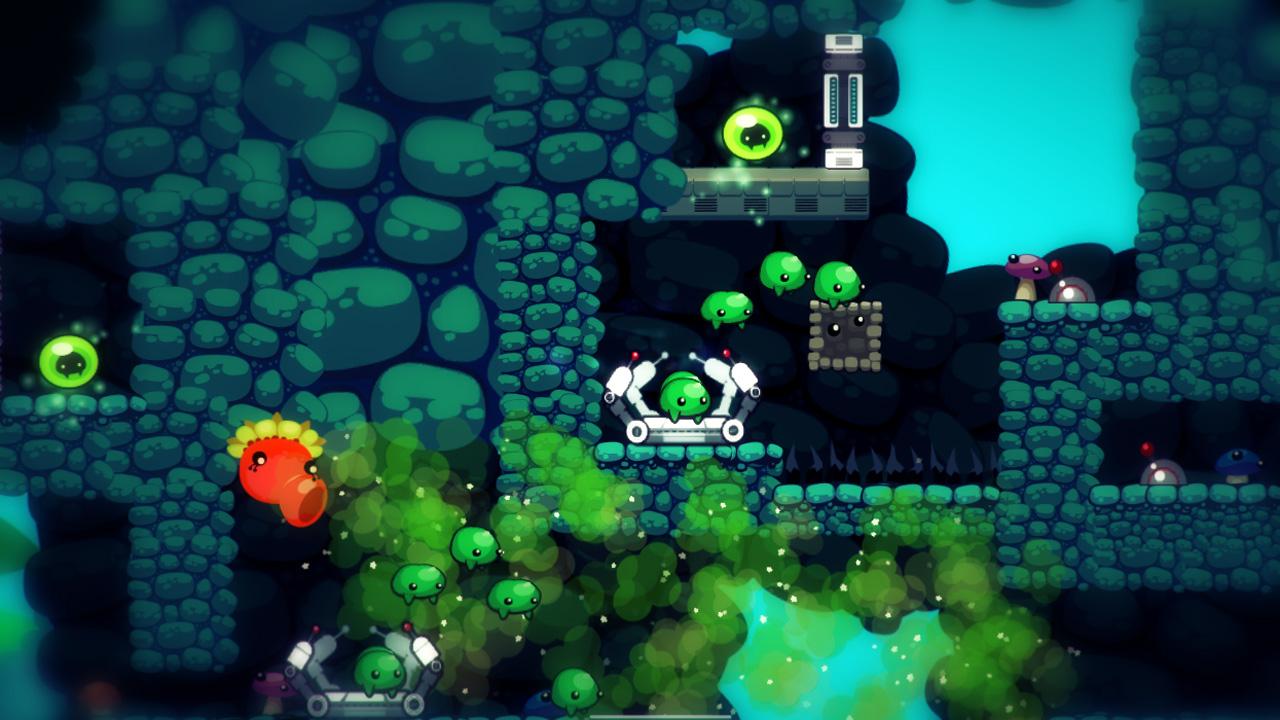 There’s a very fine line between having too much and so much of a good thing, and the clone-filled So Many Me is determined to live on that edge. Deceptively cute, at least until the game gets one of its many spike-lined hooks into you, its 50 levels are bursting at the seams with the sort of perplexing puzzles and perilous platforming that make for great ad copy—at least until they grow taxingly lengthy and get weighed down by wonky controls that stand in the way of execution. (And that’s ignoring the stray accidental solution, in which a glitch allows you to shortcut through a zone.) In terms of polish on an indie game, So Many Me is somewhere between Ethan: Meteor Hunter and Battleblock Theater, but these frustrations keep the game’s heroic green blob from being the next Kirby.

Thankfully, the majority of the fiendishly troubling parts in So Many Me are optional: You don’t have to collect the hidden costumes or the relic recipes/ingredients, and the checkpoint-free levels within the Chrono Castle are a masochist’s end-game treat. Instead, players can focus on Filo’s quest to free his Fountain of Life-spawned clones, with each new acquisition serving not only as a customizable companion, but as a literal stepping stone toward victory—i.e., they can be transformed into blocks that Filo can climb atop. The most recently placed copy is always the first one you retrieve, which seems like a simple enough mechanic (a refined version of the one in Blocks That Matter), but simultaneously swapping your “me” while using them to hurdle through the air requires precise controls that aren’t always there. When time becomes a factor, as with the volcanic final boss, So Many Me can start to feel so unfair.

Each zone further introduces a different transmutation fruit, with advanced puzzles testing your ability to combine properties. For instance, one turns a clone into an enemy-distracting yellow moon, while another turns your partner into a red trampoline so that you can reach that foe. (A Boy and His Blob springs to mind.) What keeps So Many Me from feeling overstuffed is that it’s entirely fair in teaching you how these skills work. You begin each area alone (with only Filo) and reach your maximum capacity of eight “me” only upon reaching the boss; along the way, you’ll figure out how to, say, redirect the power-crippling poisons of a Fume Bloom, or how to activate a gene splicer in order to morph into a singular beast, like the barrier-breaking Jellosaur or the rocket-launching Jellophant tank.

Whether it’s the overwhelming cuteness, the diverse collection of abilities, the relaxing soundtrack, or the self-aware script (“How cliché and yet super exciting!” says Filo, blindly leaping into the quest), So Many Me stands out in the crowded subgenre of puzzle platformers. The developers at Extend Studio have done their eugenics homework, and nobody can accuse them of building a mere clone.

So Many Me is now available from ORiGO GAMES. To purchase it, click here.