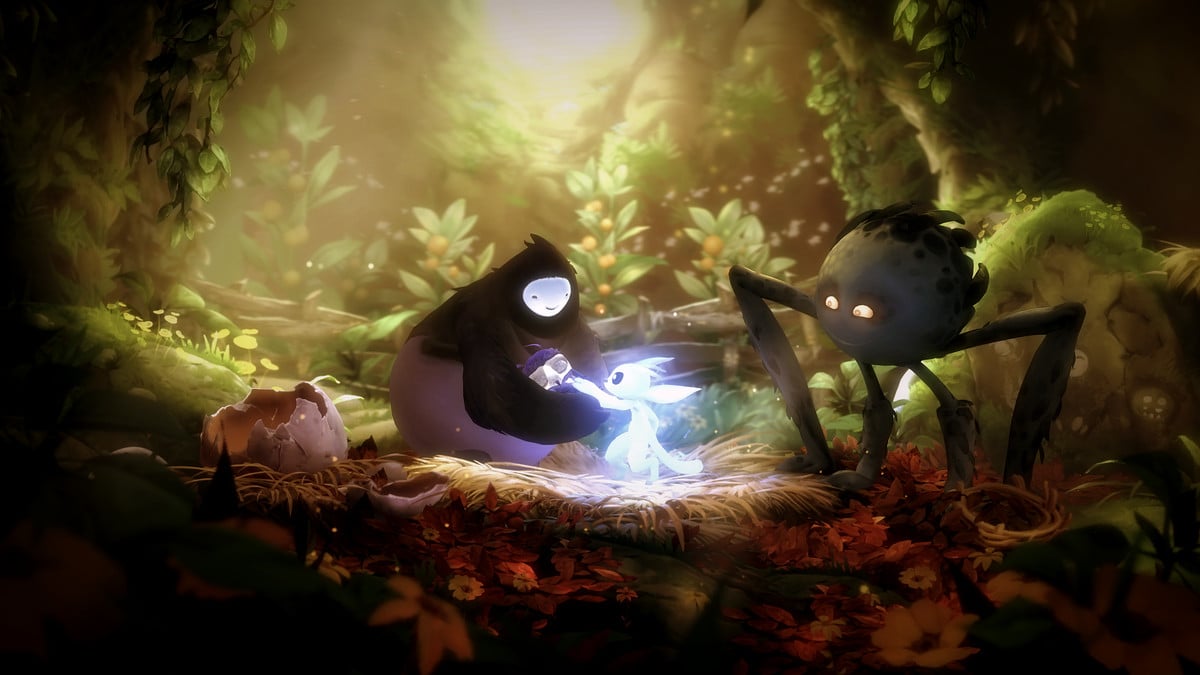 Moon Studio’s Ori and the Will of the Wisps is as comforting as it is challenging. Every inch of the game is suffused with calming details, from the soothing orchestral score to the painterly 2D environments, which use layering techniques to bring background elements to life, like the sun dappling gently through a copse of trees and the animals scurrying about. You’ll often die, but you won’t feel too discouraged at any point, as the frequent, automatic checkpoints ensure that you’ll never lose too much progress. Even the plot, which repeats some of the same beats as Ori and the Blind Forest, feels reassuring. It suggests that Ori will be able to do for the corrupting blight of neighboring Niwen what he once did for his home of Nibel, and that he’ll be able to reach the same amicable resolution with Shriek, this game’s new avian antagonist, that he did with Blind Forest’s angry Kuro.

Will of the Wisps improves upon Blind Forest, and finds new ways to demonstrate their shared eco-friendly themes. Not only are there countless NPCs to talk to, purchase items from, and go on sidequests for, there’s a hub area called the Wellspring Glades that you can help rebuild by gathering ore and seeds. These optional collectibles serve no practical purpose during gameplay, though there are health- and magic-boosting orbs that boost survivability and spirit shards that aid with accessibility by reducing (or increasing) damage and allowing Ori to stick to walls. But the sidequests on behalf of the feline Mokis and simian Gorleks are a vital experience, given the way the game gets you to emotionally invest in restoring the land. Even the inventory screen feeds into this, as it looks like a hollowed-out tree that becomes festooned with glowing orbs each time you fulfill a character’s request or recover a new item.

The game’s first act features levels, like the stormswept Inkwater Marsh and the mossy Kwolok’s Hollow, that recall several from Blind Forest, but beyond that, each area features distinct visuals and organic puzzles. For instance, the Luma Pools are brightly Seussian, filled with tufts of pink grass and floating bubbles that propel you through the air. And within the terrifying Mouldwood Depths, where you chase fireflies through pitch-black chittering caverns, you come to realize that walls are throbbing because they’re made of the cobwebbed bodies of crickets. Each new area also offers an upgrade that keeps the game’s exploration fresh and ever-evolving, as there’s always some different way to across an area, from burrowing through sand like a turbocharged worm to rocketing out of water like a flying fish.

The only place where Will of the Wisps feels contrived is in its combat. Where skirmishes were largely secondary to the overall experience of playing Blind Forest, with escape sequences filling in for traditional climactic showdowns and the majority of fights either avoidable or accomplished at range, Will of the Wisps makes combat a more central component. This would be fine if the more melee-based battles and the increased number of areas in which you must fight were as inventive as the platforming, but it’s often just mash-happy pap wherein you have to kill everything in a room in order to progress. The boss designs for a corrupted wolf, beetle, frog, spider, and owl are meticulously detailed, especially in the ways in which each shows different signs of the Decay that has infected the land, but the battles against them feel repetitive and dull. Though Ori gains many magical attacks ranging from fiery bursts to explosive spears, all that’s required is to simply jump into the air and swing away.

Will of the Wisps begins with Ori attempting to help his new friend, Ku, an owlet, learn to fly. Ori, who has no wings, teaches by constantly finding ways to stay aloft, and by the end of the game, players will rarely touch the ground as they string together moves, such as a wall jump, into a bashing carom off an enemy projectile and, then, an air-dash toward a lantern that can be grappled. The fluidity of this ballistic and balletic gameplay helps to set Will of the Wisps apart from other platformers. But those are just mechanics. It’s the love Ori shows for Ku, and vice versa, that distinguishes Will of the Wisps from almost every other game on the market.

The game was reviewed using a review code provided by Assembly.

Review: With Persona 5 Royal, a Masterful Game Rises to Greatness