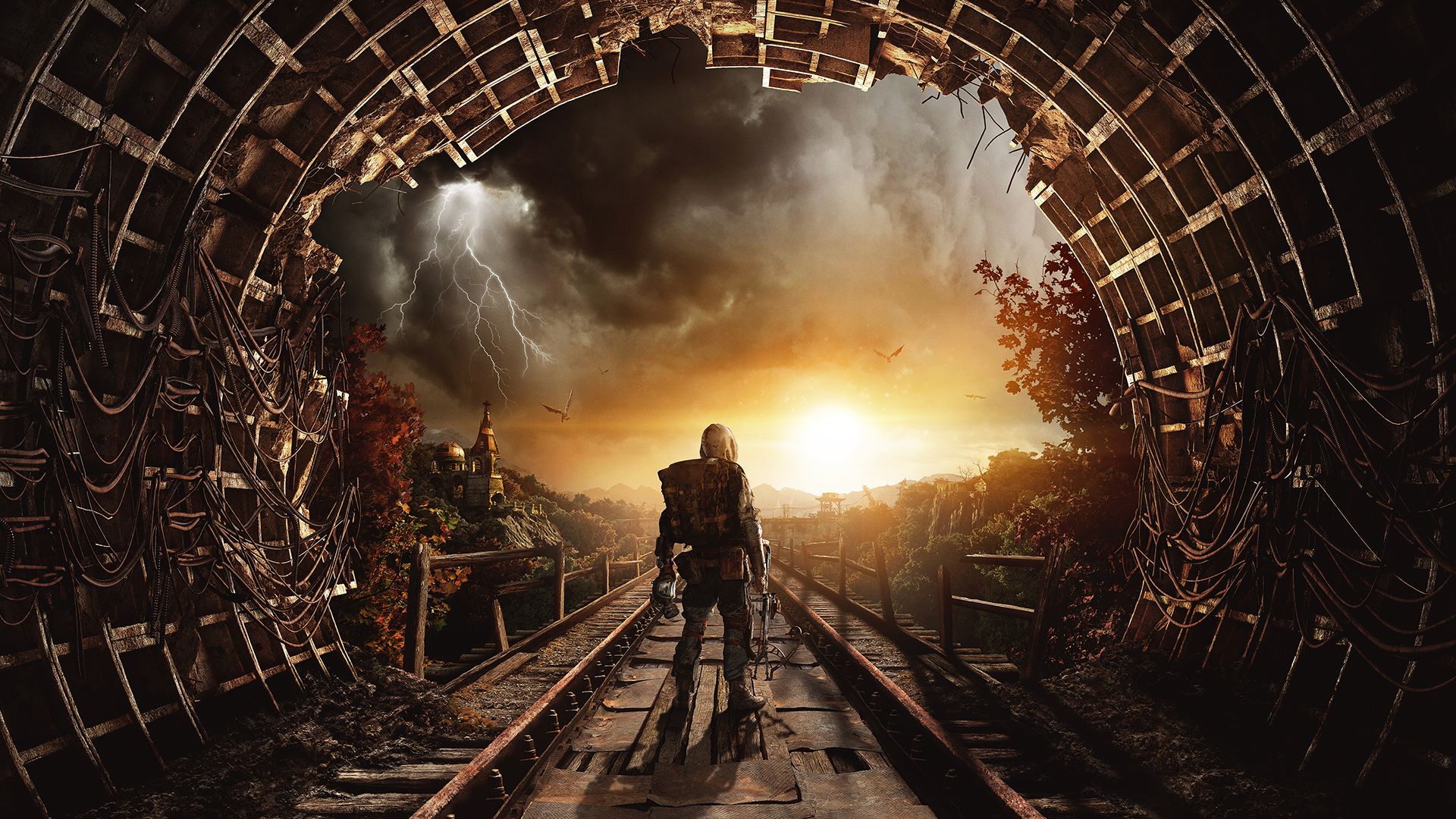 Previous Metro games found texture through their limited scope. As seen through the eyes of Russian soldier Artyom, people in the subway tunnels beneath an irradiated Moscow cobbled society back together from the ruins of the old world while dealing with mutants, sickness, and rival factions built on all-too-familiar forms of extremism. 4A Games’s epic Metro: Exodus expands the series beyond those familiar claustrophobic tunnels, placing Artyom’s gaze firmly on the horizon as he and his companions journey across Russia by train, searching for a new home free from the ravages of humanity.

Appropriately, the game’s metaphor for its expanded world is to make parts of it literally open for the player. Artyom is now free to roam wide-open spaces—to peek into desolate houses for abandoned supplies and scout points of interest from a distance. All around you, mutants search for food, and bandits survey the wasteland from within ramshackle fortifications. The game is still driven by story segments, many of which fall back on the Metro series’s familiar brand of desperate survival horror; players creep around in the dark to conserve resources before a firefight breaks out or before massive spiders skitter through the rays of a draining flashlight. Other segments, though, take advantage of the world’s openness by providing multiple routes to do things like infiltrate a train yard, one of which might bypass a cluster of zombie-like humanoids entirely or drop Artyom right into their toxic nest.

The series is, as always, evocative in its atmosphere and the interactions it affords the player, such as allowing you to wipe the condensation off your gas mask with a press of a button. And Exodus’s open areas only enhance this specific sense of place. They even carry the occasional emergent thrill, like stranding you in a rowboat while a winged demon dives from overhead, forcing you to paddle to safety on land and take refuge in what turns out to be a populated bandit camp with a towering mutant shrimp in pursuit. But Exodus struggles to incentivize exploration of its world. You grow accustomed to the rusted, landlocked boats and the anonymous houses that dot the landscape and contain, if you’re lucky, an audio diary or a new attachment for the game’s robust weapon customization system. Most of the time, though, you’ll just find the same crafting materials when you explore the wasteland.

Unlike many crafting systems, Exodus’s never has you create anything new so much as replace what you’ve used up: things like bullets, gas mask filters, and medkits consumed either in missions or, paradoxically, in the very act of scavenging materials. When playing with some measure of stealth (which the game encourages) and keeping an eye out for materials on the way to (as well as during) missions, you’ll rarely struggle with the resource scarcity that might actually require a risky journey out into the world. Exodus is most successful elsewhere, in one forested area that provides an open-ended approach to a fixed destination. Its environments and encounters are more authored than the bland open world, and its scavenging is purposeful because it’s the only way to prepare for the encounters ahead.

The game’s open world feels like little more than overly elaborate wrapper for an underwhelming story that loses much of its drama to an awkwardly silent protagonist. Though Artyom narrates loading screens, he expresses himself in-game primarily by waving his hands around, as if miming because no one can hear him under a gas mask. His wife and his other companions refer to character traits we never see, alleged goals and ambitions conspicuously jammed into lengthy dialogue sequences. He’s supposed to be a dreamer. For one, the idea of a world beyond the metro is Artyom’s, yet none of that passion or hope ever comes through.

Not that the game thinks much of those apparent hopes, of course. The series’s typically dim view of humanity is on full display for much of Exodus’s length, as Artyom and his companions encounter terrible new societies birthed in distant parts of Russia. The game depicts people as easily subjugated when society breaks down, clinging to whatever is offered to them. Despots prey on desperation and fear, offering hope through perversions of community, religion, or protection. Violent forces upend what seem to be safe havens.

Exodus’s sweeping critique of humanity is practically nuance-free. Here, dissent among followers is rare, cultists are unquestioning fanatics, and cannibals screech “MEAT!” and jot the word down in unintentionally hilarious diary pages. Even slaves uniformly cower before their masters, weeping and begging for sympathy. Despite introducing an open world, the game is very much a forward journey, barely spending enough time in one place to inject any complexity to its exploration of how society claws its way back from the brink. You’ll hear the leaders of each group speak but seldom the people who follow them. They have no more voice than Artyom, no more interiority. Just as Artyom is essentially an anonymous pair of floating hands, the people that his party encounters often represent little more than simplistic avatars of a post-apocalyptic society gone mad. Exodus ultimately seems less interested in the process of how humanity breaks down than its grisly end results.

This game was reviewed using a download code provided by Tinsley PR.