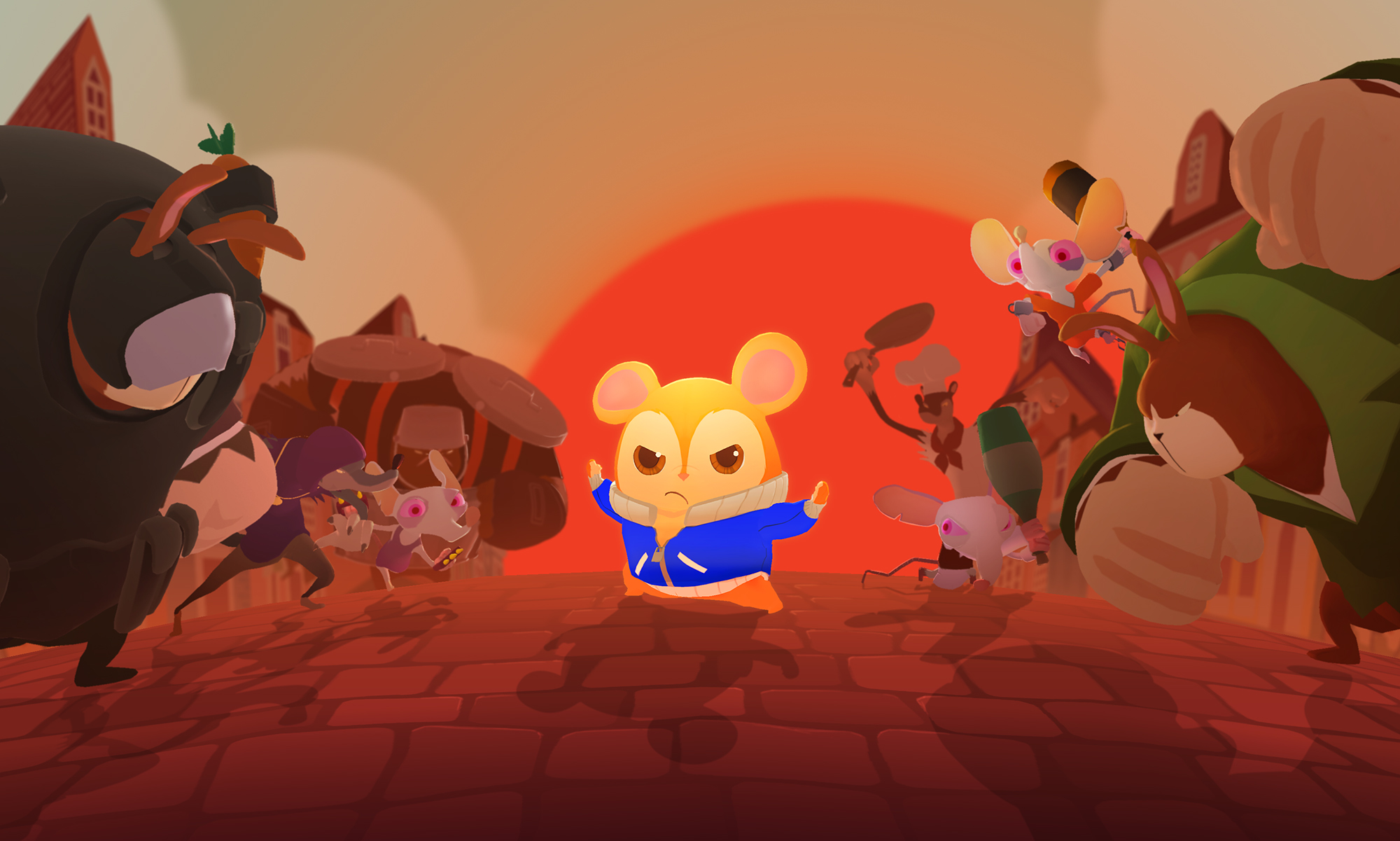 Hamsterdam’s narrative is the flimsiest of veils to propel the action forward. The game’s hero, Pimm, is a cute hamster who uses martial arts to save the city of Hamsterdam from the evil chinchilla Marlo. Using button, gesture, and touch controls, Pimm can attack, counter, and execute a special move once his K.O. meter is full. Throughout, you’ll spend many a level mash-attacking until the Rodent Gang—composed of mice, rabbits, and the like—is disbanded, and, no doubt, bemoaning how the game requires you to make little to no strategic maneuvers. It almost stings that the only means of increasing the game’s difficulty is by adding more enemies with larger health pools who are all functionally and visually the same.

In Hamsterdam, you’re able to execute a number of Hamster-fu techniques. The Charged attack, which is necessary to use later in the game, breaks the guard of shielded enemies, while the Perfect attack, just before a visible halo around Pimm dissipates, deals extra damage and more quickly fills your K.O. meter. Both techniques are useful for staggering enemies and causing them to drop health items—that is, if they actually worked as intended. Indeed, because Hamsterdam has issues recognizing your button inputs, it’s frustratingly common here for you to try an execute an attack only for Pimm to just stand around doing nothing.

As the game never really switches up its formula, it’s not long before fatigue sets in. Every level is identical to the last, with enemies appearing more or less where you expect. The only real visible changes Hamsterdam offers across its 30 or so levels are those found in the customization options for Pimm, the backgrounds, and the clothing worn by the Rodent Gang—and even those are just very minor color alterations. You’re liable to be struck by a palpable sense of déjà vu while button-mashing on the streets of Hamsterdam, illustrating that simplicity may be conducive to accessibility, but it’s also the quickest way to stoke boredom.

Don’t be fooled by the different colors that are meant to denote harder enemies and new levels, as there’s no disguising Hamsterdam’s ardent commitment to the blandness of its combat and world. Not only do enemies always appear to the right of Pimm, they just idly stand by, begging for a beating. Even the big skirmishes see little variance, with most bosses easily dispatched with just a few hits. Pimm may be cute, and he looks like he hits hard, but in action, Hamsterdam doesn’t convince us that there’s much power in his little paws.

The game was reviewed using a download code provided by Future Friends Games.

Review: Metal Wolf Chaos XD Plays Like a Vicious Indictment of Our Present

Review: In Wolfenstein: Cyberpilot, Killing Nazis Is a Robotic Affair