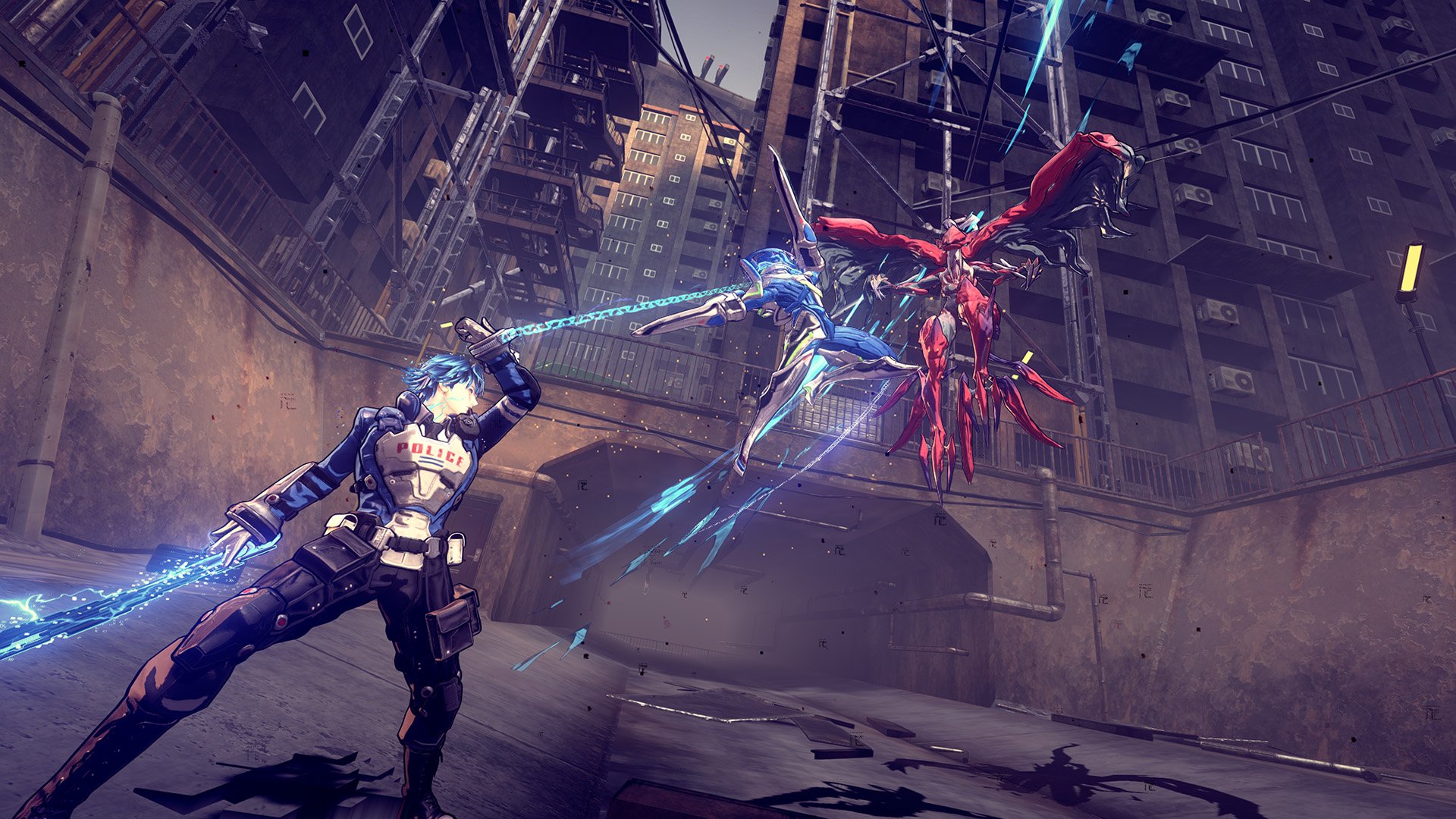 Platinum Games’s Astral Chain takes place in a post-apocalyptic future where much of the Earth is unlivable, and where what remains of humanity has huddled together inside a single megacity, the Ark. Which isn’t to say that life inside the Ark is safe, now that its citizens are being abducted or killed by interdimensional monstrosities called the Chimera. Which is where the city’s police force comes in. Its new sector, Neuron, seeks to combat the problem, and with a secret weapon that tethers police officers to a powerful half-breed Chimera known as Legion, harnessing each other’s powers and standing up against their common enemy. Throughout the game, you play as twin siblings—only one selectable and customizable at the outset—who seem to have a special connection with the Legion, and who’ve been reassigned to Neuron to help their police captain father fight the Chimera.

On paper, there’s complexity to be mined out of that premise, and the game’s world is striking enough to deserve it. Especially of note is the nightmare realm the Chimera call home, a dominion of shifting landscapes and foreboding architecture. In execution, though, Astral Chain’s narrative and design are rather juvenile. That’s to be expected considering how much of the game’s tone and aesthetic is informed by modern anime, particularly evident in the characters and secondary missions outside of the main plot. Still, it’s a genial and generally good-natured derivativeness, and the story isn’t without its occasional surprises and affecting character beats. Ironically, the weakest part of the game is the plot, which amounts to fairly typical “I will create the ultimate being” nonsense that isn’t connected to the characters in any meaningful way. It also doesn’t help that whichever version of the protagonist you choose is silenced for the rest of the game while the NPC sibling gets all the best dialogue.

Once you’re out in the field, however, things are decidedly less simple. Where NieR Automata went out of its way to delineate its styles of play throughout, Astral Chain is a wildly ambitious shotgun blast of concepts centered around the idea of having a companion constantly tethered to the player. Platinum’s deceptively simple button-masher mechanics are inextricably tied to the Legions, as the vicious biomechanical beasts are literally fused to your right arm. Combat and traversal require a sort of mental rewiring on the player’s part, because you have to think of yourself not as one person, but two, and work in synergy to do absolutely anything of note. Doing the most damage involves hitting a specific QTE prompt to command your Legion to get involved in the action. Obstacles may force you to yank yourself around corners where your Legion is waiting. The most unruly enemies will require being bound by the titular chain, with both your characters circling or clotheslining an attacker.

This isn’t the first game to try out something like this; most notably, Brothers: A Tale of Two Sons laid out a dual narrative using a single controller with subtle craftsmanship. Combat and traversal in Astral Chain dance astonishingly hand in hand, but it’s a dance that the Switch’s Joy-Cons can barely contain, and often don’t. Fighting with your Legion is fluid enough, though a few of the secondary attacks for each Legion type—which you will need to execute on the fly during heavy fighting—require you to stop, stand still, take aim and slash/fire. The Switch’s controls are highly versatile, and the gyro sensors picking up a bit of slack with the aiming helps, but there’s limits to that versatility before it becomes straight-up clumsy.

Still, any one of your powers with the Legions would be enough to anchor an entire game, and there’s literally dozens of them at your command that come into play in and out of combat. Much of your time outside of fighting is spent doing honest-to-god detective work, gathering clues, talking to citizens, and making conclusions, using most of those same mechanics to solve cases. A hellhound Legion can sniff out a perp’s trail, and a Legion with massive arms can punch blocks to complete puzzles. Your analysis computer can access a police database to figure out someone’s age on the fly, or figure out if they’re lying. There are so many different styles of play and ways you can utilize the tools at your disposal, it’s a miracle that the game doesn’t collapse under its own weight. And yet, each of Astral Chain’s mechanics adheres to the guiding principle for many of the Switch’s best exclusives: If you ask if something is possible for you or your Legion to do in Astral Chain, most of the time, the answer is yes.

On its surface, Astral Chain feels like a regression back to the same old same old of lightning-fast chaotic combat and anime tropes. But that’s just a small aspect of a game that’s trying and largely succeeding at doing so much more. Astral Chain’s narrative is straightforward, but it’s one that’s enriched by alluring character moments. Early on, you’ll find yourself flailing and button-mashing everything around you, until you’ve figured out how to integrate your Legion into your routine. And if the game’s platforming feels obvious at first, the tricky discovery of a shortcut—a power-up, maybe even the best way to escape some of your larger enemies—will change your mind. Once Astral Chain moves past its opening, a literal anime intro complete with electronic J-pop theme song, it reveals that the powerful creativity that gave birth to NieR Automata is still alive and running rampant at Platinum Games.

The game was reviewed using a review code provided by Golin.

Review: In Blair Witch, There’s No Greater Horror than That of the Glitch