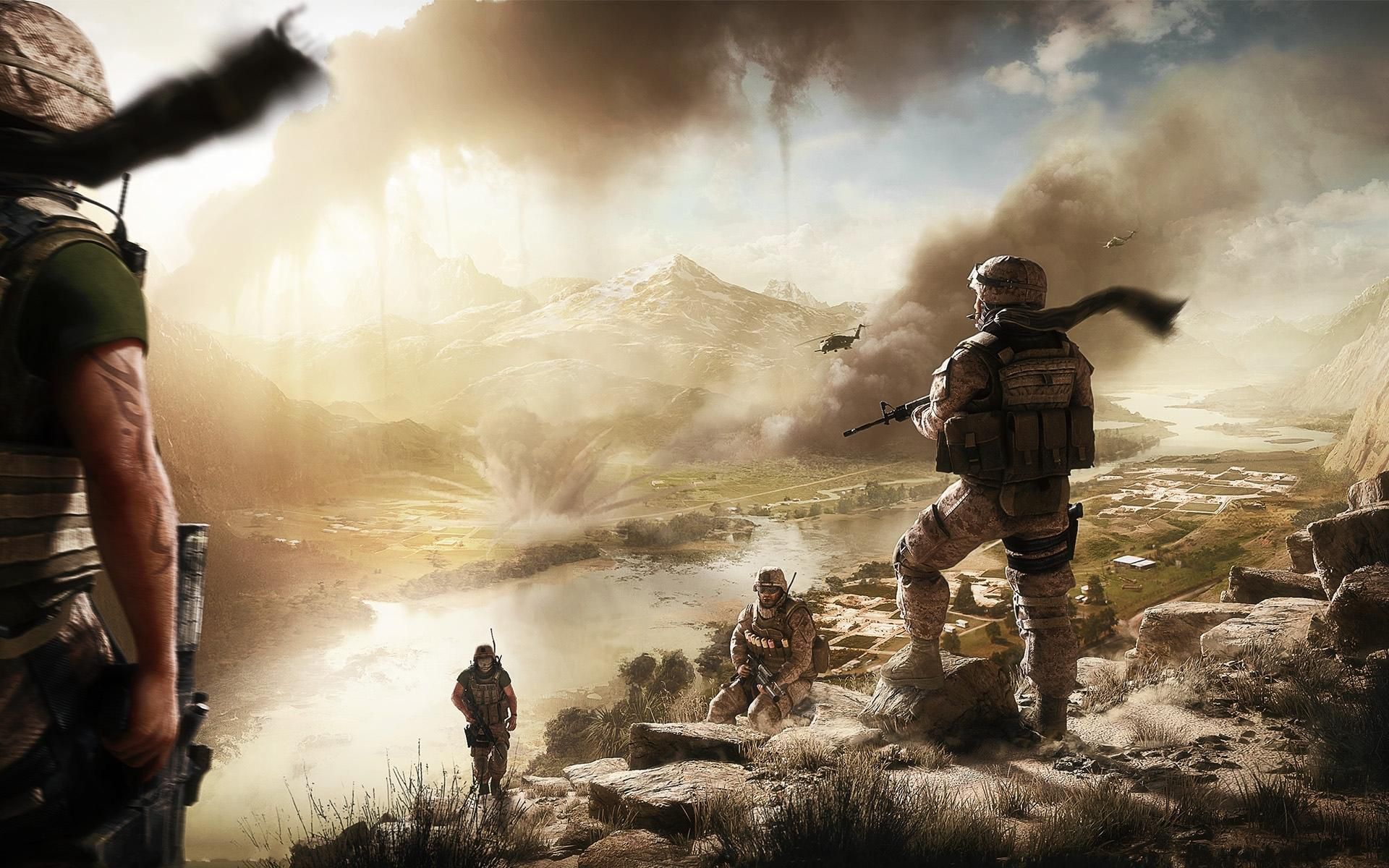 There’s something refreshing about Operation Flashpoint: Red River’s attempt to be innovative and relevant in a post-Modern Warfare world, toeing the line between the populist action blockbuster carved out by Call of Duty and the classic slow “realism”-focused niche that’s set Operation Flashpoint aside from most modern first-person shooters. Unfortunately, it’s a balance the game can’t sustain, with neither the meandering gameplay nor meaningless narrative satisfying across the roughly 12-hour campaign. This is a game that has little to say and takes a long time to say it.

A lengthy multimedia infographic reminiscent of a few Call of Duty games distils vital information about America’s involvement in Middle East conflict, including the unintentional birth of Osama bin Laden as the free world’s terrorist bogeyman, before putting the player in control of Outlaw 2 Bravo, a U.S. Marine Corps fireteam deployed to a fictional conflict just a few years into the future. Mortar attacks on a forward operating base in Afghanistan prompts retaliation with U.S. forces inserted into Tajikistan against the insurgent threat, first dealing with opposing forces in villages and airfields and then forced into guerrilla war against an uprising People’s Liberation Army from neighbouring China.

Missions are bookended by long scenes of travel, be it in jeeps or helicopters, listening to radio chatter or the directives by the profane commanding officer; shades of HBO’s phenomenal Generation Kill, adding to the authenticity of the experience, but not necessarily the enjoyment. Likewise, the gameplay positions the soldiers as fallible, destructible beings, steering clear of the regeneration health trope in favor of much more dire realistic survival conditions: When you’re shot, you die. Taking to any situation involves moving slowly, taking cover and watching closely for movement and potential attack. Beyond being the standard for the Operation Flashpoint series, you can read this as being smart commentary on modern war FPS over the harsh reality of such situations, but Infinity Ward’s fairly preposterous Modern Warfare games have already done this, and better, with the offhand dispatching of most of the protagonists—as both reward for aggressive Americana patriotism, or just for being unlucky enough to be in the wrong place, wrong time.

Red River’s attempt at realism doesn’t go far enough. Death isn’t meaningful as much as it’s annoying, as loading back into the last checkpoint takes a considerable amount of time and doesn’t have much of a standing on the current act or overall story. (Again, compare this to the affecting deaths across the Modern Warfare series.) Wounds can be dealt with on the battlefield with a quick patch job without further repercussions, and basically every character will make it through to the end game regardless of your actions. The mechanics of the campaign itself are equally unbalanced: Although there’s a focus on the slow, tense movement into enemy lines, they’re mixed in with plenty of over-the-top moments and scenarios that really don’t belong. In any hour of Red River, players will see more action than most of the troops deployed to the Middle East over the past two decades—to be expected in a video game, but it doesn’t sit right when compared to the realistic ambitions of the title.

The game also suffers from frequently dreadful AI: The threat of death in combat—or, in this case, a long loading time—is subdued as enemies flee toward the player with no regard for their safety, or run directly past soldiers without noticing them. Worse is that other members of Outlaw 2 Bravo have a tendency to go imbecilic, stepping out of cover to invite enemy fire and occasionally spinning around in a circle (the Kane & Lynch effect). For this reason it’s much preferable to take to the game co-operatively, with four-player co-op offered across the campaign, though played slowly enough Red River is equipped with a clever system for issuing squad orders that is, for the most, effective—just don’t let any of your soldiers off the leash.

Red River looks and plays considerably better on a PC, in part due to the console 720p resolution limitation that doesn’t gel with the long draw distance (far away humans are tiny dots), but still looks fine on consoles. It’s also not as difficult as other Operation Flashpoint games, which purists will see as a major sin, though it’s considerably more accessible than previous titles without sacrificing core challenge. Red River is still a hard game, and one that is punishing. For many players, this exasperating element combined with the slow pace will make the game undesirable, to which the game offers the additional fireteam missions, which are shorter, faster-paced, and feel more like a video game than the main campaign. This is a decent, competent supplement to the main game, but feels like an unnecessary compromise to the COD fraternity that Operation Flashpoint purists will find off-putting.

The same can be said of nearly the entirety of Red River. What could have been an authentic experience closer to Generation Kill feels like the muddled offspring of modern war-game tropes and Michael Bay bullshit with the traditional Operation Flashpoint series. It doesn’t fit. A completely unnecessary monologue closes the campaign with the kind of pathetic, reductionist American-bravado speech (usually reserved for the big CG robot pissing on a minority) that’s so simplistic and infantile it could pass for parody. (Best not to think about the ridiculous logistics of a small team of Marines facing off against hundreds of thousands of Chinese troops on their country’s border and somehow coming out on top.) Although I appreciate the attempt to do something different (and also the gamble of removing competitive multiplayer modes, something even single-player, story-based games tend to have forced into them nowadays), it’s a missed opportunity, and one that leaves a bad aftertaste.