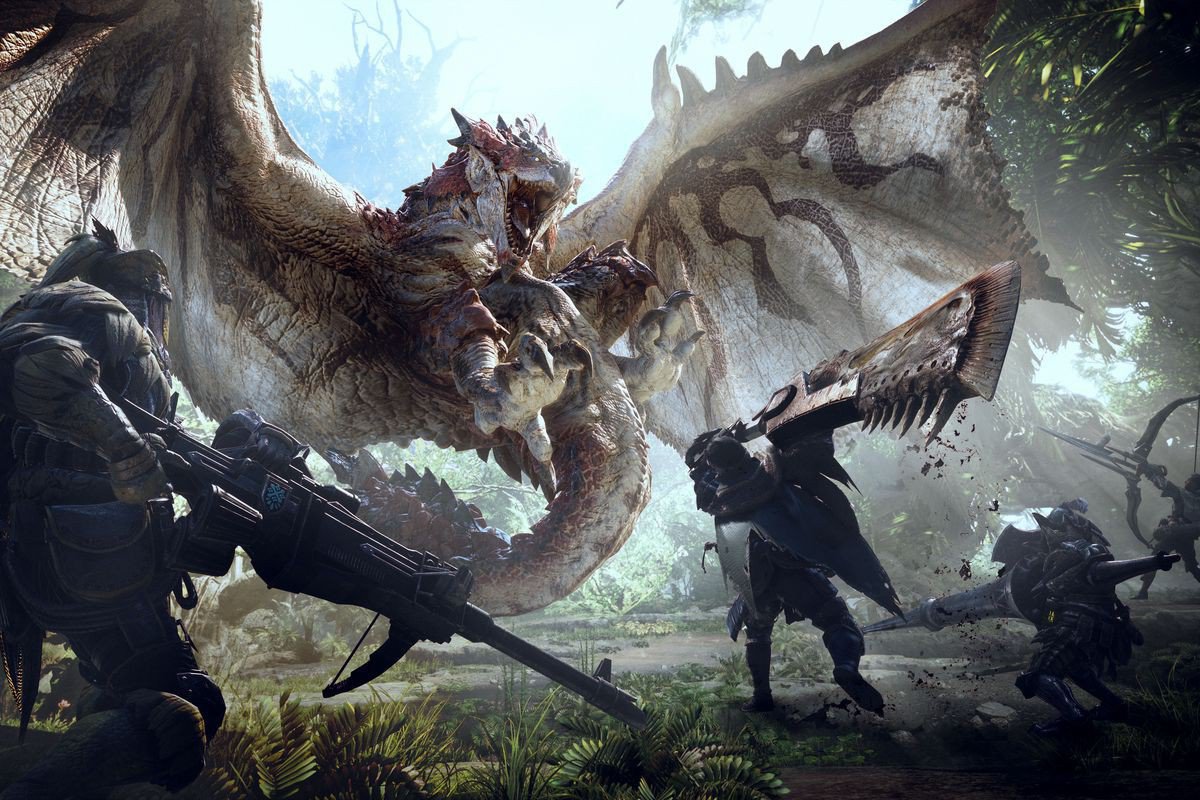 The Monster Hunter games seem to pride themselves on deliberately obscuring minute details of their mechanics, leaving it up to a player’s sheer curiosity and determination to fill in the blanks. Failing that, of course, there’s always crowdsourcing that knowledge from other players—something that’s ideal for, say, when you’re commuting on the train for hours a day, crammed in with like-minded strangers. Many of these aspects that define Monster Hunter as a series are things that wouldn’t find a foothold in Western gaming culture outside the PC until the last few years. It’s a perfect time, then, for Monster Hunter to reintroduce itself to those gamers, but also an even more perfect one to realize that the series—even in its slightly watered-down, newbie-friendlier present form—is still a deeply flawed, obtuse experience.

Within two minutes of starting Monster Hunter World, players are thrown to the wolves, with a cutscene flinging terms such as “Fifth Fleet” and “New World” and “Research Commission” at you, never once stopping to bring newcomers up to speed on what any of these things mean, even through the game’s plentiful but haphazard tutorials. Not that it matters too much—or, rather, that you want it to matter too much. There’s a story to Monster Hunter World, one involving a massive, ancient, igneous dragon that’s come to the aforementioned New World continent, and a garrison of hunters and researchers who’ve taken up residence there and must band together to stop it. But Monster Hunter World is structured in such a way where there’s so many mechanics to consider, so many quests to take on, and so much procedural housekeeping to do that most players will be left too dizzy to really stop and think about the game’s somewhat disquieting pitch.

New World’s humanoid bipeds have taken up residence in a place that’s hostile to their presence, killing most of the indigenous life in order to feed a ravenous arms and clothing industry. This is far from the most egregious example of a game never stopping to consider the ramifications of its premise, but it’s not as if Monster Hunter World exactly offers any other narrative substance to pick up that slack. Throughout the game, the quests are numerous but almost entirely amount to players having to “find this monster and kill it, possible a few more just like it.”

At least the game excels on the fine details of the hunt. You’re never given a direct waypoint toward your quarry, as you must track beasts throughout New World using their footprints, waste products, and lost body parts—a task that gets easier the more you learn about your targets over time. And your charming traveling companion, one of a race of bipedal cats called Palicos, can search the game’s environments for clues as well, often easing much of the busy work of looting everything from your surrounding area. The hunt itself often gets players more acquainted and aware of their environment in a way that more open-world titles could learn a thing or two from.

The actual act of killing is more of a mixed bag. On the plus side, players are given a fully stocked armory of weapon types from the start of the game. All armor and weaponry handle differently, granting various new abilities and ways to play. The options range from a bowgun that allows players to stand back from their quarry and unload, to a pair of twin blades that let you get up close and personal to a threat with flurry strikes. There’s also massive bladed weaponry, the coolest of which is a giant spear that allows you to pole vault above enemies and either come down on them with a slash or mount them and play rodeo clown for a minute, until you’ve calmed the creatures.

The problem here is the game’s—and the series’s—staunch refusal to even teach players how to effectively use their armor and weaponry. Each of your weapons has a satisfying heft and tangibility that wouldn’t be terribly out of place in one of the Dark Souls games, but many of the game’s monsters require the kind of precision and responsiveness that only a scant few of the weapons provide. Probably not coincidentally, those weapons are the weakest ones. Every quest grants enough loot to allow you to run back to the nearest Smithy and upgrade your armor and weapons, but unless you spend hours on end grinding, you’re never powerful enough to significantly damage a beast, or do it effectively enough to ever feel truly proficient in the game, nor are you ever told how to. Also like Dark Souls, non-projectile weapons wear out and become dull, which often means stopping dead in the middle of combat, letting a monster run away so you can sharpen your blade again.

Giving Capcom the benefit of the doubt, this seems to be borne out of an innate push to let the community at large, not a cold tutorial, lead players by the hand—to talk to each other, ask questions, communicate vague ideas in a human way. On paper, that’s a commendable idea. Anyone who wants to try their hand at hunting and fishing can run to Wal-Mart and buy a rifle, ammo, and a fishing line. And doing it right is something that you’re typically taught by friends and family. Monster Hunter World seems to want to emulate that concept in a small way by making the ability to call for help a major part of the gameplay loop, which would also be fine if the game’s labyrinthine menus didn’t make calling for help seem like a surgical procedure.

Taking down Monster Hunter World’s bigger monsters is still an ordeal when you have other players in your session helping you, with such beasts taking ridiculous amounts of damage compared to how much a single player can dish out. But three allies chipping away at your prey makes for a much less tiresome experience, where varied tactics, team chat, and out-of-the-box ideas can be employed without having to send your character back to the drawing board to grab a different set of weapons and gear.

There’s something to be said for that in the current landscape. Monster Hunter World is a game full of people all striving to achieve their common goals within a set of gameplay mechanics that doesn’t so much actively discourage going at it alone as encourage collective work, where the learning is never truly finished. To the game’s credit, it does this more organically and positively than any MMORPG currently out there—and, blessedly, without the ubiquitous specter of microtransactional greed. But to its detriment, without a compelling narrative to drive it on, it’s knowledge gained in service of nothing.