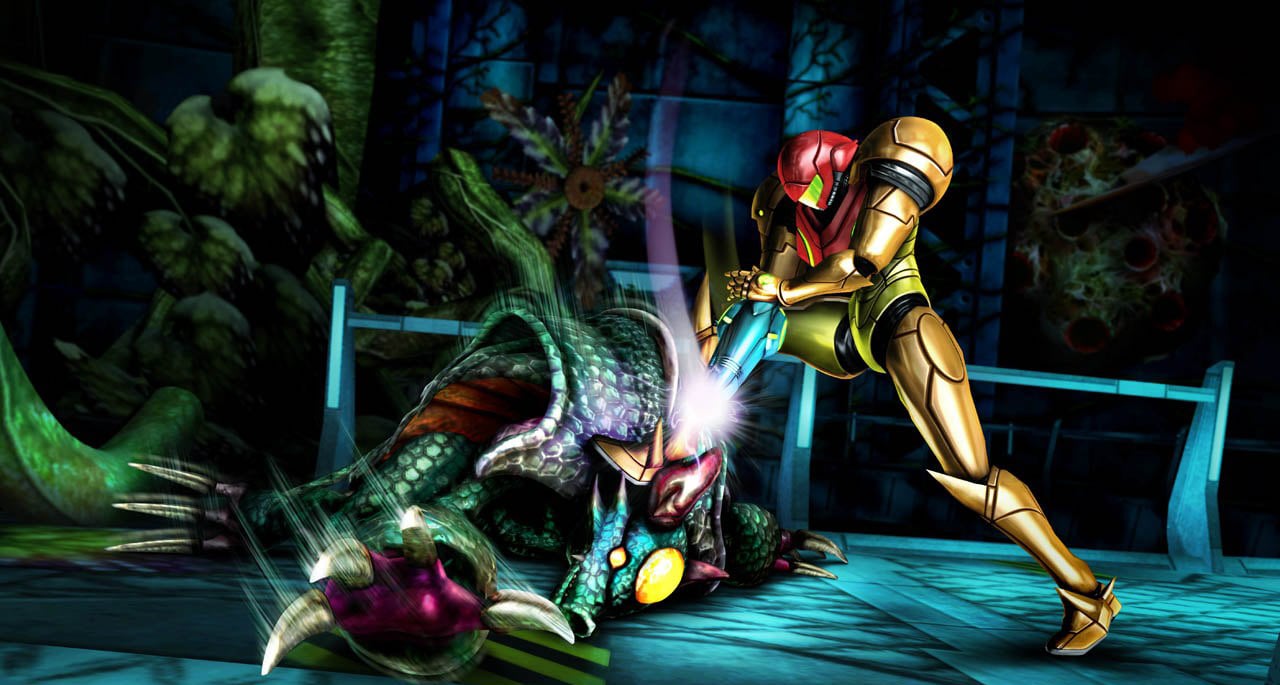 What a mysterious legacy the Metroid series of games has. It always seems to be suspended in limbo, above obscurity but below the ubiquity of other Nintendo franchises, a dangling thread unsure if it should sever its ties from science fiction or reinforce them instead. The underlying appeal of Metroid, whether anyone cares to admit it or not, doesn’t hinge on its action-adventure gameplay mechanics (solid as they are), but rather on its main character, Samus Aran, a tough yet morally compassionate galactic bounty hunter who also happens to be female. That information, first revealed at the end of the first Metroid game wasn’t an entirely original concept for space thrillers (one only has to glance over at Ellen Ripley for proof), but for video games it was quite unique. It created a paradox in which the strong, silent protagonist exhibited emotional depth not through action or mannerisms but by simply being, in an ‘80s digital universe saturated with testosterone.

Metroid: Other M attempts to dispel this paradox by throwing new narrative elements into an otherwise experience-driven game. The notion is indeed admirable, to give Samus Aran a voice and a complete, fleshed-out story, to make her into a character rather than just a vehicle of progression in a game with its main mode of play built around growth and expansion. Moments throughout Other M, however, left a somewhat bitter taste in my mouth, like the Samus that I had adventures with in the past was slipping away from me, sinking into a conglomerate block of “tough female leads” that no one wants to carry along with them and no one would dare crack. Curiously, the thrill of what makes Metroid games glow in a fruitless constellation of “space shooters” remained resolutely intact, perhaps stubbornly so. My feelings coming away from Other M, then, are muddled and gray; it reminded me of the euphoria of the past while also continuing to pitch what could be a glum future for Metroid, one in which narrative is tightly controlled and dogmatically parsed out, a mystery without mystery at all.

It would be a mistake, however, to compare Other M to the Metroid Prime trilogy (2002 – 2007), which reintroduced Samus to audiences and made Metroid relevant again after an almost decade-long drought. Metroid Prime eschewed the traditional scrolling third-person perspective for a game primarily in first-person, much to the detriment of fans who felt that the platforming action and exploration of the Metroid series was being compromised. Fortunately, American developer Retro Studios—working closely with a team of Nintendo mentors, including Shigeru Miyamoto and long-running series director Yoshio Sakamoto—exceeded expectations with lovingly designed, beautiful worlds and near-perfect first-person controls.

Other M returns to the third-person perspective and simpler run-and-gun gameplay of the earlier 2D titles, but also employs in a point-and-shoot viewpoint for Metroid Prime-esque path-hunting and combat sections requiring precise “lock-on” points for heavier attacks with the canonical missile. Most of the game is played as a “classic” Metroid, with Samus progressing through a labyrinth of door locks, hidden power-ups, and grotesque alien creatures on a 2D plane (the controller is held sideways, like an NES pad). When the player has to switch to a “through the helmet” POV, they quickly rotate the Wii remote to face forward, and a reticule can be maneuvered and aimed at specific targets. It’s an awkward motion at first but easily grasped before long. Think of Other M as a spiritual successor to the brilliant Super Metroid (1994), with a nod to the successful 3D mechanics of Metroid Prime. Samus is given a few new stylish abilities, including a quick “dodge” mechanic that allows her to avoid enemy fire at the last second (an absolute necessity for later bosses) and a slick “finishing” move to dispatch larger enemies once they are weakened. These additions clearly aim to heighten the “action” in the action-adventure nature of Metroid games and, though they are a bit one-sided and repetitive, make combat exciting and streamlined.

For the most part, the game controls are extremely responsive and fluid on their own, but a flaw with these two different “styles” of play is that neither really complements the other; when switching from third- to first-person perspectives and back again, the game pauses slightly to allow you to collect your bearings and quiet your hands, a thoughtful consideration but one that ultimately illuminates its own stilted qualities. I also feel that the first-person perspective wasn’t utilized in a very productive way. Most of the time, it’s simply a means to pinpoint a certain weak point in a boss encounter or search for a specific object/character within a 3D space, usually to trigger or advance a cutscene. These “hide-and-seek” sections of the game are essentially pointless, and at times even downright frustrating in their obliqueness (its implementation in one of the final encounters of the game is almost unforgivable). As a mechanic, a manner of interaction, it commits that most damnable of game design sins: it exhibits the qualities of a “gimmick.” No cutscene is worth that.

Ah, yes, the cutscenes. An integral part of Other M, cutscenes serve to present the narrative and provide some background on Samus Aran and her pre-bounty hunter career. The story—which picks up where Super Metroid left off and concerns a possible resurrection of space pirates, metroids, and the monstrous Mother Brain—is well-paced and visually compelling thanks to polished CG cinematics, but again, a strange, empty feeling began to creep into my conscious. Would my Samus, with whom I shared a silent yet conscious symbiotic bond in Super Metroid, say the things that she says and seem so tied down with the shackles of love and instinctual motherhood as the Samus in Other M? Its story, in actually, is not bad by any means, but what gave Super Metroid and Metroid Prime their narrative power was the way that they allowed me to project my emotions onto the main character and realize those feelings through pure interaction. In Other M, how Samus feels and her correlative responses are projected to me instead. While I understand the desire (perhaps need) to give the Metroid series more depth and characterization (modern video games practically demand it), giving a voice to Samus Aran may be one of the largest crimes against the franchise to date.

In terms of presentation, Other M stuns with its high-caliber visuals and sound design; next to Super Mario Galaxy 2, I have yet to see a Wii game look or sound this good, close to tricking me into thinking it’s playing on an HD console. While the environments impress, however, they also lack the organic creepiness that pervaded throughout Super Metroid and the Metroid Prime trilogy. The worlds in those games practically begged exploration; they felt lonely and alien because that’s exactly what they were. The setting of Other M is one large decaying space station, sectioned off into numbered areas. While these different areas have “simulated” environments that resemble ice caverns, lush jungles and even a full size volcano, their reliance on narrative continuity—they can’t really exist as physical locations, merely test chambers—gives the game a neutered, almost sterile feel, nowhere near the dripping, stagnant atmospheres of Super Metroid. To serve the story, I’m even denied the satisfaction of discovering and acquiring new suit power-ups, a Metroid staple; in Other M, Samus is gradually “authorized” by her commanding officer to utilize more of her suit’s latent abilities as time goes on, a narrative device and nothing more.

Yet there isn’t a justification for not recommending Other M to Wii owners: the combat is too good, the visuals too impressive, the music too atmospheric, the level design too polished, the localization too well done (being a tenured Nintendo geek, hearing Leslie Swan as the voice of the ship’s computer melted my heart a little bit). But it seems that a little of Metroid’s “soul” has drifted, Samus Aran’s plight shifting from silent isolation to vociferant space melodrama. Sakamoto is on to something by evoking Super Metroid with more simplified 2D-based gameplay and slick action sequences, but I have a sinking feeling that Samus may become only one character, namely, the character that he wants her to be. This may all read as fanboy caterwauling, but believe me, I’m not complaining about the quality of Other M’s story or the way it’s told; in all honesty, it’s quite decent. But those hoping for the next Super Metroid will probably be disappointed. Contemporary video games have always wrestled with the notion of Narrative vs. Experience when it comes to how their messages are received; Other M marks a shift for Metroid in that it favors the former, even though the latter is the foundation that this legacy is built on. The mystery continues.