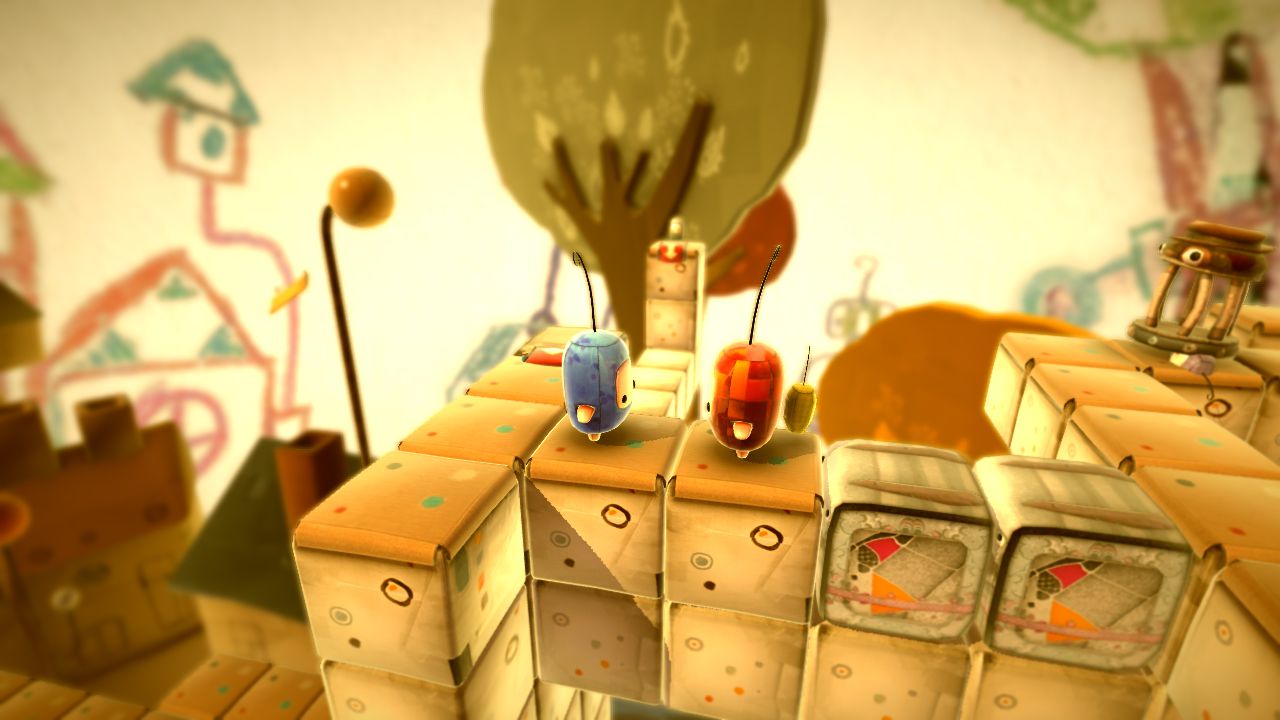 Ever since the surprise success of Braid, developers have been trying to copy its puzzle-platforming success. The latest attempt to combine whimsy and brains is ilomilo, an Xbox Live Arcade title that wraps its gravity-twisting puzzles in a whole lot of adorably fuzzy styling—and a curious dislike for capitalization.

The appropriately wispy story of ilomilo is a tale of two sadly separated cute little critters trying to return to their beautiful friendship. The player switches between ilo and milo to wander through floating platforms full of movable blocks, elevators, obstacles, and gravity-switching devices. Along with the main goal of getting ilo and milo to find each other, the player can also pick up flowers, old-fashioned LPs, and Polaroids (which unlock extras in the gallery menu), and even smaller, cuter critters who grant access to bonus puzzles.

The game starts with a few very easy tutorial levels, but the puzzles get tricky well before the end of the first chapter, and by the middle of the game, they’re positively fiendish. Besides the enemies blocking your path, the game’s frequent shifts in gravity mean that just heading toward your buddy is never enough; you have to plan your route in a way that will guarantee both ilo and milo end up with their feet on the same ground. The puzzles are even more challenging if you try to get all the bonus items, and though the stages are designed so you’re never irretrievably lost, it’s frequently worth restarting a level when you get too hopelessly bollixed by the twists and turns.

The puzzle-y gameplay is wrapped up in an overwhelmingly—or maybe overbearingly—cute package. Besides ilo and milo themselves, who look like marshmallows with arms, the whole world is decorated with Dave McKean-inspired decorative foofraw, and every character design seems to have been engineered for maximum “awwwwwwwwww.” More impressively, the game pulls off Braid’s trick of imbuing gameplay mechanics with thematic resonance. In a game about trying to regain a lost friendship, it’s achingly poignant to see ilo and milo unable to connect across two sides of a cube, unbridgeably separated by a cruel trick of gravity.

The gameplay is solid, the design is unique, and the whole package effectively merges theme and content. So I’m left with the question: Why don’t I like this game more? On paper, it should be ideal, and yet whenever I play I find myself feeling surly rather than delighted, and I’m struggling to pin down whether there’s really something wrong with the game, or if I just ate some bad clams.

Much of the trouble is that the game just tries too hard to be cute. Ever since Southend Interactive flopped with their first game (the fun and underrated Deathrow), they’ve been condemned to crank out reboots and rip-offs, and the bad habit of starting with a desired effect and then building a game around it has infected ilomilo’s design process. Its desperate desire to be loved pushes it over the line from cute to cloying. The crowded design and the relentlessly goofy intersticial text left me feeling constantly nudged in the ribs, like my enjoyment was being demanded rather than won.

The cuddly style is particularly at odds with the fairly cerebral gameplay, which demands planning and detachment, rather than blissful grooving with the flower people. I salute the effort to make a game whose design won’t alienate those who might enjoy a less twitchy video-game experience. Oh hell, let’s just say it: It’s a good idea to make a game whose design is a little more friendly to women who might enjoy this relaxed, thoughtful game. But there’s a weird disjunct between the mood the style conjures and the mood the gameplay creates.

It’s entirely possible that I’ll come back to this game a few months from now and have a wonderful time; there’s no arguing that everything I can describe objectively about the game is great, and my negative reaction is entirely subjective. If the description above sounds interesting, try the demo for yourself (Microsoft’s rule that every XBLA title must have a demo may be one of the best decisions Microsoft has ever made), and feel free to tell me that I’m a curmudgeon who hates joy, puppies, and Christmas. All I can say is that for me, ilomilo is the Little Miss Sunshine of the gaming world—an overpackaged attempt to coerce my pleasure.