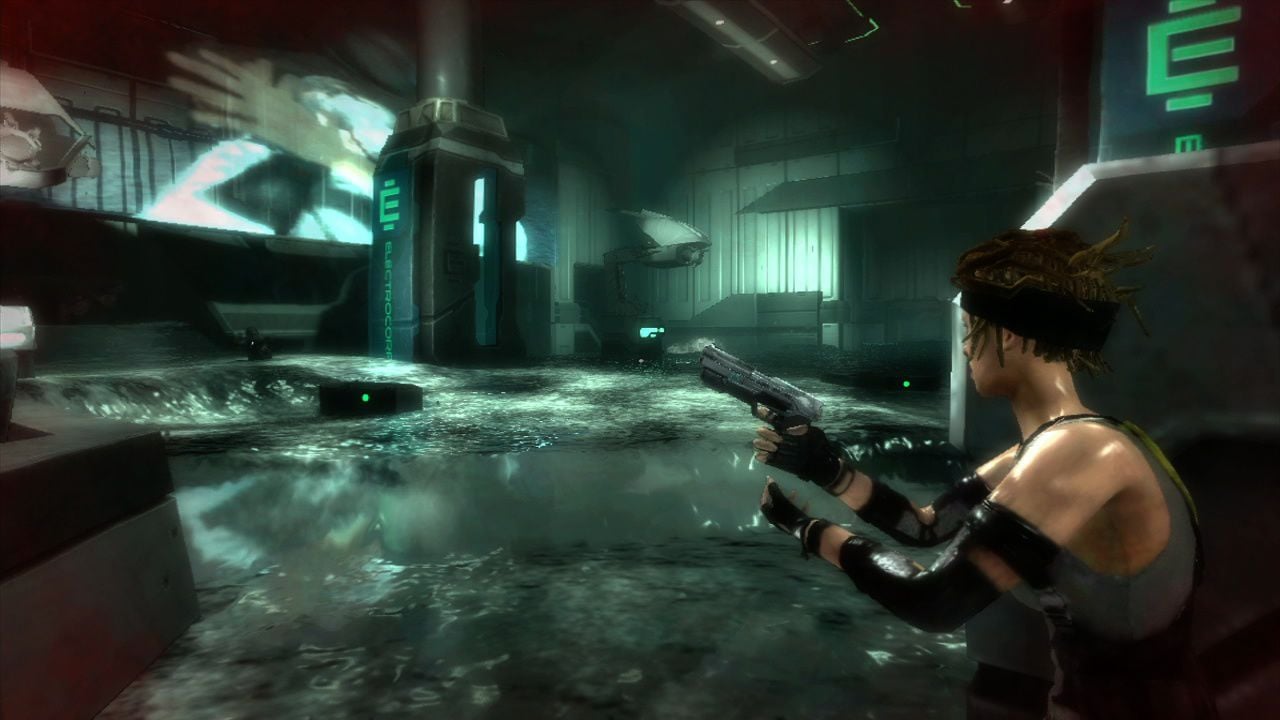 Hydrophobia is the gaming equivalent of a good B movie: solid, unpretentious, and reasonably satisfying. Itâ€™s not out to compete with the eight-figure budgets of the blockbuster gaming world, itâ€™s just trying to give you a few hours of fun with some twists you havenâ€™t seen before. And though it has serious problems that keep it from low-expectations perfection, itâ€™s got enough technical achievements to keep it from being dismissed.

Hydrophobia is the kind of third-person action adventure that used to come out by the dozen for the original Xbox. You play as Kate Wilson, an engineer/security operative on a near-future floating city. Props to Dark Energy Digital for giving us a game heroine who isnâ€™t a gun-toting sex bomb, though I couldâ€™ve done without the whimpering every time she bumps something. Kate is sulking in her room when the ship is invaded by murderous Malthusians, a terror group that seems to have decided to hurry along Malthusâ€™s prediction of population collapse by shrinking the population. Or are they trying to stave it off? Or just increase Malthusâ€™s paperback royalties? Itâ€™s a little hard to say, but whatever; though Hydrophobiaâ€™s oceanic environments and leprechaun-voiced guide show a distinct BioShock influence, this really isnâ€™t a game about story.

What itâ€™s about is environmentâ€”not environment as an artwork to explore, but environment as things you can manipulate to kill baddies. Hydrophobiaâ€™s most interesting deviation from standard shooter formula is giving you very weak ammo for most of the game, so instead of putting holes in terrorists, youâ€™re blasting cracks in the ship hull, downing wires over puddles, and blowing up gas tanks and good olâ€™ exploding barrels in order to make the level props do your dirty work for you.

The environmentâ€™s homicidal capabilities are enhanced by impressive water physics. Fluid dynamics have always been a tough problem for game developers, not least because theyâ€™re pretty tough for real-world Newtonians; most physics-class discussions of water movement always include caveats that “this isnâ€™t really how water particles move, but actually formulizing how water particles move is nearly impossible.” Hydrophobia works hard at making water move like waterâ€”surging forward, leveling out gradually, and moving back and forth based on the velocity with which it emerged. This makes gameplay delightfully unpredictable, since small changes can result in the water behaving very differently.

Unfortunately, the developers at Dark Energy Digital are better engineers than designers. The water acts like water, but never looks like it; it looks more like the building goo of the T-1000 than the less physically realistic water of other games. More importantly, Hydrophobiaâ€™s dark, faux-realistic aesthetic makes it very hard to tell which parts of the environment are interactive, so many of the environmental puzzles are unnecessarily difficult. I often found myself resorting to run-of-the-mill barrel explosions only because I couldnâ€™t see the breakable windows and cables that would yield more exciting devastation. Thereâ€™s a tech-view option that makes things look delightfully Tron-esque, but itâ€™s not usable during fights (unlike Batman: Arkham Asylumâ€™s similar but more useful Detective View), so you mostly end up going for the obvious in the heat of battle.

Similarly, level design tends to be gratuitously crowded and confusing, making for a lot of unclear objectives and time wasted wandering around. Designers of the world, please think before scattering your levels with doors I canâ€™t open! I know it occupies wall space, but itâ€™s gratuitous visual noise. Even worse is how hard it can be to figure out which of the very similar corridors youâ€™re supposed to go through next, despite the handy and realistic on-board signage. The game occasionally gives you a waypoint to your next objective, but those are erratic and often incredibly unhelpful, pointing you to places with no indication of how to get to them. Sometimes this effectively evokes the panicked feeling of being harried through a collapsing environment, but a lot of the time itâ€™s just annoying.

In the tradition of the B movie, Hydrophobiaâ€™s low production values make me more affectionate toward it. If this were a $60 retail release, the visual problems and lack of narrative oomph would make it untenable. But at 1200 MS points, itâ€™s a solid piece of entertainment. You wonâ€™t have your mind blown open, but itâ€™s definitely an enjoyable five hours (extended by the Challenge Room leaderboads), and a promising start for a new developer. Plus, itâ€™s worth seeing just to enjoy such help-text Britishisms like “Press B whilst swimming,” perhaps the most civilized shooter instruction of all time.