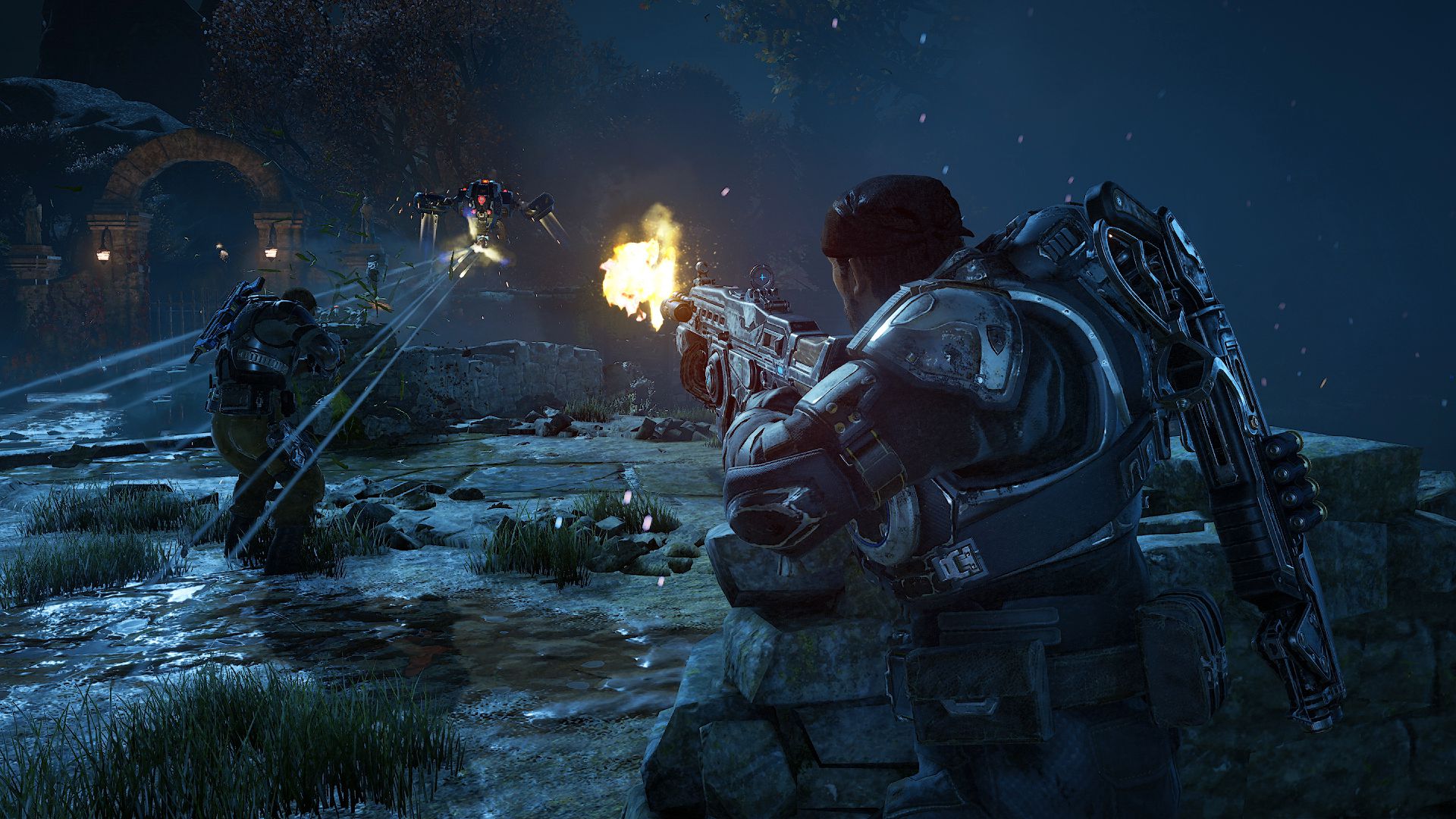 The latest in the Gears of War series could have been a contender, following as it does in the footsteps of Halo by launching under brand new management. But where 343 Industries used Halo 4 to advance the themes and gameplay concepts that developer Bungie originated, creating a strangely intimate story that’s more about Master Chief than the universe at large, Gears of War’s first outing under its new developer, The Coalition, is more or less the same old song and dance. Admittedly, it’s a visually stunning one, as the game blessedly trades in the series’s trademark dull grays and browns for lush greens, gentle moonlit blues, and golden sunbeams, but this is the only area where Gears of War 4 towers over its predecessors.

There are smaller steps forward, primarily in the area of characterization. Series protagonist Marcus Fenix and his ragtag bunch of meatheads have been swapped out for newer models: Marcus’s son, J.D., and the younger Fenix’s friends, Kait Diaz and Delmont “Del” Walker. The trio is representative of a post-war millennial sensibility, having grown up in the aftermath of the original series’s alien invasion. The Great War that Marcus fought is now a “Never Forget” platitude, trotted out when their home planet of Sera memorializes the day ghoulies from subterranean depths rose to the surface.

The timbre of the Gears of War series is changed with this game’s focus on these characters’ playful wit and sarcasm. When everything goes to hell in Gears of War 4’s later stages, the camaraderie that prevents J.D. and company from falling apart is made of stronger, more believable stuff than the painfully cartoonish, gravel-voiced gung-ho military swagger of Gears of War games past. These are companions to travel with, not laugh at, and it goes a long way toward making the journey players are taken on more enjoyable.

It also helps that the scope of these characters’ journey has been pared down a great deal from the days where every firefight was for the fate of the world. Gears of War 4 is mostly a rescue mission, in which the pastoral tribes of outsiders who’ve chosen not to live under the yoke of Sera’s new government have been snatched up by a new breed of alien monsters, and J.D., Kait, and Del decide to lead the fight to find out what happened. Gears of War has always dropped players into the fight against the Locust Horde in media res, and so much of what our new heroes face is unknown and has seriously disturbing body-horror explanations. Even when some expected and familiar faces and names start popping up, they’re just as much out of their element as everyone else, and many of the game’s questions about what exactly the new aliens are remain unanswered by the time the credits roll.

The game’s successes as a continuation of Gears of War’s narrative, however, falter in the face of stubbornly archaic gameplay. Actually playing Gears of War remains a slow-moving bull-in-a-china-shop affair, where weapons and melee attacks have a satisfying heft, weight, and impact, but even small movements like trying to turn around can feel like trying to get an elephant to tap dance. The cathartic feel of the weapons is cancelled out by the fact that enemies are still bullet sponges that can sometimes take entire magazines to kill, whereas J.D. and his friends start bleeding to death in three hits.

Some little tweaks have been added to make getting up close and personal with the enemy more interesting and useful; if you’re on the other side of a wall being used by an enemy for cover, it’s now possible to reach over and grab them and pull them to your side to introduce them to the business end of a knife. Thing is, getting close enough to use any of the new melee options without getting mowed down in a hail of gunfire is rare. The clumsiness of the controls, and the sheer effort just to take down even the most basic enemies creates an experience that requires a lot of coordination and strategy to avoid being killed, but just isn’t as fun or gratifying as a game ridiculous enough to include a gun with a chainsaw strapped to it should be.

The game’s multiplayer experience is similarly exhausting rather than exhilarating, especially the Horde Mode, which is predicated on the player having to kill even larger, more annoying waves of enemies—and the amount of effort spent doing so results in paltry rewards. In this regard, the game is just like every Gears of War title that’s come before it.

Gears of War 4 ends on the worst kind of cliffhanger, a heartbreaking scene that beautifully resolves one thin strand of a plot thread in a game that asks at least five or six huge questions about the world J.D. and his buds find themselves in post-Locust. It’s hard to imagine a scenario where the answers are worth yet another trudge through the ruins of Sera, even if it means doing it surrounded by the best group of companions the series has ever presented.

Review: Exist Archive: The Other Side of the Sky