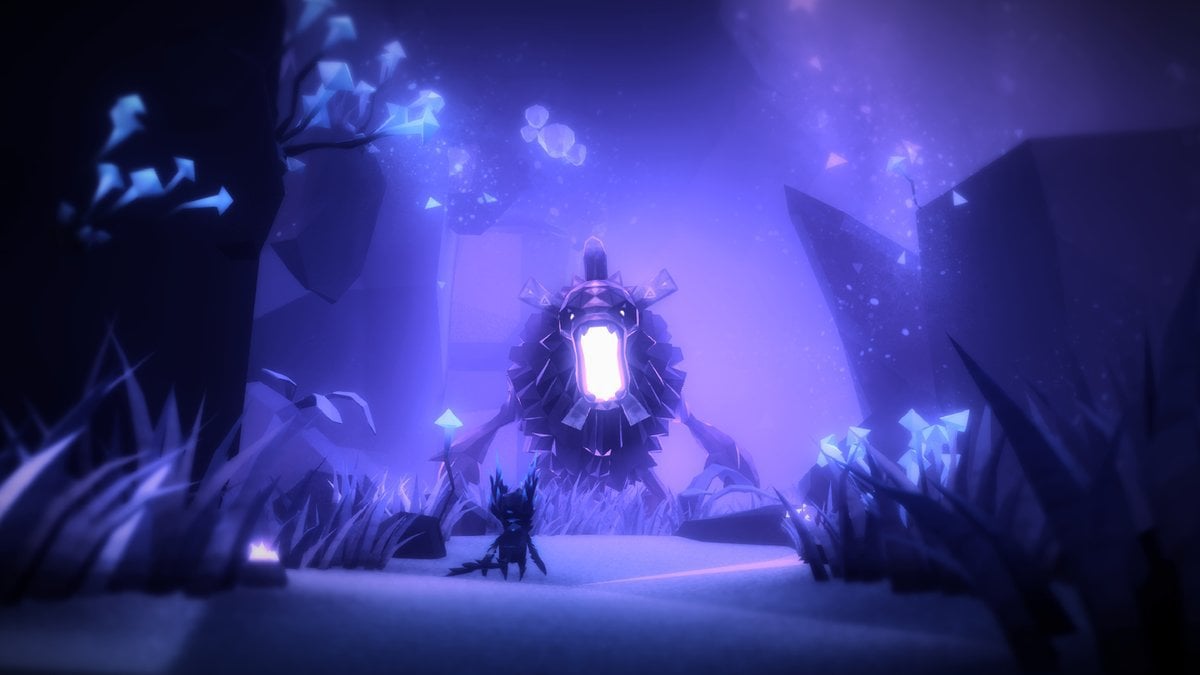 Players will spend much of Fe freeing wildlife from the humanoid Silent Ones and learning to speak the language of nature. A shame, then, that the game’s flora and fauna have so little to say. The simplistic, polygonal aesthetic through which most of the landscape has been rendered only reinforces the game’s resounding emptiness. The terrain changes, from river-run valley and oceanside swamp to windswept glade and icy mountain, and with it the color schemes—the purpled trees giving way to the marsh’s ochre or the mushroom cave’s psychedelic glow-in-the-dark blue. But the basic theme repeats: Follow a young animal, observing how it sings to and interacts with objects, then save three to four of those creatures so as to earn the respect of its parent, thereby gaining its musical vocabulary—which is to say, its power.

These basic interactions are initially clever, as players learn that green plants, when gently coaxed into unfurling, will release seeds that can be thrown to dispel the gummy webs that the Silent Ones use to trap their prey or seal off areas. Boars, almost Moses-like, are able to part walls of fungi, whereas the deer (for some reason) can cause orange blossoms to pinwheel, conjuring up gusts of wind that you can use to fly. But these same tools are utilized over and over again, rarely in any sort of combination. And despite there only being six color-coded powers to unlock over the course of the game, they wind up having too-similar effects; the translucent indigo spirits, which absorb you and then pop you high into the air, act almost identically to the purple flowers that launch you across platforms. You keep waiting for the point at which Fe will begin to combine these elements into more complex puzzles, but too much of the game is spent having the protagonist mechanically match colors to songs before then simply singing them. This act does little to advance the game’s larger theme about how an ecosystem is formed by the interactions between creatures and nature.

Perhaps Fe feels that it doesn’t need to say all that much. The Silent Ones are essentially polluting the forest, reducing its vibrant purples and greens to desiccated, arid orange hues and shutting out the sounds of the native wildlife as these critters are caged in sludge. Your character, a furry, foxy shadowy sprite, must rebelliously sing out to free your compatriots and restore the environment to its original luster. And yet, there are engraved stelae found all over that hint at there being more of a connection between your protagonist and the Silent Ones; a dozen of your antagonists’ helmets allow you to briefly visit the fragmented memories of these adversaries. You can see how the forest animals communicate with nature, understand what it is that they’re after, but it never becomes clear what the Silent Ones want. What they seek to obtain from nature remains muddy at best. There’s no master plan to thwart, and no climax to their machinations.

The clearest sign that Fe is capable of doing more comes early in the game, when the player first stumbles out of the denser sections of the forest and comes across a behemoth of a deer that’s been imprisoned by shadowy energy at the center of an enormous glade. Whereas the game has until this point been relatively small in scope, set atop tiny treetops or on a low-flying owl’s back, this wide area is filled with high crags that in and of themselves are dwarfed by the giant deer. Once you’ve freed the deer of the conduits holding it in place, the animal gallops around the domain, each hoof quaking the ground, the trees that dapple its hindquarters bouncing like whiskers.

The moment in which you must not only climb the creature, but find a way to speak to it, demonstrates that Fe is capable of surpassing such inspirations as Shadow of the Colossus. Here, the interplay between creatures, from the very smallest to the very biggest, is clear, as is the way in which the Silent Ones have stilled that vibrant chemistry (even if their motives remain unclear). Subsequent areas in the game are more limited, and play out to diminishing effect. Releasing the small sections of swamp that have been vacuumed up into gelatinous orbs, or reuniting the seaside slugs separated from their young, doesn’t have the same impact as freeing the titanic deer from its bonds, after which the area’s biome so visibly springs back to life.

The longer Fe drags on, the less vital it feels. There are purple power-up crystals hidden around each area, but because only the first two skills they unlock are required (tree-climbing and gliding), acquiring them is little more than a time-wasting chore. In fact, given the lack of fast travel and the size of each area, players are discouraged from wandering off the main path; toward the end of the game, players are actually actively prevented from doing so. What Fe ultimately communicates is a lack of maturity and confidence. It’s filled with rote tasks instead of meaningful objectives and the hyper-stylized imagery actually impedes attempts at emotional connection. Fe may have its own language, but it translates into an all-too-standard platformer.