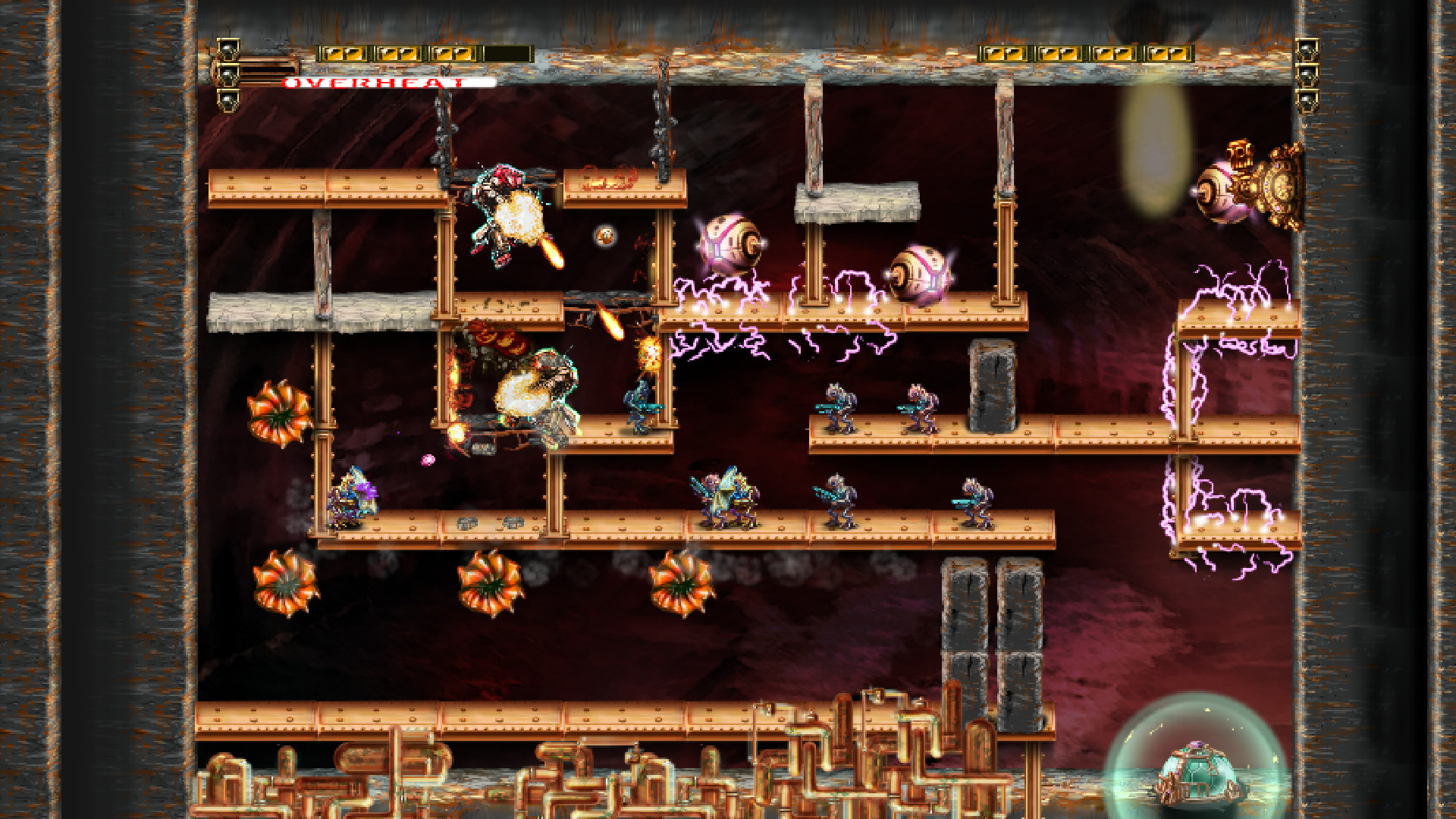 For anyone who grew up with video games, playing the games of Nathan Fouts is like rubbing your face in a Proustian madeleine scented with Chuck E. Cheese’s pizza. You can practically feel the zits popping on your face as he drops even the most thoughtful devotees of art games into the headspace of a sullen 12-year-old with a switchblade. At a time when gaming is working hard to be regarded as capital-A Art, Fouts’s work is a gleeful punk-rock blast of disreputable goofiness. Explosionade—the title alone!—might be a little too self-consciously retro in some regards, but at an Xbox Indie price point, the only reason not to buy is if you’re determined to slap a green eyeshade over your inner child’s not-yet-receded hairline.

Unlike many developers working in the neo-retro-gaming genre, Fouts doesn’t go for 8-bit fidelity. The shimmering heavy metal riffs that slather his soundtrack would have been unimaginable with the old technology, and the same goes for his triumphantly gnarly character designs, which depend for their effect on the high resolution of modern consoles. Similarly, the smartly dumb writing would’ve been both over the head and under the belt of arcade managers in the average pizza parlor; it’s hard to imagine any game in those innocent days being so irreverently intertextual with other pop culture.

What guides Fouts isn’t technological fidelity, it’s nostalgia for atmosphere. His work is less about recreating the look and feel of ‘80s video games and more about imagining a world where the in-your-face game advertisements that aired during He-Man were accurate representations of digital brain-melting, rather than the product of execs desperately trying to link their clients’ beepy-bloopy products to something a little more, in the parlance of the time, rad. Fouts is to games what Big Daddy Roth is to cars, creating tributes to a scene’s imagined self-image rather than preserving the details of real life.

Explosionade isn’t Fouts’s best, but it’s still a solid quarter-eater, especially at a price of four quarters. The game is a pretty basic 2-D shooter, but with each level confined to a single room rather than sprawling through a side-scrolling level. Your mech is equipped with jet boots and grenades along with the usual blasters, and a shield that lets you protect yourself from enemies and catch major air on bounces. Along with killing small enemies and the occasional boss, you can also take bigger risks for high-value bonus items, and decide for yourself whether you’re going through a level focusing on body counts or speed.

This time, though, Fouts seems to have run out of ideas before he ran out of game. Except for a few bosses, the enemy design is mostly exhausted by level 10, and there’s little by way of new gameplay mechanics or even new music as the game progresses—though the Yngwie Malmsteen-style arpeggio that closes each level never stopped delighting me. The character designs are always fun in Fouts’s games, but here they’re badly served by the distant camera; there’s an option to zoom in, but since that offers no strategic advantage and a pretty substantial drawback (as enemies can target you from the opposite side of the board), you’ll spend the whole game with the finely etched designs looking more generic than they should.

Fouts’s masterpiece remains the sly and creative Xbox Indie Game Weapon of Choice. But unfortunately, too many people are unwilling to spend $5 on an absolutely stellar game that you should, for chrissakes, buy right now! So he’s moved back to $1 projects while trying to get his upcoming titles onto the better-positioned Xbox Live Arcade. So though Explosionade may not be his best, it’s well worth picking up just to see what his work is about; I guarantee you it’s a better fun-to-dollar ratio than the last few big titles you’ve blown your allowance on.