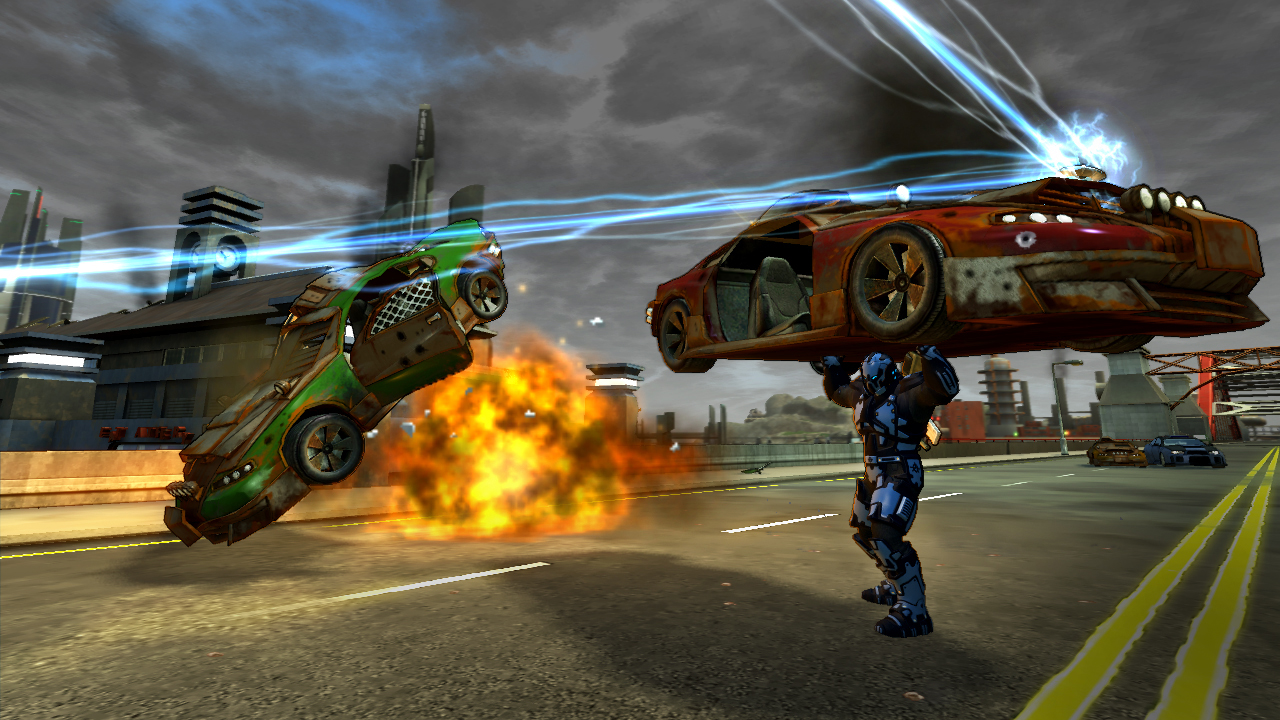 Just about every gamer has suffered the perverse and humiliating delight of a bad game that you can’t stop playing. You know that your time, your life, your precious youth is being callously wasted, but some terrible Pavlovian urge keeps the controller in your hands, even as you ignore spouse, friends, and much better games for the sake of pursuing something you don’t even want. With lazy gameplay and unimaginative design, Crackdown 2 squanders the good will its unpolished but enjoyable predecessor earned, but it does offer some shameful, atavistic pleasure.

One good gameplay mechanic can make a weak title enjoyable, and in Crackdown, it’s the jumping that renders the whole experience almost worth it. There’s so much delight in the game’s amiable physics that you’re constantly tempted to ignore all the shooty-shooty and just enjoy playing the most cheerfully undemanding 3D platformer ever. Pacific City is once again full of buildings (mostly the same buildings, I’m afraid), all of them practically begging you to find a path to the top. Once you’re on top of a three-hundred-story skyscraper, the obvious next step is to jump off it, at which point the nicely implemented wind and motion blur effects kick in to make falling an incredibly visceral thrill. It never stopped being a delightful surprise to survive a several-mile drop, with only a dent in the concrete to show for my epic plummet.

But when you come back to earth, you have to deal with the other legs of the Crackdown stool: shooting and driving. And they are some wobbly-ass legs. The driving is just what it was in Crackdown: like pushing a brick through glue. There are more cars to choose from, but it’s a long way from the racing-game fundamentals that the Grand Theft Auto series always nails. And shooting has actually gotten worse, with an auto-aim preternaturally consistent about never, ever targeting the thing you’re looking at and no way to snap between targets.

In any sandbox game, the quality of the sandbox matters a lot, but Crackdown’s city is still utterly without personality. The audio logs (sigh, yes) lay out a reasonably interesting story of citizens vs. criminals vs. Agency vs. monsters, but none of that makes its way into the world, which is stocked with boring ads, citizens with nothing interesting to say, and buildings you can’t enter. This is a prime example of one of game development’s worst tendencies: The writers were stuck in a dialogue-writing box and no narrative was allowed to escape into the wild.

Plenty of other little problems from the first game remain unsolved. The narrator retains his Tourette’s-like habit of butting in with suggestions totally unrelated to what you’re doing. The music is still generic and badly cued. And while it was just barely acceptable to release an open-world game without waypointing when the first Crackdown came out, it’s not okay anymore, and it’s even worse when the minimap is so freaking broken (how in God’s name do you screw up a minimap?!) that it almost never accurately shows you where the closest objective is.

Usually, game sequels try to expand the story, the characters, and the enemy types. Maybe the most original (not good, but original) aspect of Crackdown 2 is that it does just the opposite. The motely gangs of the first game are gone, replaced by exactly two types of enemies: criminals from the Cell gang and underground mutant Freaks (and if you think the latter is going to result in the constant in-game use of a certain ‘70s disco tune, you are already as witty as the game’s designers). Once you’ve played through the first hour, you’ve seen just about every enemy the game has to offer. It’s fun to drive your car through a crowd of splattering baddies, and kudos to the programmers who made it possible for so many of them to be on screen at once, but there’s just not enough variation to keep it interesting.

Worse yet, they’ve totally lost the clever nonlinear structure of the first game, where you could take missions in any order and have each one affect subsequent missions. Instead, there’s exactly five kinds of missions, you’ll do them over and over, and there’s nothing to keep you going but an urge for attrition. In the worst insult to the first Crackdown, none of the missions change the world in the least. You’d think that completing the Agency’s citywide anti-Freak final solution, complete with dramatic cutscenes, would have some effect on the rest of the game, but instead, the instant the Death-of-the-Freaks cutscene finishes, the Freaks are right back where they were, cheerfully munching on civilians as though no one just wiped them from the face of the Earth.

The final addition made for the sequel is online multiplayer. And it’s lame. You can play four-person co-op, which in theory should be a lot of fun, but trying it, I was quickly reminded that what makes Crackdown fun is the ease with which you can get distracted: I’m on my way to a mission, but decide to stop and investigate a far-off orb, or get involved in a shootout, or just grab a cool car. The difficulty of coordinating four people over an Xbox Live headset means these kinds of distractions are fatal to unit cohesion, so you’re discouraged from playing the game as it’s most fun to play.

Most obnoxiously, the single-player game is scattered with “Live Orbs,” that the can only be collected in multiplaye. You might think that orbs that only affect multiplayer could simply be turned off when in single-player, but that would deprive the game’s narrator of the chance to smugly scold you for playing alone every goddamn time you get anywhere near the goddamn Live Orbs. Look, Ruffian, I know you want to show off your networking code, but yelling “YER DOIN’ IT WRONG!” when I’m trying to play the game you shipped is what swingers would call “a major turn-off.”

Crackdown 2 didn’t fix any of the problems of its predecessor, and it adds quite a few for good measure. It’s boring, repetitive, and incredibly lazy. There’s almost nothing to recommend it.

But it’s actually kinda fun. I hate to say it, but it is. The first few hours are a slog, but once you’ve leveled up a bit, the basic running-shooting-jumping power-fantasy-fulfillment is entertaining, and the flashy orbs flying at you every time you so much as parallel park are a potent Skinner-box reward. Even as I was telling myself how inadequate the game was, I was still hooked on a “just one more mission” cycle.

If you’re looking for a summer time-killer, you could do worse. But if you haven’t played the first Crackdown, buy that one instead; it’s a lot cheaper and a whole lot better, and I hate the thought that Ruffian Studios, a relatively new company with some real potential, is going to be rewarded for churning out this uninspired filler.