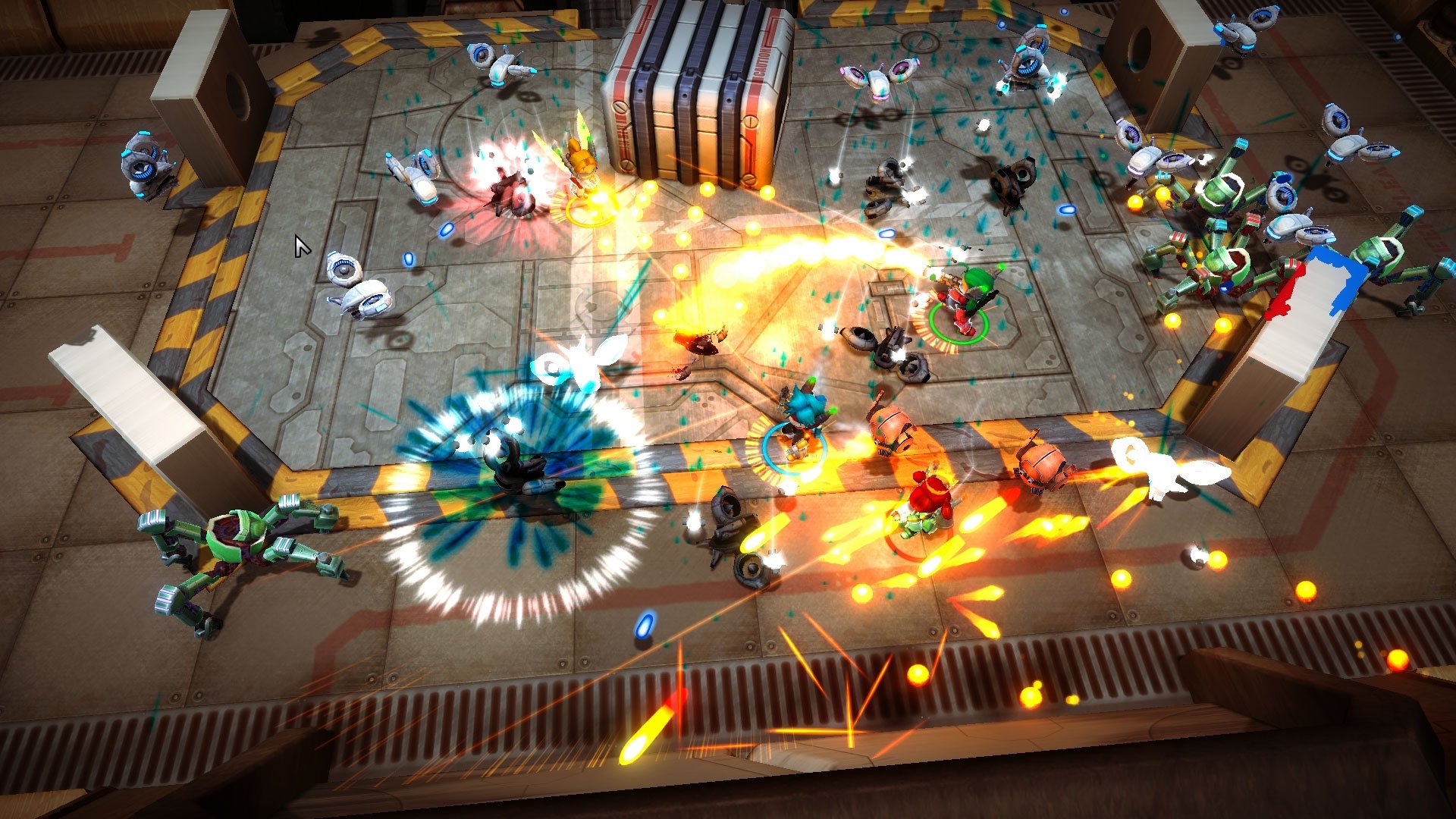 The first few minutes of Assault Android Cactus are a deliciously evil bait and switch. A chibi-style android cop named Cactus wisecracks her way onto a massive space freighter whose artificial intelligence has gone rogue, learning that the ship’s humanoid android custodians—all with food- and plant-related names—are the only ones that can stop it. The cartoonish menagerie that makes up the main cast brims with good-natured humor and personality, but beneath the cutesy, Nickelodeon-TV exterior lies an industrial beast of a game, a twin-stick shooter that adds complexity and depth to a genre that typically has no use for either. Where most games of its ilk test the player’s ability to dodge and weave and little else, Assault Android Cactus asks more of the player’s intelligence than one would ever expect from a game where there’s a robot who picks her nose after droning “Everything’s dead.”

The core of the game is fairly standard for its genre, where the left stick is used for moving, the right stick for aiming, and one shoulder button fires while the other allows one to switch to a secondary weapon while performing a dodge. But the experience is closer in feel to Contra than, say, Geometry Wars. You start out with a choice of three androids, each with different primary and secondary weapons, though more unlock during gameplay, and the range of combinations is impressively wide. Cactus herself starts with a standard machine gun and a short-range-damaging flamethrower, but the weapons for the other droids differ wildly in creativity, from a gun that fires seeking projectiles to a remote-control helicopter that shreds through enemies. Secondary weapons range between simple exploding rockets to a handheld drill that’s meant to plow through and nail multiple enemies to the opposite side of a stage. Enemies will later drop power-ups to add turrets to your arsenal, freeze enemies in place, or temporarily improve player speed.

The stages are equally varied, and with time evolve into grand-scale chaos. The first two throw your tiny android into enclosed rooms, and later ones expand to include winding paths where enemies can hide and fast-moving elevators where enemies consistently drop into from the ceiling. In one of the more insane latter stages, the floor gives way every few minutes and drops the player and enemy alike into new obstacles—and in another, the tiles of the floor shift to create a brand new room around the player every few seconds. All the while, you must fend off legions of cannon fodder. Not keeping your android moving on a constant basis will likely mean getting easily overwhelmed, and it’s a testament to how technically sound Assault Android Cactus is that hundreds of enemies can be on screen at once. Indeed, it isn’t until the particularly hectic final stages that the typical shoot-’em-up problem of stuttering framerates rears its head.

Fortunately, the player has infinite lives, but therein lies the catch, and Assault Android Cactus’s big gimmick: Every android has a battery life that consistently drains during the course of a stage. Killing certain enemies and picking up a specific power-up will recharge the battery, but it’s “game over” if the battery runs out. It sounds like a fairly simple proposition on paper: Just keep killing until a dead enemy drops a battery. In practice, though, as the enemies get smarter, more oppressive, with maybe a dozen of non-duplicated enemy attacks happening all at once, finding the battery, and hoping you don’t have to waste time blasting your way clear across a room to collect it before it disappears, becomes a blood-pressure-raising proposition, especially during the game’s riotous bullet hell-inspired boss fights.

Assault Android Cactus requires the player to consistently manage their time, to tackle each stage like a perpetual ballet dedicated to the sole purpose of making robots go “boom.” When you die, which will happen often, you’re sung to your next try by a fun little bass-dropping ballad about little androids with low batteries. No matter how hard it gets, the game never stops reminding you to have fun. In all of the five hours it took to beat it, that reminder never felt necessary; the game does a stellar job of that on its own.