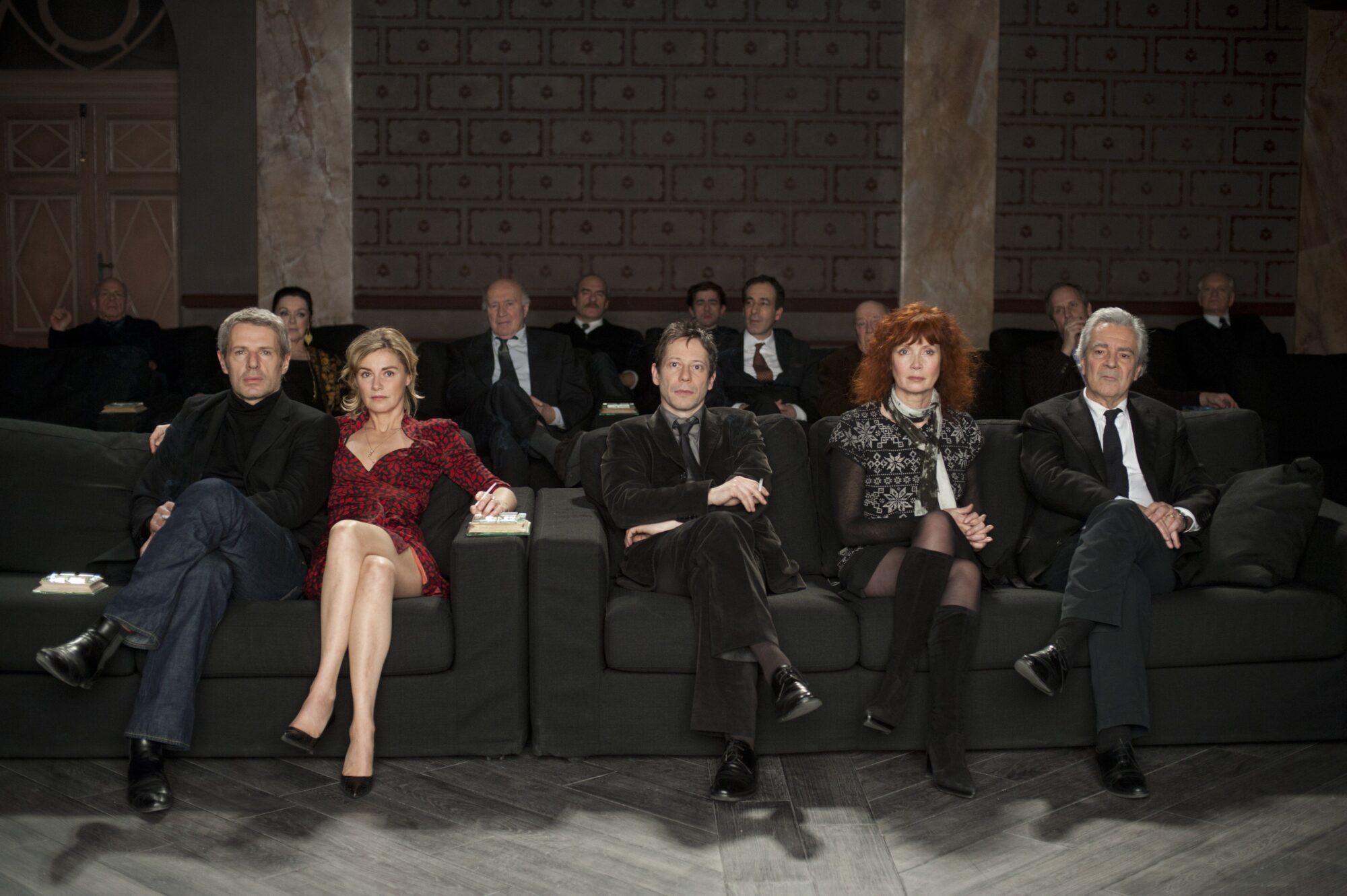 There’s virtually no limit to the levels of reflexivity on display in You Ain’t Seen Nothin’ Yet, but what does all this meta-cinematic (and meta-theatrical) play add up to? One way of looking at French master Alain Resnais’s latest would suggest that it amounts to very little other than a skillfully executed study in cleverness, filled with the sort of superficial bursts of imagination that dominated the director’s previous effort, Wild Grass, itself little more than an exercise in whimsical pastiche. Another, more generous way of approaching the film, though, would be to consider it as an answer to the long-posed question about the proper relationship between a theatrical source (in this case Jean Anouilh’s Eurydice, with material thrown in from another of the playwright’s works) and its cinematic adaptation. From this angle, the reference point in the Resnais canon is 1986’s Mélo, which similarly foregrounded and made a virtue of its theatrical source while doubling and tripling the layers of irony, though nowhere near the extreme degree that the director pursues in his latest.

The truth is that You Ain’t Seen Nothin’ Yet falls somewhere in between these two poles. Or rather, it alternates between feeling like a pointless exercise in playfulness and registering as utterly purposeful. Starring a who’s-who of French actors, many of them Resnais regulars, as versions of themselves, the film begins with the group being individually informed of the death of their friend, the playwright Antoine d’Anthac (Denis Podalydès), and receiving an invite to his country house. The theatricality of Resnais’s project is immediately established when the group arrives at the chateau and the place feels precisely like a stage set, complete with painted backdrop. And the theatricality continues, its presentation morphing into an endless series of guises, as the group is shown a video of their deceased friend by his butler, in which Antoine addresses them from beyond the grave, explaining that they’ve been invited since they’ve all acted at one point or another in his play Eurydice (which is of course Anouilh’s play), and that he has received a request from an amateur theatrical troupe that wishes to perform the piece. They are to watch that group’s rehearsal performance and judge the “validity of the request.”

As the play begins to unfold on the screen, the actors in the audience seem drawn by irresistible impulse to recite the lines they know by heart themselves. Sometimes, they deliver the dialogue in unison with their on-screen counterparts. Sometimes they anticipate them or lag behind. In other instances, their words simply replace those of the amateur troupe. Eventually, levels of reality (or theatricality) multiply as the actors in the audience threaten to but never quite overtake the performance they’re watching. Whole scenes are staged between the celebrity actors as they enact the roles in Anouilh’s play, sometimes simply via recited dialogue in the screening room, other times moving, as if by magic, into separate cinematic spaces that are blatantly unreal, even dreamlike, but don’t feel like stage sets—a neat disjunction also employed in Mélo.

Each actor in the audience takes on the role he or she has played in the past, the picture complicated by the fact that there are two sets of Orpheuses (Pierre Arditi and Lambert Wilson) and two sets of Eurydices (Sabine Azéma and Anne Consigny) from two different productions of d’Anthac’s play. Although Arditi and Azéma come to dominate the screen time, they alternate with, and sometimes (via split screen) share the spotlight with the younger couple in the audience and (via cross-cutting between “reality” and “cinema”) the even younger couple in the amateur troupe. As the story unfolding in Anouilh’s play, which itself features characters from the theater world, takes over the film’s attention, Resnais expertly cuts between the different settings and the different actors all combining to enact Eurydice.

It’s a tour de force of directorial navigation in which Resnais suggests that the proper relation between the cinema and the theater is to throw it all together, take the best of both worlds and present it as pure showmanship. There’s real power in both the at once stage-bound and wildly dreamlike mindscapes that Arditi and Azéma inhabit, particularly a railroad café that feels like a limbo before some hellish fate, and the bare-bones, avant-garde-infected staging of the amateur troupe whose production includes the constant motion of an ominous gold pendulum cutting through the action.

The film works best when it focuses viewer attention most acutely on the story, deflecting it away from the director’s manipulations. Resnais needn’t worry: We’re always aware of his authorial (sleight of) hand, but when he makes too great a show of his cleverness (some of the split-screen use, the mindfuck of an ending), it detracts from rather than augments the potency of the on-screen narrative. You Ain’t Seen Nothin’ Yet reminds us that whimsical playfulness and meta-cinematic explorations aren’t usually very interesting goals in and of themselves, better used as a philosophical spice to cast the source material in a new and stimulating light. That Resnais’s film only seems to have half imbibed this lesson means that it can only be termed a mixed success, but when it clicks, it feels like something greater than both filmed theater and reflexive speculation. In the synthesis, Resnais fitfully achieves a fully emotive, self-aware form of art that realizes his lifelong search for a cinema that refracts and translates the range of human experience and “experience” alike.

Review: Tales of the Night