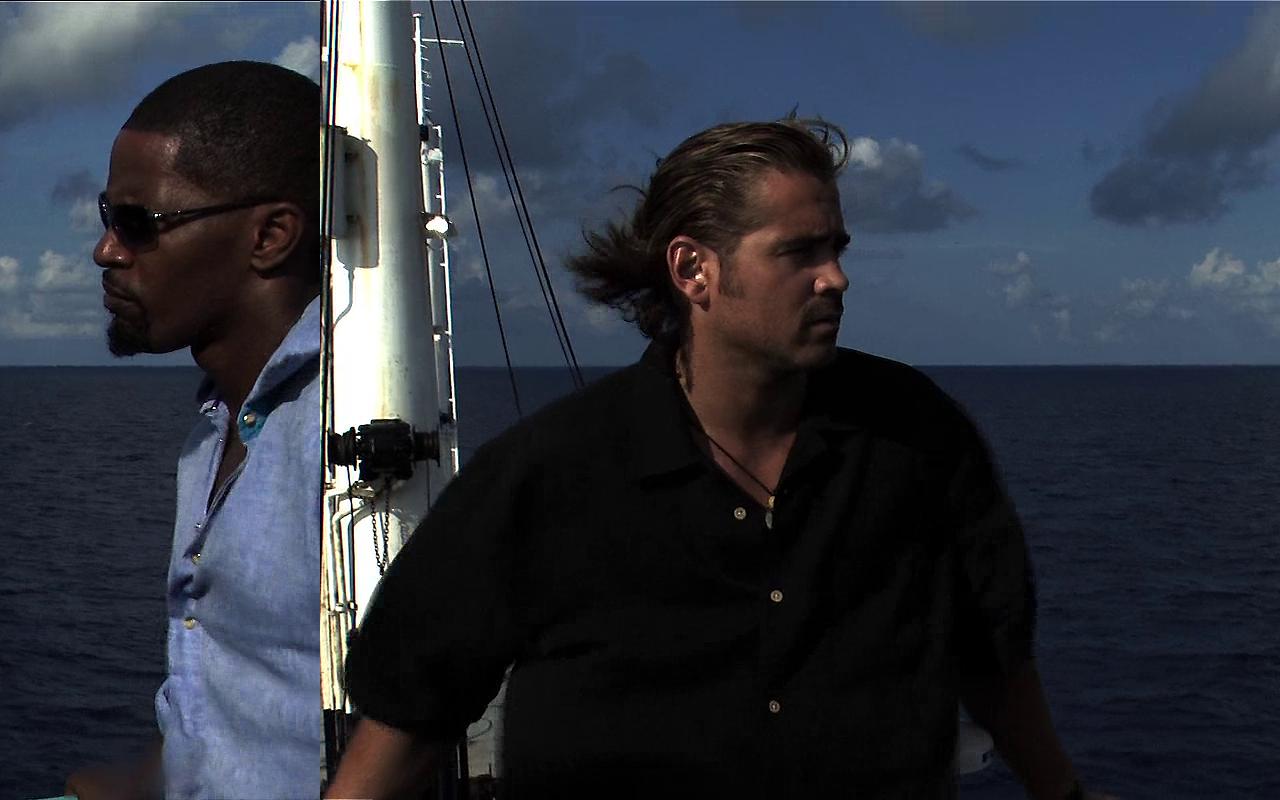 Though a good many of us might like to think otherwise, a critic is not a prognosticator, so on that basis I might be forgiven for not thinking Michael Mann had it in him to make what instinct says will be one for the ages. In retrospect it is clear that the rapturous Miami Vice is the work Mann has been building to: a streamlined, decidedly present tense rethink of the influential TV series on which he acted as executive producer. Though its tenor is unique, Miami Vice has its fair share of antecedents, among them the existential noirs of Jean-Pierre Melville, which are clearly a touchstone and inspiration for cinematographer Dion Beebe’s hypnotic high-definition palette, as well as for the overall terseness of dialogue and character (this is Mann’s first movie – great as many of them are – that doesn’t feel overburdened by implicative macho swagger). Yet the point of comparison I kept returning to – referenced by several commentators on this blog – is Terrence Malick’s The New World, and not just for the lead actor both movies happen to share.

The virtues of Malick’s film have been defended extensively enough within these pages that they need not be rehashed. Suffice to say that Miami Vice is The New World’s gangland cousin, a fully formed tone poem – intertwining spirit and eros – about characters trapped (often of their own volition) within a rapidly evolving eternal present. This is something of a change for Mann, whose characters are often trying to outrun the past, only to find it catching violently up with them. In Miami Vice there is no past and there is no future: “It is going bad right now,” says Sonny Crockett (Colin Farrell) of the botched undercover operation that sets the quite intentionally slim plot in motion, and the rest of the movie offers up several variations on the theme.

Mann’s choice to shoot in high-definition only heightens the sense of the immediate. Moreso than film, video is given to of-the-moment intimacies and digressions. Mann expands on Jonathan Demme’s example in the nouvelle vague homage The Truth About Charlie, where the characters quite literally dreamed in DV. Vice transposes the medium’s inherent dream state onto its characters’ realities: Mann’s mise en scène feels preternaturally caught between REM sleep and waking life, always one step away from the bubble bursting, from the destruction of a tenuously maintained nighttime reverie. Perhaps this tension – this fear of awakening into a helpless stasis – is what gives rise to the errant tear in the eye of white-collar criminal Isabella (Gong Li) during her sex scene with Crockett (at that moment partially play-acting his drug-smuggling alter ego Sonny Burnett). As the duo say flat-out in a subsequent conversation, they know their relationship has no future, though awareness of the likely outcome fails to still the murmurs of their hearts.

What does make these people tick? Mann, more often than not, leaves that for his audience to decide, allowing the characters’ glances to speak multilayered volumes. Mann tips his hand during an early shower/sex scene between fellow vice cops Ricardo Tubbs (Jaime Foxx) and Trudy Joplin (Naomie Harris), cutting between the actors’ faces and what are quite clearly torso body doubles. It’s a knowing jest that, by itself, would play with an off-putting level of cruelty more appropriate to the disdainful aesthetics of Michael Bay or Tony Scott. But for Mann it is merely prelude to Tubbs and Trudy’s tender sex scene, which begins with jovial embarrassment via a play-acted premature ejaculation and climaxes with Trudy (whose point-of-view is favored in the scene) gently talking her lover to sleep. Only then does Mann’s artifice reveal itself as more than a cheap joke – this is how Trudy and Tubbs view themselves with each other. Intertwined in a lovers’ secure embrace, there is nothing but the moment and the intimacy is infectious.

There are very tangible threats to this sense of peace, but Mann never turns hypocrite, exposing one or the other as complete falsities. More often than not, intimacy and intimidation are shown to exist within the same moment, as in the shower scene between Crockett and Isabella, which Mann conceives as a direct homage to Hitchcock’s Psycho, though the knife blows, in this case, are psychologically charged kisses that give way to a no less stimulating business discussion as the duo barter percentages before a bathroom mirror. An even more mesmerizing example is the climactic scene where the vice squad rescues Trudy from a gang of drug dealers. The sequence favors fellow detective Gina Calabrese (Elizabeth Rodriguez) as she faces off with a white supremacist who has his thumb poised over a detonator. He invokes the received wisdom that, if shot, his finger will twitch and the bomb will go off. “That’s not what happens,” says Gina, before launching into one of Vice’s few moments of prognostication. She explains that a well-placed bullet to the medulla will render him effectively lifeless and while she speaks, her words (“What will happen is… what will happen is…”) bordering on incantation, Mann’s jittery camera settles peacefully, lullingly on her lips. We don’t even sense the bullet coming; when it does it achieves a kind of multilayered relief, though it would be reductive to label this as merely a crowd-pleasing moment.

Indeed, the violence in Miami Vice is devoid of any kiss-off superiority, as illustrated by the movie’s exquisitely realized final shootout (unlike many of his contemporaries, Mann masterfully delineates the visual and aural space separating bullets from their targets). When Tubbs dispatches the mid-level drug dealer José Yero (John Ortiz), our cheers catch in our throat because of the sheer messiness of his demise (the spattered blood is a visual rhyme with Tubbs’ earlier invocation of Jackson Pollock) and by the character’s quietly numbed exhaustion after pulling the trigger (wit rarely comes easily to those under life and death pressure). And if that isn’t enough to temper our gut reactions (like Narcissus’ aqueous mirror, I think Vice does more to reveal than to satiate its audiences’ predilections for bloodshed), Mann quickly returns to what the scene is actually about: the dissolution of false identities and the resulting emotional fallout between Crockett and Isabella.

That Miami Vice is, above all else, a love story should come as no surprise to the Mann or TV-Vice obsessed. At its best the television series achieved the heady rapture of a museum video installation (MTV by way of Chris Marker). There is perhaps no greater example from the series’s run than Crockett (Don Johnson) and Tubbs’ (Philip Michael Thomas) nighttime drive in the Pilot episode, a brazenly homoerotic mix of cocking guns, charged glances, and a throbbing Phil Collins backbeat (only Mann could make Phil the Shill’s mind-numbing melodies mythic). The movie Vice is more palpably heterosexual, though Mann retains the queer charge in the Crockett/Tubbs relationship, illustrating it – via the bookend images of Crockett walking through doorways (once into the dark of night away from his partner, the other into the white light of a hospital entryway to rejoin him) – as a friendship torn subtly asunder and finally reconstituted (as suggested by the atmospheric lightning flashes and thunder cracks that pepper various scenes throughout) by a concomitant sense of spirit, a deep-rooted virtue that offsets and transcends the characters’ necessary displays of vice.