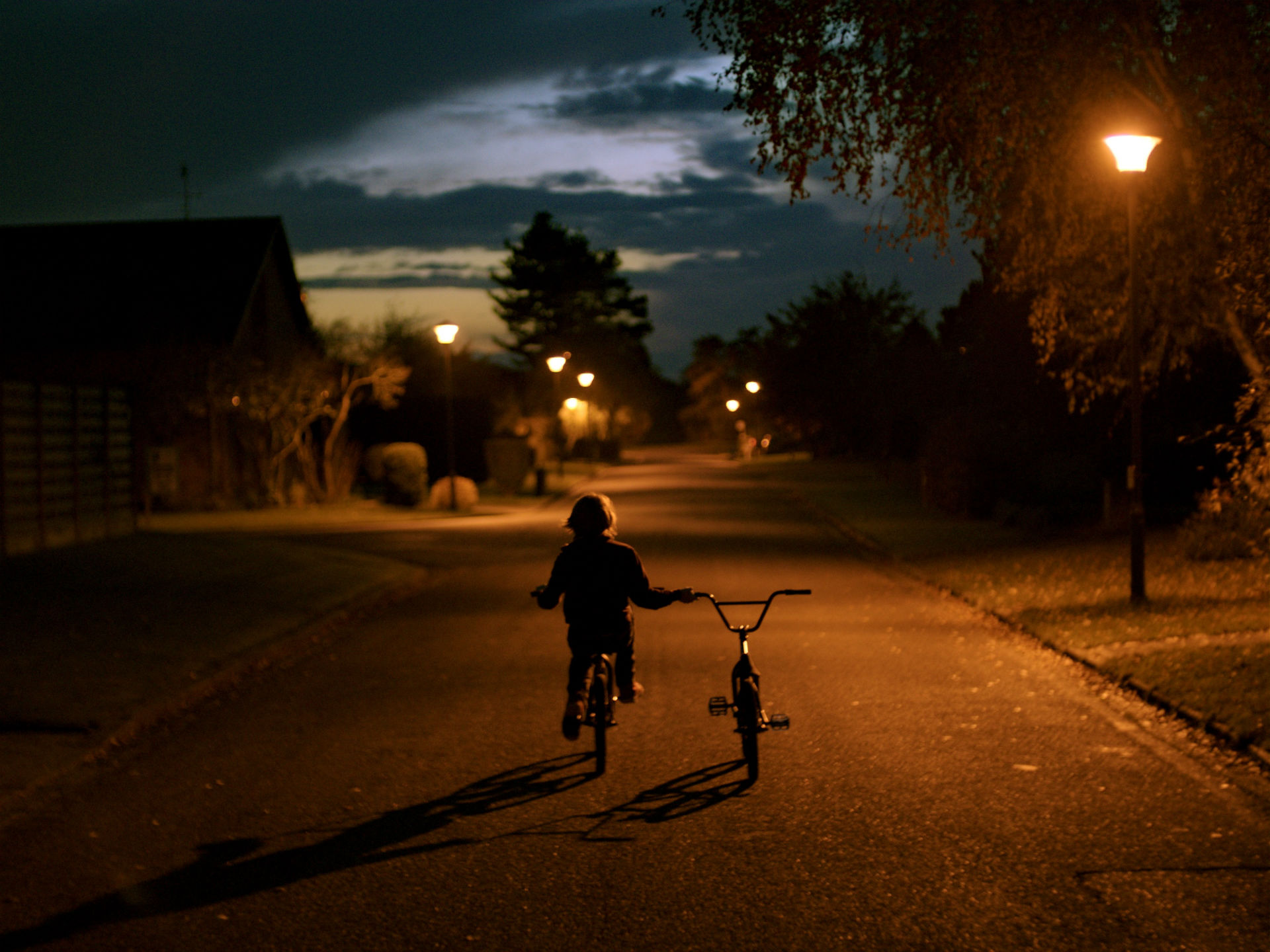 In one of a few surreal, extended shots in Violet, a group of BMX bikers sail through a series of jumps at a bike park in the woods of northern Belgium. Cinematographer Nicolas Karakatsanis places his camera behind the lip of a hill, so we only catch the kids in flight, nailing spins and tricks in a calm, precise rhythm. It’s a lovely image of group movement and youthful boldness, of teens rising and then serenely hurtling through space. Inexperienced and fearful, Jesse (Cesar De Sutter) can only observe this easy display of grace and bravado from a distant perch. He becomes a captive to the film’s stunning vertical compositions after his adolescence is stunted by a random tragedy.

Violet’s inciting act is a murder in a local mall, which writer-director Bas Devos captures on an array of CCTV monitors. In one screen, we see Jesse and a friend towing a BMX while window shopping; in another, a second set of teens do the same. The pairs meet on one monitor as a security guard, caught in the reflection of a screen, exits the room. Jesse’s friend Jonas is abruptly stabbed, at which point Devos cuts directly to the crime scene, where Jesse hesitates as the victim crumples to the ground and dies. There are no computers and just a couple of cellphones in Violet, but Devos persistently suggests Jesse’s isolation from a connected social network: There are intimations of his notoriety as members of the BMX community interrogate or confront him about the incident; sometime after the murder, he sits back on his bike as a large candlelight vigil passes him by. Filtered through prismatic lighting, abstract images of streaming video bracket sequences of the film.

With its aggressively artful visuals and its muted observation of a kid managing the wake of a horrible death, Violet can’t help but call to mind Gus Van Sant’s Paranoid Park. Devos’s film, though, is often distant and impassive where Van Sant’s was searching and tender. (In this way, it’s not unlike Van Sant’s own Elephant.) After one shot too-crudely explains that Jesse feels like he has blood on his hands, the murder renders him a voyeur to both adolescence and the process of grieving. He’s largely impassive through group bike rides, and he’s drawn to the home of Jonas’s family. In one memorable shot, he watches them retreat into their bedrooms, which are filmed as isolated and dimly glowing boxes of grief. Devon inserts a few moments of aborted confession, but he’s most comfortable employing images to conjure Jesse’s troubled psyche. In a long, single-shot scene at a Deafheaven concert, the flicker of strobe lights manipulates his face into a frightening variety of countenances.

Outside of that Deafheaven sequence, Violet’s acoustics are spare, fixating on environmental noises that are alternately natural and mechanical. When Jesse pays a visit to Jonas’s father, he’s left alone in a dining room as the din of a coffeemaker takes over the soundtrack. He rises early one morning to the overwhelming titter of birds and insects. Both instances point to Jesse’s heightened sensitivity, and lead to moments of reckoning that are both pivotal and elliptical. Devos’s impressive debut bores into the mourning process and its piquant combination of emotional numbness and sensory vulnerability, rigorously avoiding finding an easy way out of this quagmire. Instead, Violet culminates in an astonishing eight-minute tracking shot: Like the film’s young biker, it glides quietly through a Flanders neighborhood before arriving at a phenomenon that levels perspective and leaves you feeling hopelessly, overwhelmingly adrift.